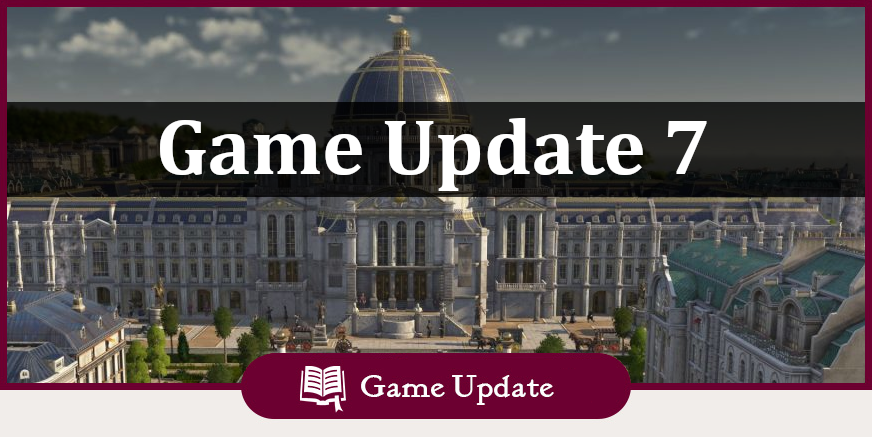 Game Update 7 adds support for our first Season 2 DLC, “Seat of Power”, for all Season 2 Pass owners. “Seat of Power” will also be available as a stand-alone purchase from March 24 onwards.

Added three exclusive ornaments – the “Palatial Column”, “Ploughman’s Glory” and “Elephountain” – for owners of the Anno 1800 Season 2 Pass to the game.

We are introducing three separate difficulty levels for the influence system, which dictate how much influence can be earned. Easy has you earning more, medium remains the same and hard less influence. This can be selected during game creation, or when loading an existing save game for the first time. Please note that this selection is permanent and cannot be changed after.

Improved the multi-copy feature so that streets can now also be copied in the same manner as buildings.

Introduced the ability to block needs supply in the Marketplace object menu.

Specialists related to the diving bell system from “Sunken Treasures” have been removed from most item pools, such as Eli Bleakworth’s and the Visitor’s pool, and are now exclusive to Old Nate’s sold item pool and quests. Additionally, we adjusted the chances to receive the Legendary Diving Bell Specialists to fit this new distribution.

Improved the main menu to give you a better and clearer overview of available and owned DLCs.

Improved the visualization of street connection when placing blueprint buildings next to streets. Now, a blue overlay will be visible over affected areas.

Various performance improvements to the overall gameplay experience have been made.

The statistics menu has been improved to also take bonus production due to buffs into account.

We made some adjustments to a total of 9 items that give a bonus to attractiveness. You can find our thoughts behind these changes in this blog post.

Improved overall performance for extremely large save games with a huge number of buildings and residents.

Adjusted behavior of trade menus so they don’t close automatically after a purchase is done, as requested by many in the community.

Adjusted the right click menu so that it’s adaptable to session-specific buildings.

Improved the visuals on the expedition captain for “The Passage” expeditions.

Improved copy mode so that quay is selectable now.

Adjusted some words that triggered the profanity filter incorrectly.

Made the upgrading of blueprint modules such as wheat fields and cultural modules via shortcuts more consistent.

Improved the city decoration category in the construction menu for alternative sorting.

Adjusted the way fields for text react when hitting ENTER key after entering some text.

Improved text in info tips where values could be very high,  such as influence or population in the top bar menu.

Improved the way railways interact with streets in the New World.

Improved automatic rotation for the residence buildings of engineers and artisans so that they connect better with each other when placing them.

Improved the behavior of keyboard input for values when setting minimum stock.

Improved icon for the engineer displayed in the top bar menu.

Improved the usability of the “ESC” button when interacting with items such as “Father’s Diary” in the campaign mode.

Improved usability of “jump to” buttons and texts in the statistics screen.

Improved the animation for upgrading a building from a blueprint.

Improved the visibility of ships in Trade Routes scrolling menus when the player owns many ships.

Fixed an issue where the game could crash while assigning ships to the zoological expedition while using DirectX12.

Fixed a stability issue when attempting to open expedition screens.

Fixed a stability issue which could occur upon closing the game on Windows 7 and 8.1 operating systems.

Fixed an issue with multi-copy for module blueprints. Previously, some farms with modules could be copied with only the modules, while “forgetting” the main farm.

Several random crashes and desyncs have been fixed.

Improved relocation of the harbor building when attempting to move it to the other side of the island.

Previously it could happen that some areas would incorrectly appear to be blocked.

Fixed an issue where the treaties menu could appear empty if the player was in an alliance from the beginning of the game in multiplayer mode.

Fixed an issue where repeated clicks on residences could disable the “Esc” shortcut.

Fixed an issue with newspaper happiness effects not being properly applied.

Fixed an issue with some monument progress being reset after a save and reload in the middle of construction.

Fixed an issue that could prevent the copying of railway tracks under certain circumstances.

Fixed an issue with ships escorting other ships on trade routes without being ordered to do so. I am going to have to ask you to calm down, escort ship!

Fixed a situation where goods could be incorrectly reserved in case an expedition ship would have been destroyed while loading goods and before leaving for an expedition. Please note that this fix will not apply to save games where this issue already exists, though you should be able to reset the activations by starting and preparing another expedition at the affected harbor.

Fixed an issue in the “Botanica” DLC where Botanical Gardens do not receive maintenance reduction influence bonus.

Solved an issue where the Taiga set bonus would incorrectly reduce the consumption of Goulash.

Fixed an issue where feedback ships (such as the workforce transfer ones) could get stuck in rare occasions.

Fixed a performance issue where opening a save game menu with a lot of save games could get the menu stuck for a few seconds.

Fixed a rare occurrence where too many riots would trigger too many NPCs simultaneously.

Fixed a rare issue with trade routes where a route could break due to an improperly removed connection.

Fixed a rare occurrence where a ship tried to continue loading goods after the trading post on the target island was destroyed. Sorry ship, they are all gone!

Improved behavior for firefighters so that they don’t extinguish fires out of the range of their fire station.

Fixed an issue with additional construction options not displayed correctly in the shipyard object menu. Away with you, “wharf bug”!

Various UI fixes for the trading system in expeditions. Feedback should be smoother and info tips should have better visibility now.

Adjusted some edge cases where the “Join Game” invitation in multiplayer could incorrectly block some slots.

Fixed the visualization of cargo slots for ships with more than 3 slots in Expedition screens and trade menus.

Adjusted the way construction menu pins work for buildings and ships after reloading a multiplayer save file.

Fixed the display of the voice chat panel in multiplayer which could overlap object menus when playing with more than six players.

Fixed an issue with vanishing propaganda articles in the newspaper menu in co-op mode.

Improved UI visualization for the time of day menu.

Fixed an anti-aliasing issue in the statistics screen for the production line graphs.

Fixed a graphical issue with mine ruins.

Fixed minor UI issue with the missing “back” button in the profile creation screens.

Improved open and close animations for the quest book.

Changed the icon in New World’s construction menu to properly show the paved street in the Obrero section.

Fixed an issue with disappearing info layers after reloading a game.

Fixed an edge case where the character would not show up when opening the competitor selection menu in the Multiplayer Lobby.

Fixed placement of the icon displayed next to the mouse cursor when dragging items and resources.

Fixed an issue with the flyout displaying incorrect costs when upgrading a Malthouse from blueprint.

Fixed an issue in co-op with “Jump to Player” buttons being visible after loading a save game alone.

Fixed an issue where switching pages in the Portrait/Color window of the multiplayer lobby using the top buttons doesn’t update the arrows accordingly.

Fixed  visual issue which could occur on uncommon resolutions with object menus.

Improved quality of UI elements in the DLC selection screens in the profile creation flow.

Solved an issue where ships such as Battlecruisers which have 4 item slots break the UI when opening a trade menu with second or third parties.

Solved a graphical issue where paved road crossing sections would not match in color.

Fixed a postcard mode issue where the camera could be moved out of the playable area in rare circumstances.

Improved the visibility of item slots in the trade menu for ships such as the Clipper which have only one item slot.

Removed the carts from ruined mine buildings.

Adjusted the placement of feedback units for certain buildings like the Church to remove clipping issues.

Improved the UI behavior for closing a hostile takeover screen.

Improved the header of the Airship Hangar menu in “The Passage”.

Added the info tips for the Save/Load buttons in the difficulty levels menus during the game creation flow.

Adjusted the positioning of the info tip displayed for “Workforce assignment” in object menus such as shipyards.

Adjusted the info tip text for the unlock conditions of the Paved Street in the New World.

Improved the visuals displayed in the marketplace when only one tier type is present.

Improved the visibility of the airship from a distance.

Improved button states for the toggle buttons present in the statistics screens.

Adjusted altitude for the airship when passing through tall buildings such as Madame Kahina’s Harbor.

Adjusted the info tip to display correct information in the Oil Harbor when not all trains are unlocked yet.

Adjusted filter highlights when switching between UI elements in the Warehouse and Harbor.

Fixed a situation in the “Sunken Treasures” DLC where “The Great Exhibition” quest could be triggered twice.

Fixed background display in the quest book for the quests “The fellowship”, “A novel proposal of Captain Nobody’s” and “The Nameless Author”.

Fixed an issue with “Beyond the Horizon 2 – A different Point of view” which could have triggered without meeting Isabel Sarmento.

Adjusted text for “Wonders of the Arctic” quest from the “The Passage” DLC.

Fixed the position for the demolitions expert in campaign mode to prevent him from spawning in water.

Fixed text display issues on info tips for some items such as the “Heated Jacket”, info tips of the construction menu and influence top bar info tips in several languages.

Fixed loading tips which were too long for some localizations.

Fixed text for several expeditions in the Spanish and Polish localizations.

Fixed localization issues for some cut-off text in the influence menu.

Adjusted text for the “Frogman” article in the newspaper.

Fixed a text issue present in the exhibit object menu of cultural buildings when an item is equipped.

Fixed a text issue present in the info tip in the diplomacy screen.