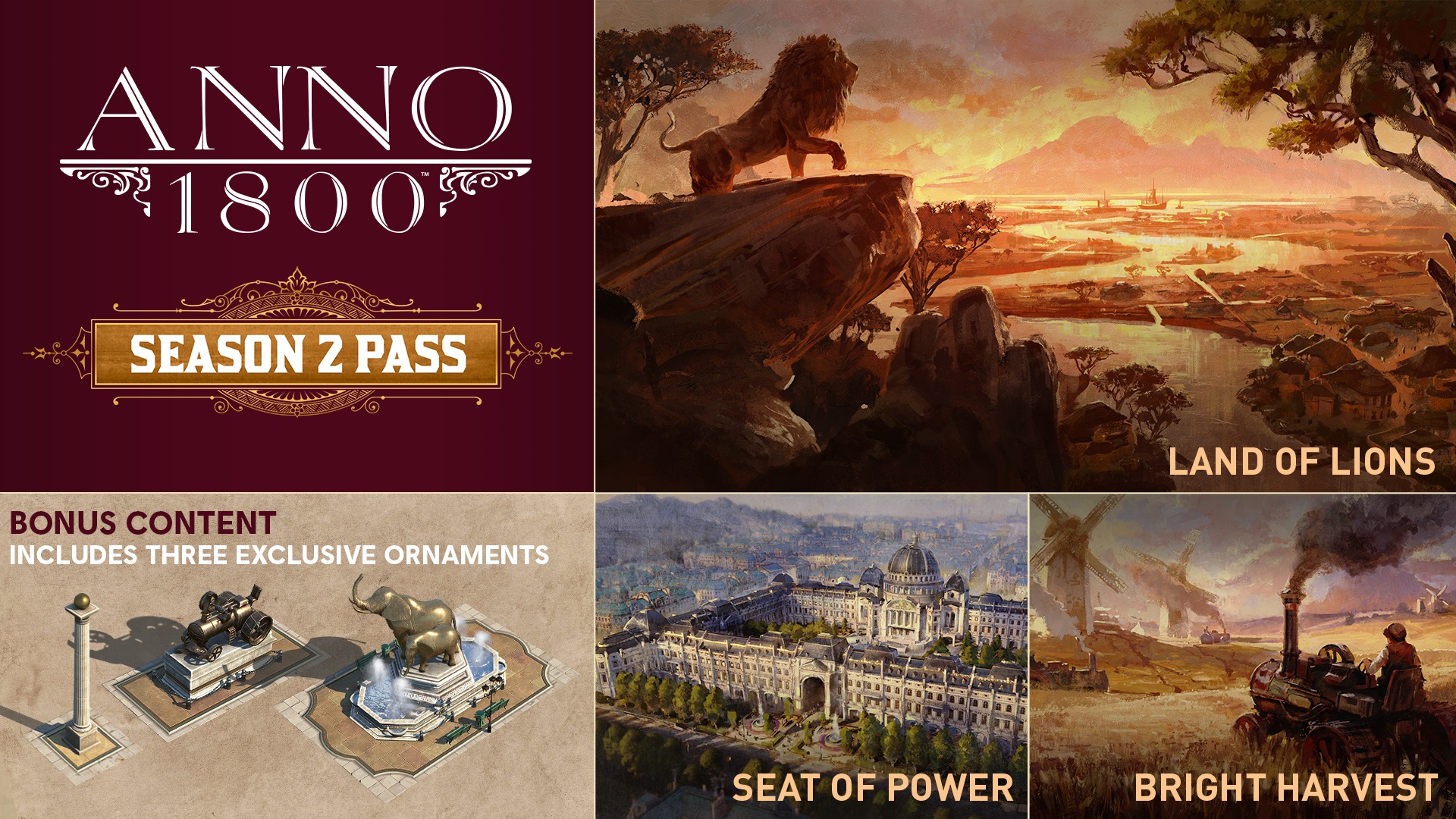 Prior to the release of The Passage last December, we excitedly announced our plan to deliver even more Anno 1800 to our 1 million+ pioneers of industrial revolution throughout 2020. This presents a unique opportunity for the Anno team, as it means that Anno 1800 will be receiving more postlaunch support than any previous game in the series! In the past, development of content has ended a year or so after the release of an Anno game, with the team moving on to the next title. With Anno 1800, we are excited to have the chance to flesh out the world of the industrial revolution even further, with new systems, citizen tiers and yes, even a new continent. Enter stage right: The Anno 1800 Season 2 Pass, which will be adding three exciting new DLCs to the game this year!

It all begins later this month with our next DLC pack, Seat of Power, which allows you to construct a magnificent palace fit for the ruler of an industrial empire. And while we know that our modular buildings like the zoo or botanical garden are big hits with beauty builders, the palace has an altogether more profound impact on life in your capital. As the eponymous Seat of Power, the palace will house several departments, each giving you not only a passive bonus, but also the pick of several policies that you can use to influence different aspects of life in your city.

Speaking of influence, we would be remiss if we did not mention our free Game Updates. As with Season 1, each of our three Season 2 DLCs will release alongside a free Game Update that will further improve and enhance the game for all Anno 1800 players. With Game Update 7, we will tackle one of the most discussed game systems by adding three separate difficulty tiers for the influence system. With this change, you can select whether you want to earn more, less or the same amount of influence as you currently do. And yes, this will also apply to existing save games, asking you to pick a difficulty the first time you load up your save game!

With our second DLC, we are taking the technological marvels of the second industrial revolution to the countryside, allowing you to boost your farms’ productivity to unknown heights! To do so, you will place new tractor modules on your farms, which will increase the overall productivity of the farm, while also lowering the required workforce. Depending on how many farms you have, this could mean a whole lot more space on your islands, and we can’t wait to see what you do with it! Of course, you will have to make sure that your tractors don’t run out of fuel along the way…

To round out the theme of industrialization, Bright Harvest will also include a new selection of farming-and-industry-themed ornaments, to make your cities feel even livelier.

We bet you didn’t see this one coming, eh? Jokes aside, we know that the community has been clamoring for an African-inspired session in Anno 1800 ever since we first announced that the game would be using the Session system, way back in 2017. Good things come to those who wait, and we are happy to say that Land of Lions will be the biggest DLC for Anno 1800, including a new session and continent, new citizen tiers, buildings, production chains and quests. In a new storyline, you will travel to the drylands to join up with Emperor Ketema, as he works to turn his lands green.

You will do so using the new irrigation system, making smart use of what little existing water there is on the map to construct a network of canals and fertile patches of soil. Anno veterans will notice similarities to Anno 1404’s Noria, though Land of Lions puts an all-new spin on the timeless fantasy of making the desert bloom. We also listened to your feedback regarding the Passage, and rest assured that Land of Lions will have a deeper impact on things in the old world! We will have much more information about all the new content later this year.

The Season 2 Pass is now available!

In addition to these three DLCs, buyers of the Season 2 Pass will also receive three exclusive new ornaments when Seat of Power launches on March 24th— so enjoy your first look at the appropriately-themed ‘Palatial Column’, ‘Ploughman’s Glory’ and ‘Elephountain’.

The Season 2 Pass for Anno 1800 (including Seat of Power, Bright Harvest, Land of Lions and the three ornaments) is now available for purchase from Epic Games Store, Steam (Update: The Season 2 Pass sadly won’t become available on Steam until Seat of POwer and Uplay, for a price of 24,99 $/ €, which will represent a saving of 9,99 $/ € versus individual purchase of the three DLCs. We can’t wait to show you more about all three DLCs, and our free Game Updates over the coming months!