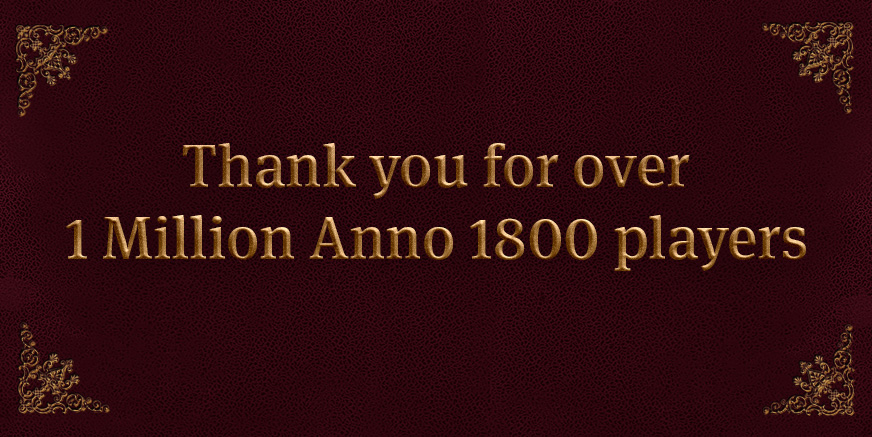 happy Monday. And what a great Monday it is! Not only did we just reveal our plans for Season 2 of Anno 1800 (which begins in just two weeks with our next DLC, Seat of Power!), but we also want to share and celebrate a special milestone with all of you.

2019 was an incredible year for the Anno 1800 team. From seeing our game becoming a hit on Twitch during the Closed Beta in January and the game’s launch in April, to three DLCs and lots of improvements throughout the following months, it was quite the adventure. We even won a lot of awards (and were nominated for even more)! The last highlight of the year came in December, when – thanks to all of you! – Anno 1800 reached the milestone of more than 1 million players after less than nine months on the market, confirming its status as the fastest-selling game in our beloved 21-year-old series!

1 million is obviously a huge number, but how does that translate into the world of Anno’s gameplay? To give you a better idea of all the shared achievements of the Anno community, we have put together this handy infographic, showing some of the mind-boggling numbers that can be reached when over 1 million Annoholics get down to business.

Of course, it would not be a proper celebration if we did not invite everybody! So, if you have to yet take the plunge into the industrial revolution, you can test Anno 1800 for free from March 12-15*. The Anno 1800 Free Weekend will give you access to the first three tiers of Sandbox Mode, as well as multiplayer and co-op mode. The pre-load is now available via Epic Games Store and on Uplay, and you can see the exact times of the Free Weekend on Uplay below.

Here is to an exciting Season 2!