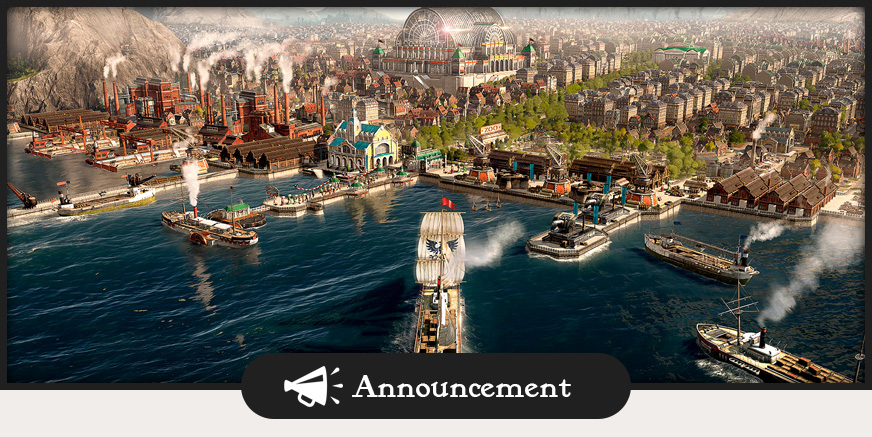 In today’s Union Update, we reflect on the Closed Beta. Plus, make sure to read all the way to the end for a special announcement!

Thank for making our Closed Beta a full success
Wow, what a week it has been for all of us on the Anno Dev Team! So, where to start? First by saying “Thank you” to every single one of you who has participated in our Closed Beta- you managed to not only help us reach, but actually crush our expectations for this test. From the number of players, to how often you came back and how long you played during these few days, we were truly humbled by your dedication to helping us test Anno 1800.

We also want to thank everyone who created content for the game, be it live streaming, videos, screenshots or even creating the first cheat sheets and tools to calculate the most efficient production chains. Many of us on the team were glued to our various screens to watch streams and videos throughout the test, and we have to be honest with you: seeing “our baby” reach the #5 spot for most viewed games on Twitch on Friday night was more than just a little bit surreal. Fair to say that you all made our day(s), and that seeing all this excitement will be a great morale boost for the team as we tackle the feedback reports in the weeks to come.

But of course, it is not just about making us feel all warm and fuzzy inside. Watching so many different players of all experience and skill levels was also very helpful for our game and UX designers as they were able to check many of our assumptions and guesses how players would behave as they get familiar with Anno 1800 against real player behavior.

Your Feedback, and how we will act on it
Which brings us to your feedback. Not surprisingly, we have received plenty of feedback from you, ranging from crash reports to bugs, wishes for improvements and praise for new gameplay elements you love (like the blueprint mode).

While we will not be able to comment on all of them, there are a few hot topics for Closed Beta testers:

Announcing the Anno 1800 Open Beta
With all that said, we want to leave you all with a special treat to show our appreciation- the Anno 1800 Open Beta, coming April 12th-14th. So what does Open Beta mean? Just what it says on the cover- it will be open to anyone interested in testing the game prior to launch! No need to sign up, no need to cross your fingers to receive a key- just download the Open Beta client, and start playing once it goes live on the 12th.

AnnoAfternoon – The Age of Steam – February 8th 4PM GMT
Save the date once more, as our Community Team takes to Twitch again to play Anno 1800 with you. We’re going through the Closed Beta Build and will be happy to follow suggestions from the community as to how we should build.

And that’s it for this week’s Union Update. Thank you, and se… oh, you want one last final teaser? Okay then: the Open Beta will give you access to some new content that was not playable in either the Technical Test or Closed Beta.