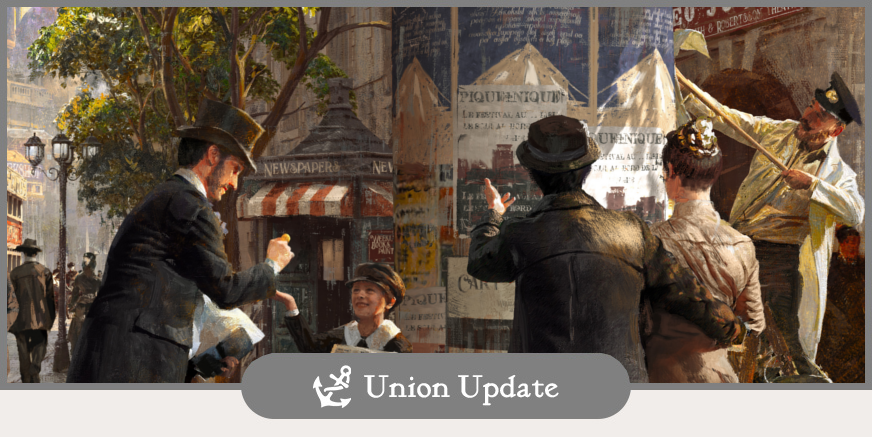 Hello, and welcome to another short, but nevertheless important Union Update! This time we will cover the release of today’s Game Update 2, give you first information on GU 3, and also tease you about our next major content release, The Anarchist. What fun!

Game Update 2 is out now

By the time you are reading this, we will have already released our Game Update 2, which includes a broad variety of bug fixes and balance adjustments. You can find the full list of release notes for this 850mb update in last week’s Union Update.

Coming up next: Game Update 3

Of course, there is no rest for the wicked, so we are already hard at work on our next game Update. While it is too early to go into details on the many fixes we are planning to include, we wanted to give you a first glimpse of what you can look forward to:

This Game Update will be released alongside the coming release of The Anarchist. Which naturally brings us to…

Coming next week: Our DevBlog on the Anarchist

As previously announced, our first big content release after launch will be The Anarchist character, whom you can already secure today by buying the game’s Digital Deluxe or Pioneers Edition of the game (or via the Digital Deluxe Edition Upgrade). Next week, we are planning to give you much more insights into this unique new NPC opponent and content, and some of the major ways in which he will differ from our existing cast of characters. Without giving too much away, let us just say that you will want to keep a close eye on your own islands when competing with his charismatic demagogue. Never underestimate the dangers of anarchy…

You asked for it, so here it is: The much asked-about “Anno Union Emblem” company logo is now available for redemption from the Club Rewards section on Uplay. So go forth and represent the Union!