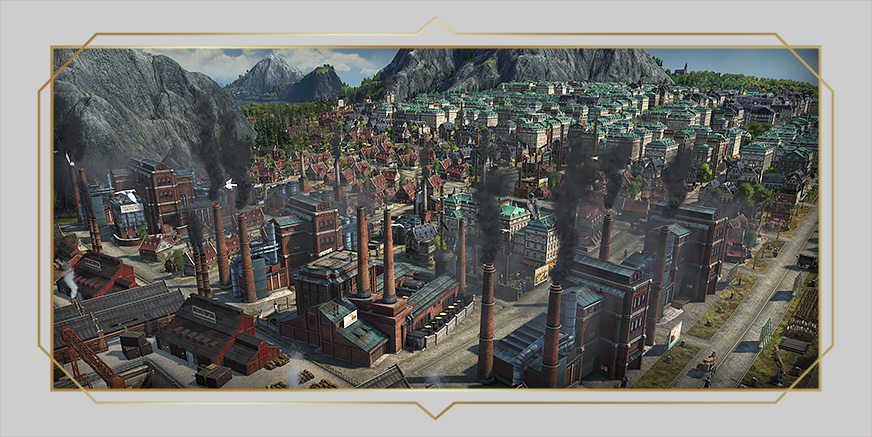 It might be the coldest month of the year, but neither the development nor the Anno Union suffers from the winter blues. As announced, we will relentlessly bring you weekly DevBlog’s about fundamental core mechanics of the series. This week, you can look forward to the start of a whole series about Anno 1800’s residential tiers. We will highlight the artistic vision behind their design, their importance for the setting and their importance for Anno’s gameplay!

Talking about passionate topics: we want to say thanks for everyone participating in the island contest. We got flooded with a crazy amount of amazing entries and our team is currently going through every single one of them in order to present you the finalists as soon as possible. A big thumbs up from the team!

Some time has passed and we will announce the winners of or previous writing contest soon. We made our choice already and had a cool idea how we could properly present the winning stories. This caused a slight delay but rest assured, we lift the curtain in an upcoming Union Update.

Another update about the next AnnoCast and the Community Roundtable is on the horizon. We got plenty of feedback about the first roundtable and we guess that many of you look forward to another evening chat between the Anno Union and the development team?

Before we head over to the community Q&A part of the update, we like to give you some general information about the focus playtest: We all know that you can’t wait to hear more about the tests, specifically their exact starting date. Please keep in mind that the tests are under a strict NDA, and therefore, we won’t provide full coverage on the tests. However, we will briefly talk about the focus-playtests in blog articles and let you all know when they invitations for the first group are out.

Drake-1503
Resources are important for almost all strategic elements of the game, so please give us adaptable and varied settings when generating an endless-match. Why shouldn’t it be possible to just define the amount of resources? “Unlimited – high – low” would be sufficient to create a rich variety of scenarios and end the endless discussions about the pros and cons of unlimited lodes.
Sebastian: Limited lodes would make the flow of the game much more convoluted and interrupt the gameplay, especially in the already more complicated late game portion of a match. Furthermore, you will be able to claim a high amount of islands across different sessions in Anno 1800. Micro managing every single one of them could end up being quite a daunting task.
Let’s say we have limited lode capacity, that means we would need to create interesting systems to refill the resource lodes.  Just using “a bit of cash” to refill them would not be enough, because think about it: how wants to be frequently reminded that one of your dozen mines depleted just to press a simple button. That is neither challenging nor fun.
We would be able to create a nice system around it, but it would cost us time developing said feature. Even if it looks like a minor feature, we would need allocate time from other content to realize it. Up to this point, the feature just was not that important for us in order to push something else back. The plenty of feedback we got in the last DevBlog made us realize how important a complex lode system is for the community. For that reason, our team will start an internal discussion based on your feedback.

TheYSeaMeRoamin
It might be worth to think about making content, which is matter of controversy in the community, just an optional part of the game. That would allow everyone to create his or her individual game experience. In that case, you would also need to be careful to not make the customization options too complicated but still offer enough to allow for an exciting variety.
Basti: We always need to keep the overall scope of the development in mind. We want to give you a broad variety of game options, as replay-ability is for the community and for us an important aspect of an Anno game. As you mentioned it already, we need to be careful to not overwhelm players with too many options, as just “adding more” is not always beneficial for the quality of a game. Here comes the Anno Union into play, as the program allows us to present you features to get detailed feedback from our communities.

Mark-WilliamK
I hope that you will be able to see steam powered machines used in production buildings, as it was the time where steam became a part of agriculture and heavy industry alike.
Basti: As mentioned in the last stream, the technological advancements of that era will be represented in the game in various ways. Keep an eye on the blogs of the upcoming weeks, as we will walk you through the core elements of the game and through the advancements of the 19th century. With Anno 1800, progression should feel like a journey through the century.

Azrael5111
So far, blogs got always released on a Monday or Thursday and between these days, I check the website only on occasionally. How about the option to opt in for a newsletter, which informs you when a new blog is online?
Basti: We usually aim for the same frequency of days to publish our blogs but sometimes, the amount of blogs or even the publishing date can varys. We got some good feedback about that during our community roundtable and we plan to bring you a chance to subscribe to the blog with the next web update. It probably will not be a classic newsletter though, as we want to reserve that for important events and topics.

ruuti0
I heard that people who work in Ubisoft usually have a Degree (University Degree), but what kind of education people who work in Quality Assurance team exactly have?
Dorina: There is no special “tester degree”. We have very different background in QA. Political scientists, Geographers, Sociologists, Media Designers and Computer Specialists. This is important, as these allows us to have a diversified expert view on the product. The different mindsets are incredibly valuable when identifying issues. Beside this, the company permits the testers to get their ISTQB-Certificate (specific software testing certificate).

Arandur87
I am curious how you can get into game development yourself, especially how you can land a job in QA or QC?
Dorina: Many colleagues in our QA department started in a temporary position and during their time here, they demonstrated their skills and passion for the project.  That leads to many QA tester starting as career jumper or newcomer to game development.

schwubbe1980, Squ4wk, Oldsmobile1963, DiruKamachi
About difficult issues and the amount of bugs during development….
Dorina: It really depends on the scope, size and the lifecycle of a project. During the various development stages of a game, you encounter a high amount of bugs, which also absolute normal state for every project. Think about it, before a game comes together during Alpha, it is a bare framework of features, which are not fully integrated into the game yet. Bugs are prioritized by the impact on the game and how long it will take to solve them. Based on that evaluation, every issue has an estimate of workhours it will cost to solve it. The real bug hunting becomes interesting in the later stages of the game, when many if of the features get implemented into the client as we come closer to the final release version of the game.