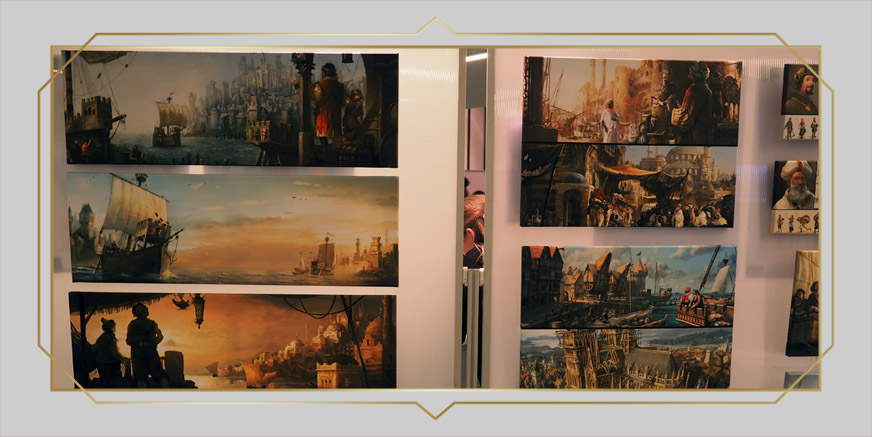 Welcome back to our Anno Union Community Update after the short bank holiday break last week. As some of you may know, October 3rd is the German national Holiday as we celebrate the German reunification, and this year, the official ceremonial act took place in our home city of Mainz. That is why we at Ubisoft Blue Byte also took part, with a small exhibition of some of the prettiest concept art from Anno 1404, 2205, The Settlers, Champions of Anteria and Assassin’s Creed identity. In addition, we had one of our Senior Concept Artists, Ramón, do live demos where he drew some concept art for visitors to watch on a big screen. Good times were had, and we greatly enjoyed the chance to tell attendees of the event more about our work and the art of game development.

Moving on, with a short update about the next big Anno Union vote: With our Monument blog, we asked the Union for ideas about World Fair Exhibitions and you clearly know how to deliver. Our team is currently going through all your great ideas and we will be able to kick off the next vote soon.

Time for the first AnnoCast!

The next agenda point is an announcement many of you waited for: The first AnnoCast will air this Friday, 5pm CEST on twitch.tv/ubisoftbluebyte

The AnnoCast will be our new Anno Union Live Podcast on Twitch and we plan to add more formats such as developer streams and Let’s Play sessions to the channel in the future. In our first episode, Creative Director Dirk Riegert and Int. Brand Manager Marcel Hatam will join Community Developer Bastian Thun to discuss the Anno Union and answer your questions. We hope that many Anno Union members join us during our show.

If you have questions for the QnA part of upcoming podcast, feel free to drop them in the comment section below.
But please keep the questions spot on and brief, as we have to read them out loud during the show!

Finally yet importantly, we have another shout out for our Anno communities out there: The Anno Subreddit!

And with that, we hand over keyboard to Logon, admin of /r/Anno:
I started the /r/anno community because all the Anno subreddits where game specific, and this would cause the community to splinter between games. The subreddit started when Anno 2070 was about to be released but I still mostly played Anno 1404 which meant that I could not use the Anno 2070 subreddit due to it being off topic at the time. Now the subreddit is one of the main Anno subreddits which gamespecific ones always popping up with each new release. Hopefully Anno 1800 will continue to grow the Anno community and with the help all the other Anno communities and BlueByte we can grow both the game series and community in a positive way!

And don’t forget: We happily give your community project or creations a spot in the limelight. We created an own topic in the Ubisoft forum to make it easier to reach out to us and will see if we can add a fan section on the Union in future: Moving Pictures: we are looking for your creative content!

Let’s move on to our QnA session

ecofuture:
I would love it as a gamer if we could enjoy your work up close and personal- not just zooming in, but moving at eye level through my city to see my inhabitants.

Basti: Experiencing the vivid world of Anno in first person surely sounds exciting but implementing such a feature is not as easy as it sounds. The game is simply not optimized for a first person camera mode. As an example, buildings are created with the specific isometric Anno view in mind, from the shape to the displayed angle. Implementing a first person cam would mean we would have to spent a lot of work creating the camera system itself, its movement, improving buildings and structures so they look good from a FPS angle to optimizing various assets. Creating all assets that would look great in a first person camera would also mean that we would likely have to go with smaller maps, and higher system requirements. And to be frank here, spending so many development resources for a feature that wouldn’t add real value to the game would be better spent working on more important features.

Brosicore:
I hope that Anno 1800’s buildings will have the same attention to detail so players are tempted to spend some time just looking at them.

Basti: There is a lot of work put into the game to ensure that you are immersed in the lively world of Anno. How many bits and pieces we create might be worth to highlighting in a future DevBlog. The Union can let us know if you are interested that 😉 In the meanwhile, this short clip should speak for itself:

(Clip is from a work-in-progress pre-alpha version)

Arkenophas (From the DevBlog: Concept Art):
Wich software do ou use for this render ? Photoshop ? In the little animation, there is a 3D mock-up you talked about, no ? Is it not to hard to imagine a building only with photos ? I mean, I suppose we can’t see everything of a building with photos, so, do you need to imagine the unseen part, as you have less than three bricks on a photo ^^ ? And yes, I forgot something ^^ How do you begin your work ?

André: The first sketches are done completely in Photoshop. 3d mock-ups are done in 3ds Max and sometimes edited with in-house tool. Overpainting the mockup is then again done in PS sometimes using photo textures.
Working with old references can be challenging at times, especially as some of these older illustrations can be hard to read. Sometimes we just pick ideas from several different sources (e.g. the materials from picture 1, the roof structure from pic 2 etc.). I did a lot of experimentation with different drawing techniques to find a way to efficiently draw detailed-looking buildings. During this process, you also nurture a keener eye for the era you are working on. If I see a brick stone factory these days, I will automatically take a closer look. In addition, there are of course films and tv series from the era that help you build up a mental library of ideas and references.

In the end, the most important aspect is what people associate with the 19th century, like big smoke stacks or bricked buildings. We have to consider these expectations to successfully transport players to this era.

droggelcreeper:
I love the idea of using the exhibitions as an active gameplay elements, and that you can earn items through it (so will you just select one of them that you get to keep?). Do you think it may be possible to add further exhibitions later on, for example through DLC?

Natacha: With the world fair, you can choose the event you want to prepare, but one event at a time! Once the event has ended, you can make another choice. First and foremost, our focus is on the release version, but since events are subject to an unlock during the late game, adding content should be simple for this feature.

Mattrelia:
I’m very happy that there will finally be a possibility of interaction with the public buildings!! Nice. I hope this will be for every building and not only zoo and fair.

Natacha: We also believe that placing a building should not be an end in itself, and that providing interactivity with buildings adds a lot of strategic gameplay. Yet, buildings have different functions, and we will implement this interactivity where it can truly add value. Who knows, maybe the items could play a role here as well? J

denksteichich (from the forums):
Will there be natural catastrophes like earthquakes or erupting volcanoes? Will there be environmental pollution through the factories?

Basti: Natural disasters won’t be in the release version of the game. However, factories will be something you have to look out for, as they are a possible fire hazard for your metropolis. While we don’t want that pollution has a big impact on the game, as it was even a main theme in 2070, you might imagine that your citizen might not be that font of the idea to have a big industrial factory district in front of their courtyard.

Fireseed (from the forums):
Will there be a companion app again?

Basti: We are fully focused on delivering a great PC game with Anno 1800, so there are no plans for a companion app.

nico_Darmstadt:
Will there be churches or religion in Anno 1800? I couldn’t see any church towers in the trailer, but in the older Annos religion was always a need you had to fulfill, and the churches helped to create prettier cities.