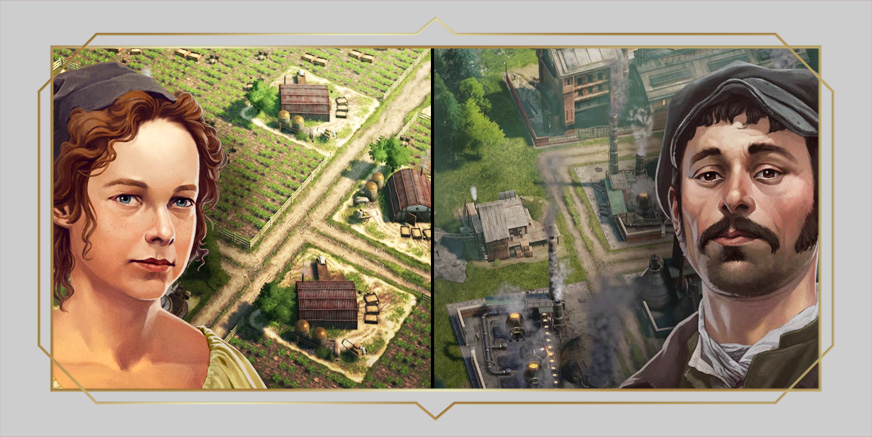 This week in the Anno Union, we return to the life of your factory workers and explain how your power over their working conditions can not only impact the productivity of your economy, but also the happiness of your residents. More residential tier DevBlog’s are on the way in the future, accompanied by more details about Anno 1800’s feature set as it opens up during your gameplay progress.

The first Anno Union focus-test has concluded
Over the course of the last two weeks, we gave a dozen Union Members the chance to test the development version of Anno 1800. The dedication and effort all of our Union testers put into their reports and detailed observations was astounding, providing dozens of pages with valuable data for our team.
But it’s not only about additional learnings for the game’s improvements; knowing when a feature works as intended and if the gameplay flow feels rewarding and satisfying is easily as important to us as new ideas. In theory, you can develop a game for decades, continuously improving and adding features and as a result, never getting the product ready for the release. For that reason, positive feedback helps us to know if we are on the right track with the game and its existing list of features.

So what is next? The first thing we need to do is to create an aggregated report, combining all the feedback from the playtest, which then needs to get discussed to identify action points to further improve or develop.
The success of the first test demonstrated that the combination of feedback collected via the Union, events and playtests creates an effective synergy of data to work with.
As it was only the beginning, we will continue to leverage the knowledge from our community with future Anno Union focus tests. As always, we will keep you in the loop and updated as soon as we are about to open the second focus test group.

Anno Cast 03 this week Thursday, March 22nd, 4.30pm CET
Anno Cast 03 goes live this week, break a leg! This Thursday, we will discuss some current and past development of the game, how the Union feedback helps us in all stages of development and of course, show you Anno 1800 in action again. As with previous episodes, we will also answer some questions, some of them previously gathered in the comments (so keep asking) and others during the actual show.

As always, we will publish a blog this Thursday to watch the stream live on the Anno Union.