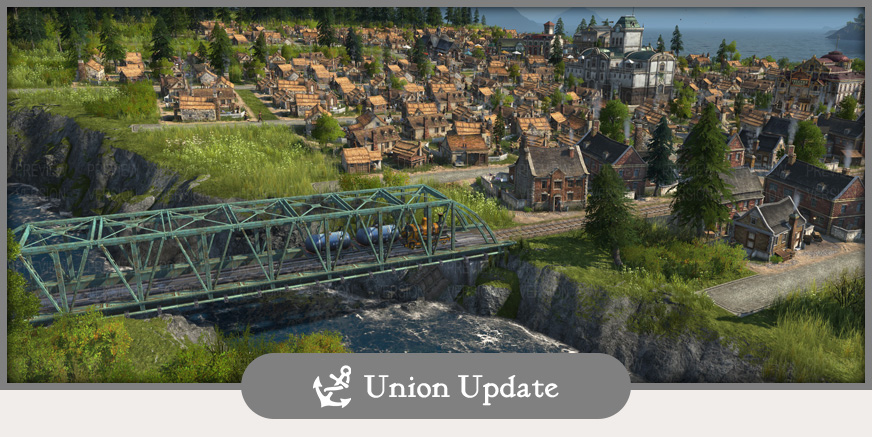 Union Update: Something big is coming

We are knee-deep in the de… the final development phase of Anno 1800, and while the big event season with the likes of gamescom and EGX lies behind us, there is still plenty happening in the Anno Union world. Another Union focus test round just concluded and we are working to finalize our content roadmap for those all-important last few months prior to the release of the game. Due to that workload, it can happen that some content might suffer a slight delay, as some of you might have already noticed, but we are working hard to ensure you are well entertained leading up to the big launch date.

To give you a glimpse at our upcoming content: We plan to host Livestreams more frequently, will provide fan material such as wallpapers, highlight your community projects and will tackle important outstanding topics such as naval combat or multiplayer in detail. And not to forget, we will also open the floodgates of our focus playtesting to allow more Union members than ever before to test the game.

While we are on the playtest subject: we need to talk!
The players of the latest focus test provided us once again with a large amount of incredibly helpful feedback and we are still going through the extensive test reports. But we are confident to say that the latest results show that Anno 1800 is on the right track to deliver a game Anno fans can get excited about, even though there is still a lot of work to do prior to the release in February.

In order to make sure that we get as much feedback and data as possible, we want to invite a significantly higher amount of Union members for the next phase of the focus test. This huge test will happen as early as this year and will be exclusive to members of the Anno Union. So if you are just a reader on our page, make sure that you register on the Anno Union page with your Uplay account as soon as possible to secure your chance at being invited.

And to give you some visual impressions from the latest test, here are a few screenshots from our testers (we won’t publish the names as the test is still covered by an NDA).

Keyword feedback: We have not missed your comments regarding the Ship Design Contest in last weeks Union Update. Because of that feedback, we will make sure that for future votes, we give you a chance to vote on a final selection on entries to determine the winner. When talking about the skill regarding the execution of these submissions, the idea behind an entry is as important for us as the actual craftsmanship of the community member, be it a drawing, writing or any other submission (even though we are often amazed by the true display of skills in some of your work).
When we are talking about content that is supposed to be added to the game, keep in mind that we also have to check if an idea is feasible within our production pipeline.

Notwithstanding the above, we want to honor exceptional creative takes and creations with a proper showcase on our Anno Union channels.

And with that, we are already at the end of today’s Union Update. Don’t forget to share your thoughts, suggestions and feedback in the comments below. Moreover, we are always eager to get your ideas for the Anno Union and the Union Updates.