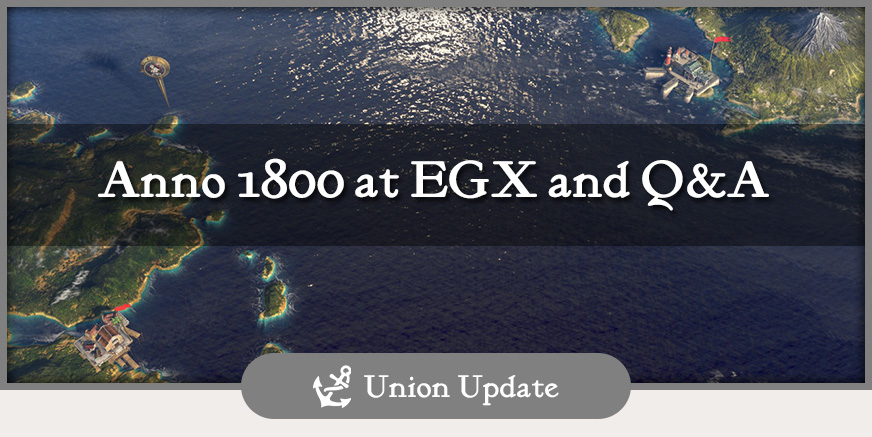 A new week has arrived and that, of course, means that a new Union Update chock full with Anno wisdom is here. Before we start the promised elaborate Q&A Session, let us first make you aware of two possibilities to see Anno 1800- live and in glorious color! Also, as a heads-up, in this week’s DevBlog we will dive into the world of Expeditions.

We’re at the EGXs – Plural!

As announced, this Thursday on the 20th at 1PM BST / 8AM EDT, we’ll be streaming a panel with Anno 1800 from EGX in Birmingham which you can view live at https://www.twitch.tv/egx

But wait, there’s more: We’re also happy to stop by the first EGX in Berlin! Our presentation where will be on Sunday, the 29th of September and it’ll be live at 5PM on Twitch, so mark your calendars – or even better: Visit us!

Enough with the prelude – you have questions and we’ll try to give you answers!

Sir_Obelexxus
There were a few Anno T-Shirts at gamescom. As I didn’t have an opportunity to get one, I’m asking myself if it’ll be possible to get merch at some point, especially T-shirts?
Answer: The number of our gamescom shirts was very limited and the demand was huge, so we don’t have any shirts left. We’ll keep the interest for the shirts in mind for the future, however.

Grieswurst
Will there be visible ship crews?
Answer: We often hear the request for crews being visible at work on their ships, due to our love for detail and visual feedback in the cities, similar to how you are able to see your citizens doing their daily work. While visual feedback taking the form of crewmembers is technically possible, the implementation would be very time-intensive and require us to overcome a few technical hurdles.
One of the reasons for this is the size ratio. As you might be aware, the citizens of our Anno world need to have a good mix between visibility and realism, so there won’t be realistic size ratios all the time. And while the ships in Anno 1800 are bigger than ever, the ratios are not necessarily the same ones as with buildings and streets.
In short: The characters on the ships would have a different size as the ones in the city, as they would otherwise look out of place – especially when your ship lies in the harbor.
But there are other points, which made us decide against the visible crew. We wanted a big list of varied ships and ship types and having the crew would’ve possibly been at the expensive of ship variety. Visual feedback of the units you move around in fleets can also be taxing on the eye and make the game seem visually restless, even chaotic. And the further visual feedback that needs to be calculated would also be a strain on performance – and these are just a few points, that we have to take into account when thinking about these decisions.
As you can see, in production we always have to evaluate if the benefits of a feature outweigh the disadvantage or justify the expected effort at the expense of other content (which we could work on instead).

BlueCommander_
Is it now not possible anymore to play a game without switching sectors?
Answer: We played around with various ideas and feedback from the Union focus groups. Many goods that you can import from the New World to your original session are luxury goods for higher resident tiers. With the implementation of separate residential and luxury needs, this means that the rise of your citizens is not dependent on luxury goods, and opting not to use the second session will only partially slow you down. However, the New World will also be the main source of oil, so if you plan to supply your metropolis with electricity at a large scale, we recommend securing an independent influx of the fossil fuel. Trading with AI players, neutral factions and other players in multiplayer are other means with which to get your hands on imported goods. on higher difficulty levels, where other characters will be more aggressive and directly engage with you for economic and even military dominance, a beachhead in the new world can be more meaningful than in a relaxed game on a lower difficulty setting. With that said, we are already very curious to see videos of players, who will push through the highest difficulty without traveling to the New World at all. J

Mr.Beko80
How is it looking with moving buildings around, can you move them anytime or just for a short time after building them?
Will this option have any impact on the difficulty, like the reimbursement of building material in 1404?
Answer: There will be no limits as to when you can move a building. And while the moving of a building is going to be free on lower difficulties, on the higher difficulty settings there will be a cost in building materials.

BfVorsteher
I’m happy that aside from the Darwin Temple, we will also get an altar for the achievements of the „two-legged burrowing mouse“ to expand the cultural diversity of our city. The only question, will space be enough for that? Or will there be revolts due to lack of living space and resulting higher rent?
Answer: Juggling available building space with the needs of your city is one of the core challenges of Anno and of course this won’t change with Anno 1800. Depending on difficulty (which can also influence the size of islands), it can be a challenge to get all the necessary buildings on one island. Ambition plays a role here too, such as deciding whether you want to just have a small “alibi zoo” or push the module system to its limits. In the latter case, you can build museums and zoos that could cover  smaller island all by themselves- provided of course that you manage to find enough attractions to fill them with. We leave the worries about ever rising renting costs to the grey reality, however.

roka71
Will there be an Open Beta before release or a Closed Beta for pre-orders?
Answer: We can’t share any concrete details yet, but we plan to have bigger testing phases with a lot more players prior to launch. However, these will be independent of your pre-order status. If we had to speculate, we would recommend all Anno Fans who wish to play the game before launch to register right here on the Anno Union…

pritam87
Is day night cycle present in the time of release?
Answer: We know that the day/night-Cycle is a beloved feature that also has a lot of fans here on the team. However, we won’t have a day/ night cycle in the game at launch.

SirKju
What really bugs me is the hustle and bustle in the trailer. The graphics are breathtaking, but more people on the street would be nice! Is there going to be a change there?
Answer: Our work around „Visual Feedback“ is not yet done, so don’t consider anything you have seen final. Additionally, when we create a trailer (which have so far all showed actual game graphics), we often have to change the settings of the feedback units, so it can sometimes happen that the trailers show fewer units than you would see during gameplay.

Cilitbangbang
The question that burns inside of me is if we (the Union) will be involved with future DLC? Those could be planned already with some feedback.
Answer: That is the case already! As we are only now starting to throw around ideas and plans for more content for the time beyond the launch for Anno 1800, we will definitely keep close tabs on Union and community feedback – as was the case with our recently announced Anarchist DLC. Here, the fan feedback in combination with the character’s gameplay potential made it an easy choice to include in the game down the road. We want to stress however that it will not be a “Day 1 DLC” – work on the Anarchist will start once the main game is done and we plan to launch it a few months after launch in spring 2019.

chris02918
How can I react quickly if something happens in the world, where I’m not looking at at the moment? An attack? Are resources missing in a settlement?
Answer: With two sessions with one or more settled islands each, it is indeed sometimes possible to somewhat lose track – especially if you also want to keep an eye on various ships and running expeditions. That’s why we put a lot of effort into our notification system which will keep you up to date on important or critical information and developments. With one click, you’ll immediately hop to the place that’s in need of your attention.

Chris9990306
I think that you should reconsider the settling of the new world. I don’t think that having the AI wait for the player to settle before they move in is the right way.
Answer: Our train of thought here was that we didn’t want to pressure players or give you the feeling that you have to explore the New World as soon as possible if you don’t want to lag behind the AI. However, after seeing the largely unanimous feedback on this matter we sat down again to discuss it, and have decided to change this slightly. Whether the AI characters will wait for the player before exploring the New World is now based on the difficulty level.