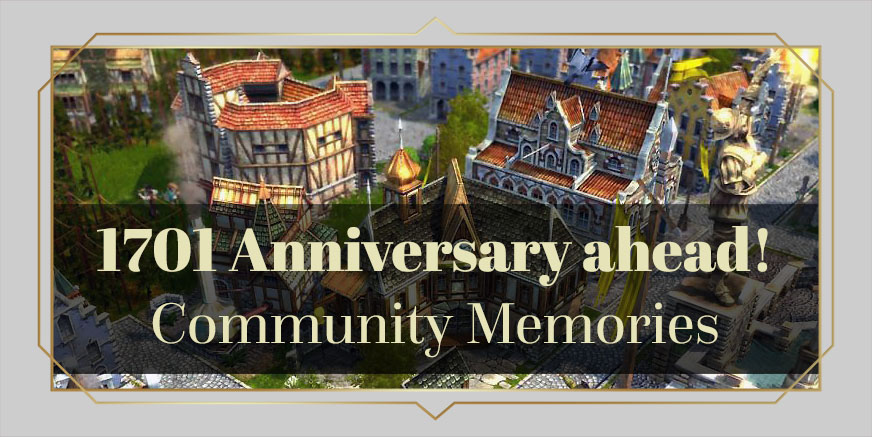 The Anno series first bustled onto gamer’s screens nearly two decades ago, and next week marks the anniversary for one of the biggest milestones in the history of the Anno series.

The release of Anno 1701 in the year 2006 was a big step for the series, an evolution from the first two 2D isometric titles into the third dimension of gaming. It is also a very special game for us here at Ubisoft Blue Byte Mainz, as it was the first time that we (under our original name Related Designs) got our hands on the steering wheel of this storied franchise.

Many of those developers are still a part of the team today and they incorporate their experiences into the development of the upcoming Anno 1800. We love to reminisce in memories about the development of the older games and what they have contributed to the series as a whole.
And with these trips down memory lane, we remembered that many of you guys where already a part of our community  back then while newer fans might have also interesting experiences when going back to try out one of the older Anno games.

And here comes the call to action:
Share your Anno 1701 memories, anecdotes or creations such as videos, screenshots or fan art!

What was the first things you did or remembered when starting to play Anno 1701? How about some funny or beloved memories you connect with the first Anno in 3D and why is Anno 1701 still an important game for you as a fan of the series?
We hope that you have plenty of comments or creations to share with the union. You can also post videos, screenshots, stories and other fan art in our Ubisoft fan creation topic:  http://forums.ubi.com/showthread.php/1760804-Moving-Pictures-We-are-looking-for-Fanvideos-and-streams!

The best entries will get their own spotlight during next week’s Anno 1701 anniversary celebrations. We are curious and excited and wish you all a great weekend!