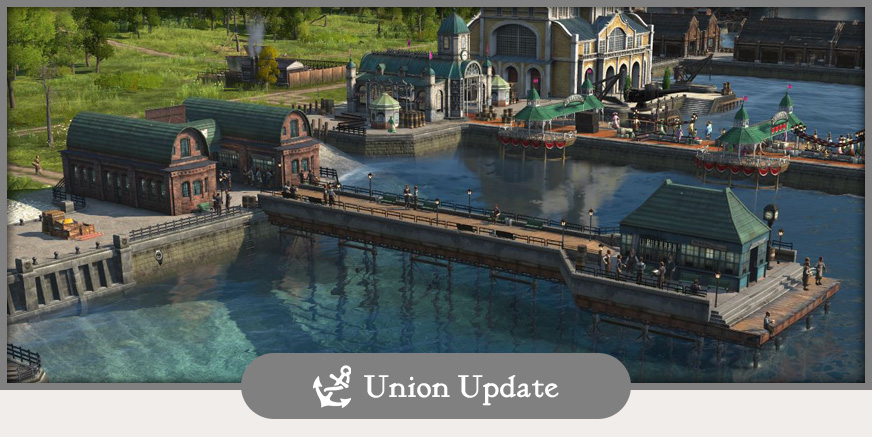 While some of us enjoy the snowy surprise and the resulting winter themed skin applied in many parts of Germany, we bring you another round of our Community questions and answers and streams for the cozy winter days.

With this week’s DevBlog: Ornaments, our blog series revolving the development of Anno 1800 returns from its winter hiatus. Next week, we will conquer the winter season with some heat: we hope that you look forward to city incidents such as firestorms, strikes and the season appropriate illness before we raise the curtain for the big feature reveal before our Closed Beta at the end of the month.

The next episode of our AnnoCast and Anno Afternoon
Save the date as our Twitch devstream will return next week Wednesday January 23rd. This time with Narrative Designer Marie who will demonstrate us how we applied some fresh paint to the quest system in Anno 1800. Nevertheless, that is not all as next week Friday, January 25th, Chris and John will be back with their aspiring Anno 2070 utopia.

Watch it live on twitch.tv/ubisoftbluebyte – and follow our channel if you never want to miss a show!

iyamaShiro
Will it be possible to change specific sound slider, such as voice, music and effects? I love to tune up the effects and dial down the rest of the game audio.
Answer: You will be able to change the following audio levels individually: Master Volume, Menu Sounds, Voice Volume, Music Volume and SFX Volume. Enjoy!

Ceib0
Will we only be able to exhibit artefacts in the museum or also art pieces such as statues or paintings?
Answer:Exhibits will mainly include cultural artefacts and sets will include statues. Bigger exhibits are displayed in open-air modules and come with their own unique asset while smaller artifacts will be showcased in museum wing modules. By the way: You will be able to place ornaments between your zoo and museum modules freely, which will allow you to create beautiful vistas with statues, fountains or other ornamental structures.

adriankowaty
Will there be a statistic overview like in 2205 which allows us to see how many units of a certain good we produce at a time?
Answer: We won’t have a statistic feature such as the one in Anno 2070 at launch of the game. But we are aware that many of you wish to see a comprehensive overview and statistics of your production, especially when reaching the end-game. We will keep continue to keep an eye on such feedback after the launch of the game.
The tooltip of each production building allows you to see how long it takes to finish one good and you will be further able to change the production speed with things like the working condition slider. If you compare the time it takes to create a good compared to the production time of the production of the needed resources, you can easily calculated the most effective rate of production and resource buildings.
Furthermore, you can check the overall amount of goods and if their stock is currently rising or declining in the kontor and warehouses.

g4mer901
Will it be possible to build sole production islands or will I need to create a new settlement with each island expansion?
Answer: Reaching the fourth residential tier unlocks a new building: the commuter harbor. This new building allows you to connect different islands, which also have a commuter harbor and once linked; islands will share their workforce as one global pool. This means that you will not need to create settlements to support your production islands. But beware: an economy which mainly relies on a commuter network is an easy target during war, as one well-directed blow to your commuter harbors can cripple your whole production pipeline.

prgbrowne
I have read reviews on Anno 1800 where one of the downsides is the small size of land masses to build your empire. Is that a valid concern? It probably would be nice to have the choice of the size of the land mass you get to colonise, much like Civilization I guess. I don’t really want to see small islands close together. Varied terrain type options would also be good.
Answer: Anno 1800 will not only have the biggest maps in the history of the series, but also islands with vastest construction space. In the custom game options, you will be able to change the type of island world (which affects the arrangement of islands, such as atolls and archipelagos) and how frequents large islands are on your map. As naval exploration was always an essential game pillar of the Anno series, we further expanded on the ocean space to give you more room for trading networks or open water battlefields for tense ship fights on the high sea.

denNes_
Is a return of the research planned for the game? I loved it in 2070 and 1701 and would like if it celebrates a comeback to the series.
Answer: We currently have no planes for a self-contained research feature in Anno 1800. We followed many community discussions revolving research closely and want to provide a few insides how Anno 1800 will cover that topic. In previous Anno titles, research served as an item generator and further allowed you to customize your playstyle with various perks and special abilities. Anno 1800 covers said options with several new features and as player freedom is important for us, we decided against a classic and often restricting “RTS” style research tree.
There are many different ways how to acquire items. In addition to quests or trading, you will be able to generate items with the new city attractiveness, the variety of expeditions or the world fair monument.
When on a zoological expedition, you will not only be able to acquire animals for your zoo, you can also get your hands on some cultural items or even hire specialists during events, which come with abilities which might not be related to the zoo at all. As an example, a specialist might join you who is able to boost one of your battleships with a special ability. If you want to focus on your fleet of warships, you can run naval themed exhibitions in your world fair or do bounty-hunt expeditions, which will reward you with naval related items such as weaponry or combat savvy specialists.
If you prefer to use the power of science to benefit your society, get marvelous new machines from the world fair, which you can slot in your guild houses to boost your factories with various effects.
Furthermore, you can make use of the influence system to get bonuses which suit your custom playstyle which are, in contrast to a research tree, are reversible at any time.
Add more elements such as electricity; Anno 1800 adds various layers, which allow you to optimize or to get experimental with your own unique playstyle.