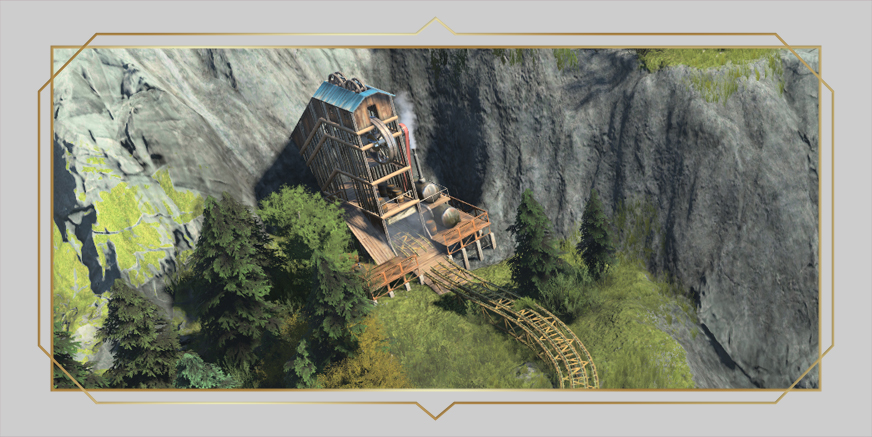 After a fairly short week for us, we are back and ready to engage the month of November with new content. A big thanks for all the feedback regarding the anniversary week. As you seem to like the anniversary idea, we decided to do some similar content for the upcoming Anno 2070 birthday. Furthermore, the streams are well received and we will see how we can further improve based on your feedback  to bring you more episodes of the AnnoCast and the Anniversary Let’s Plays, as well as showing you Anno 1800 live and in action as soon as technically possible. But the streaming means also means a lot of additional work for us and for that reason, we won’t be able to bring you requested weekly shows or even expand the streams to two or even three hours. We think that the Union understands – and agrees! – that the development of Anno 1800 is our top priority. We also have to report that Norbert filed a complaint, as he was so far not given the screen time fans asked for. We surely don’t want to get in trouble with our HR department, so we are looking at ways to include him in the future.

Regarding development, we are currently working on our next big development milestone and will share an update about the state of the game with you soon. As previously announced we will give you some interesting details about military this month as well as spotlight the work of a 3D artist. Also, please welcome our Senior Game Designer and stream operator Christian, as he will help me out with today’s Community QnA.

But before we start with todays QnA, here comes the call to action for the Anno Union: Share your Anno 2070 memories, crazy stories or anecdotes for the upcoming Community blog in the Anno 2070 anniversary week!

NK3D
I am happy about the fact that you are planning to have a player testing capable version of the game ready by this year, does that mean we can expect a small stream?

Basti: We currently discussing requirements for our development build in order to show you Anno 1800 gameplay sections during a Developer Stream. While we still want to improve our general stream setup, we know now that it works. We cannot give you an ETA right now but we want to show you Anno 1800 in action as soon as technically possible. I can tell that we will start displaying certain elements of the game including developer talks rather than a let’s play format.

Sir_Obelexxus
One question regarding the selection process for testers. It is clear that not everyone will be able to make it into the first play test. Would it make more sense to create a small application process, where you can ask important questions such as “which way you want to travel to the location? The city of Mainz is over 400km away from some places in Germany, which is a bit much to just “show up” to test Anno 1800. Is there anything like that coming or planned?

Basti: We plan various Anno Union playtests until the release of Anno 1800. We will invite a small focus group for the first test, where the participants will visit us in our studio in Mainz. More tests will happen in larger groups in our studios, at different place or playable from your own home PC. The best-case scenario for us are these latter tests, in which you will be able to participate from the comfort of your home. This allows us to invite a larger numbers of players from all players, and to have the game tested on a wider range of possible hardware configurations, depending on our needs for the specific test. The idea of an application process is interesting and we will see in which form it could make sense for us for future tests.

Julius_A.
How will it work when citizens die in my settlement? Will there be a graveyard or something similar in the game?

Basti: While we will have a church as a basic need, dying citizen won’t be a gameplay element in Anno 1800. Citizens might leave your settlement because of missing fulfillments of basic needs or other elements but adding that layer would overcomplicate things more than actually benefit the Anno game design.

Montanus77
As with the voting with the AI character, it is quite hard to vote for something if you are missing the greater picture or don’t know how it will affect a feature in a larger scale. I would like to ask you to provide more insights about the content of future voting’s and also tell us, what kind of decisions were set in stone about that content before starting the community vote.

Basti: Good Feedback, we will see how we can keep that in mind with future votes in order to provide a little bit more background information about the underlying systems of voted content. While AI characters are a long established feature in the Anno series, the world fair blogs showed us that it was not clear for every Anno Union member, how the event feature actually works in detail. We however also have to consider development timelines, where many things are being work on in parallel; by the time one element may be fully set in stone, it could already be too late to have the community vote on related elements.

Depace
Personally, I would have liked it more to have a bigger production line from the get go, as complexity in the game is a really important part for me. Also, the fishing hut was always the first to go building to kick off the food production, a change to that would have been a great chance to mix things up a bit without having too much of an impact on the games feeling.

Basti: During the concept and development phase, we take a closer look at all game elements to evaluate if it makes sense to perform certain changes to the Anno formula or if that could even damage the overall feeling and balancing of the game. Decisions often being made based on experience and sometimes a certain feeling what could work but with Anno 1800, we want to take advantage of the Anno Union initiative to directly work with your feedback as an additional layer, from allegedly small features like the first tier of the food production chain to crucial larger scale content. Based on that feedback, we made the decision that, with the traditional start in the food supply chain, newer players will have an easier start, veterans a familiar environment while it will not y have a negative impact on the overall complexity of the game.

Lord1anni
I think it would be really cool if the transported goods (in this case on horse-carts) would not just vanish from the roads and instead drive to the actual production building. I would not mind if the crates would just appear just like that on the cart.

Christian: With the current implementation state of the feature, we want that the market carts are visible while unloading their goods. But as the visual representation of the logistic system is not fully implemented yet, a lot of that might be subject to change until we reach Beta state. As you might have heard already, we are currently experimenting with goods being actually moved from one production building to another instead of just being picked up at a warehouse. The main reason is that we want to show how busy the warehouse can get in the game world. If you see that there are too many market carts causing a small traffic jam in front of the warehouse, it might be a good moment to think about building an additional one or upgrading the existing warehouse.

Are you guys interested in getting more details about the logistic system or do you want to rather explore it your own when the game comes out? Let us know in the comments below!

HippoKillar184
I would be interested what kind of goods will be in the game, my favorites are the more complex production chains like wine or candle sticks from 1404.

Christian: The production chains will be a mix between familiar and completely new goods. That means you will see some traditional chains such as bread or fish, while the industrial revolution allows us to implement new ones like steel production. While progressing in the game, goods will become more advanced and as a result, production chains longer, more complex and difficult to handle. We will dive into that topic into greater detail in a future DevBlog.

Swimming-Paul
Do you think you could make an update in the future about ornamentals? Or isn´t that considered important enough?

Basti: Whether it is beauty building, trading and economy or military domination, players have always had their preference for their favorite game approach. Beauty building is a very important aspect of the game and for that reason, we will provide more development insights about ornaments and other beauty building aspects in future. It would be interesting for us to know what beauty builders are hoping for in the game.

Annosofeles FORUM
How will mining resources look in the game? Will it be more like 2070 or 2205, where you have general spots for where you can decide which resource you mine or more like 1404, where each resources has a designated spot for reach resource type. How about the quantity of resources in each node? More like 1404 (limited but you can refill them with money) or like 2205 (unlimited) or even like 2070 (limited and only refillable with items)?

Basti: Mining resources have set spots, which are generated with the isles when you start a new game. The various resources have their designated spots, which means you have to construct your coalmine on a coal node. The amount of coal or any other mining resource will not be limited and as a result, cannot deplete. When we show you more about the production chains in future, we will also tell more about the mineral extraction.