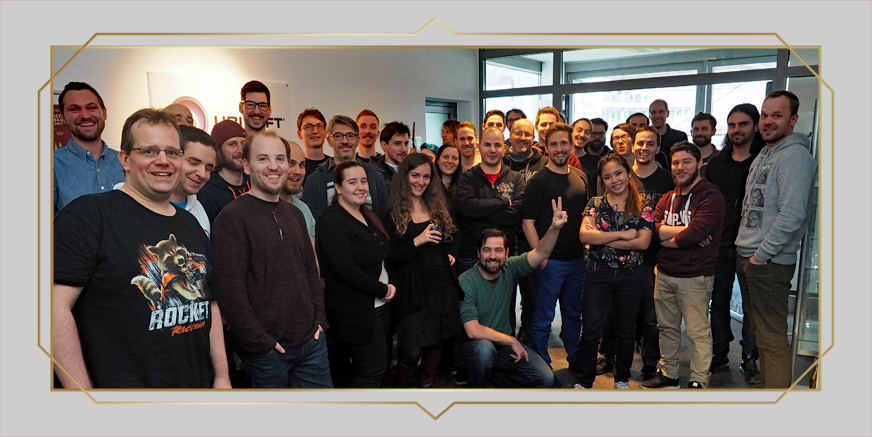 Looking back on our journey, the last four month were an incredibly exciting and sometimes tense journey. The Anno Union started with a vision and like the great explorers of old, we always believed in our idea but nobody could foresee where the journey would lead us along the way.
The Anno Union is still sailing strong and we are confident that our fleet is on the right track, thanks to all the amazing support from our Anno fans.
We want to close the first chapter of the Anno union and the year 2017 with a short recap of everything that has happened so far. This was just the beginning, and we hope that you are as excited for 2018 as we are!  We will be back with new content for you all in January, and however you spend the festive season, we hope you will have a great time!

The great Gamescom Announcement
How would it turn out? We were confident that our fans would enjoy the 19th century setting of our new game, but the Anno Union was still a big experiment for us. And yes, I can tell you that seeing the positive reactions to the surprise announcements of Anno 1800 and the Union were quite the rush for all of us. However, it was only the opening salvo, and over the following weeks and months, we worked with you all to shape the Anno union into what it is today.

The spirit of the Union
To start things off, we had a lot of ground work to cover. Game development is a complex science, and even game ideas that are great on their own ill not necessarily result in a great game when combines with hundreds of others. Reacting to your questions, feedback and even skepticism was our answer and helped us to improve the program. It is an ongoing journey, where we listen and improve, while you react and inspire. As we are getting closer to our release, let us all push the Union forward together to become a great community hub even beyond the launch of Anno 1800.

DevBlogs – a look behind the curtain
Having exclusive looks behind the scenes is surely exciting but that was not our only intent. Game development is a complex task and an Anno title is a collaborative effort of a big development team. We have seen countless great ideas from our community but adding all of them to a game would end up in a development process, which would probably never end. So we decided to give you insights, explain how we set up our development roadmap, how we evaluate your feedback and even gave you a detailed look on the production processes.
From concept art to logistics, we will continue to give you more artistic and informative insights into Anno 1800 and its features. Of course, this important foundation will also give you the needed knowledge to impact development and it enables us to ask you, true Anno experts and veterans, for very specific feedback on certain game elements.

Alpha Cake! We got to treat ourselves sometimes, right?

Votes, Feedback and Improvements
With the Anno Union, we promised to give you exclusive insights in the development process while your feedback should help us to shape the game during development.
Not surprisingly, you definitely knew how to deliver on your end. In the first week alone, we received countless comments and feedback on our game direction and the Union. But how would your feedback actually improve the game?
With our first Vote, we had you decide about the last AI character in the game, while additional development votes would be our weapon of choice to let you have the final word on specific aspects of the game. As such, the first Union vote was only the kick-off, as we soon after decided to let you have more creative impact with the voting for the world fair event.
So Mr. Gasparov was first and it is safe to say that the visionary architect appreciates that you decided that the Urbanism Exhibition will be the fourth event for our world fair monument!

In the future, we want to mix things up further, ranging from votes where you help us decide on certain content to having an impact and influence on future votings.
With our blogs, you gave us constant quality feedback in our comments and started further discussions in our forums. Since then, that feedback has fueled our development meetings, from the production team discussing your ideas up to Union sentiment becoming constant topic in our big milestone and other team meetings.
While the Union greatly benefited the game from the get go, we will utilize that power in our communities even further with upcoming playtests and future improvements to the Union program.

The first stream
The idea for a stream was born in the early days of the Union but building the streaming room, working on a concept and finding ideas how we can talk about the development and show you the game was not always an easy task. There is one thing I have learned over the years: no matter how many times you setup a streaming room and prepare a show, something can and probably will go wrong.
But break a leg, the first AnnoCast was a well-received success and we knew that there is potential to talk about the state of the development and to show you the progress we made. This year was a test-run and with the latest reveal of gameplay, we look forward to upcoming episodes and further production updates. Besides the AnnoCast, we will also continue to celebrate anniversaries of a game series, which will already turn 20 in the upcoming year. There might be the one or another idea for a special episode?

Did you miss our big gameplay reveal stream? We got you covered!

Alpha and Union Playtest
Showing the state of the game is one thing but to let you actually play the game allows us to get pinpoint feedback on the game experience. And as we just achieved Alpha status with the game, we are ready to use that feedback to its full potential. Over the course of the next year, we will continue to utilize community feedback via the Union, forum, votes or surveys but the Alpha is also the time when feedback from Union playtests matter. So keep an eye on the Union for future updates about upcoming playtests and other events.

More to come…
The year 2017 already felt like a tour de force but things will get even more exciting next year, as every month will bring us closer to the long awaited launch. Beside continuous DevBlogs, streams and playtests, we want to improve existing formats and bring you new content to the Union. More support for fan projects, more ways for you to interact with us and to let your creative energy loose. The great entries to our story contest alone shows us that there is so much potential for great creations in the Union.

And in the spirit in the Union, where we all work together to create a true Anno game for the fans, what are your wishes and ideas for the Union in 2018? What was your favorite Union moment, what would you like to see us doing more or is there something we could improve or even which is currently missing? Share your thoughts about the start of our journey and things to come with us and we cannot wait to come back to you after the holiday season!