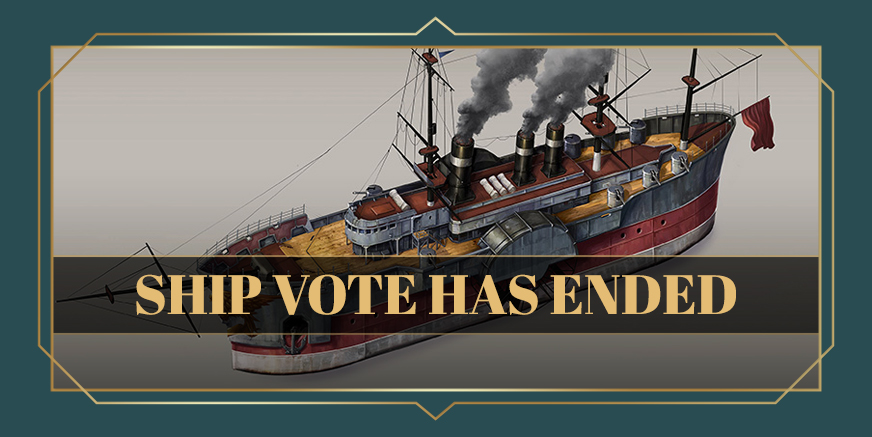 It was an incredibly close head-to-head race but at the end, the Imperial Pride managed to reach the finish line in a true photo finish just ahead of its closest competitor, the Iron Dragon. But beyond a highly entertaining race to watch, it was also very insightful for us to see how the comments and the actual votes being cast can vary. We knew from the start of the vote that the Imperial Pride would be a strong contender, but given some of the comments about the design, who could have guessed that the Iron Dragon would almost steal the race? On the other hand, the tourist ship did not manage to rally a large enough number of voters, despite being one of the team’s favorites. However, we were all delighted to see that the little tug boat that could was so popular with the Anno Union members.

For the Union members who had high hopes that their personal favorite would make the race, remember that you still will be able to acquire all of the ships via gameplay.

With the closing of the Union Ship vote, we all can look forward to the second stage: the Ship Design Contest, where the Union will be able to hand in their own design ideas for an alternate variant of the Imperial Pride. The exact details for the contest will be shared next week.

When it comes to Union content during the summer, we are not planning to lay back and enjoying the nice weather. Instead, we will bring you exciting DevBlog’s in the weeks to come, among them features highlighting how we encourage player freedom as well as gameplay complexity and customization. The first one will put our new Influence feature into the limelight, a great way to customize and support different gameplay approaches. Gameplay complexity is a theme we mentioned many times since reveal of Anno 1800, but Influence is only one of the many features the game has to offer.

But it is not all just deep systems and mechanics, we will soon tackle one of the most important technological achievements of the industrial age!

Do not forget: English Community Roundtable this evening 7pm CEST
The last weeks German Roundtable session was a blast and today, we are looking forward to have a chat with our international Union community. If you missed the previous roundtables, it is a friendly chat session where our community team and Anno Union members come together to discuss everything Anno 1800 and Anno Union related.
Join our Anno Union community roundtable in our Annoverse Fan Discord at 7pm CEST: https://discordapp.com/invite/V4xhZ8Z

Our communities are important for us: let us know if you run your own fan project or want to share some cool or even crazy ideas how we could highlight projects and content from our Anno communities out there. Just get in contact with us vie the comments, our Anno Ubisoft forum or just hit us on Twitter our official Twitter channel @Anno_EN

We are looking forward to this week’s DevBlog and if you have anything to add, feedback to share or just cool ideas for the Anno Union and our communities out there, let us know in the comments below!