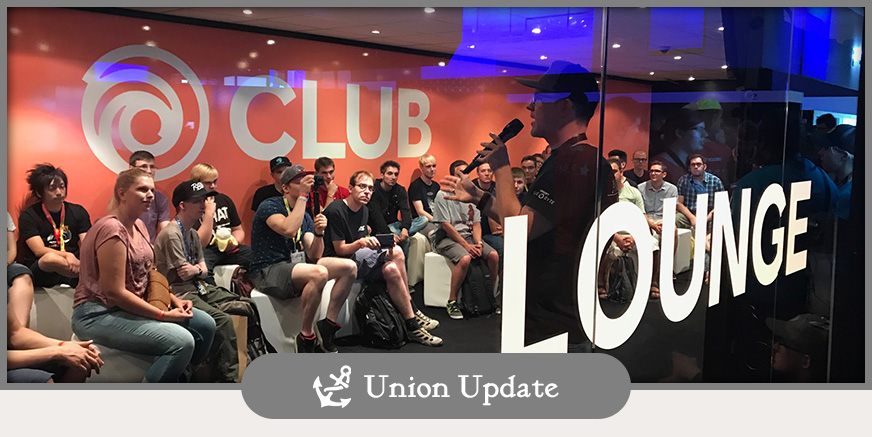 Another gamescom is in the history books – and what an amazing show it has been for Anno 1800 and the team here at Ubisoft Blue Byte! With so much going on, let us recap all the things you may have missed and give you peak on upcoming content!

Anno 1800 releases February 26th, 2019
Let’s start with the biggest news coming out of gamescom 2018: Anno 1800 will ship globally for Windows PC on February 26th, 2019! To properly celebrate this news, we also had a new trailer that gave you a first glimpse of a new world to explore.

Pre-Orders for all our editions are now live
With the release date out in the open, many of you have been asking how and when you could be buying Anno 1800. And the answer to that is… you can pre-order it now, in up to three different editions (based on your location).

No matter if you just want the base game itself, are looking for some digital goodies, or you want a proper physical art book on your shelf, we have you covered. Regardless of which editions you are going for, your pre-order from participating retailers will earn you the Imperial Pack, including a statuesque throwback to Anno 1602, and exclusive alternate models for your command ship and train. Find the full edition breakdown here: https://www.anno-union.com/en/anno-1800-release-date-and-pre-order/

We won some awards!
gamescom started in the best possible way for Anno 1800, with an expert jury awarding us the prestigious “Best PC Game” award. As you can see, we were rather excited! And to cap it all off, Saturday saw Ubisoft win the fan-voted award for the best developer of the show. Thank you so much for your support and votes, we couldn’t be happier with the reception of our game!

Anno 1800 is great – but do not just take our word for it!
A large number of previews (both written and of the video variety) from influencers and press from around the globe have been hitting the web. So if you want to learn more about what we showed behind closed doors at our pre-gamescom events as well as the show itself, here’s your chance! Press were able to play up to three hours of the game, including most content of the first three citizen tiers. And they also got their hands on some all-new features, which brings me to…

The Anno 1800 booth, UbiLounge masterclass and stage presentations
But probably more exciting than anything else during the convention was our big Anno 1800 booth, where fans could get their hands on the game for the first time and take their own special gamescom memento with a 19th century style photo. 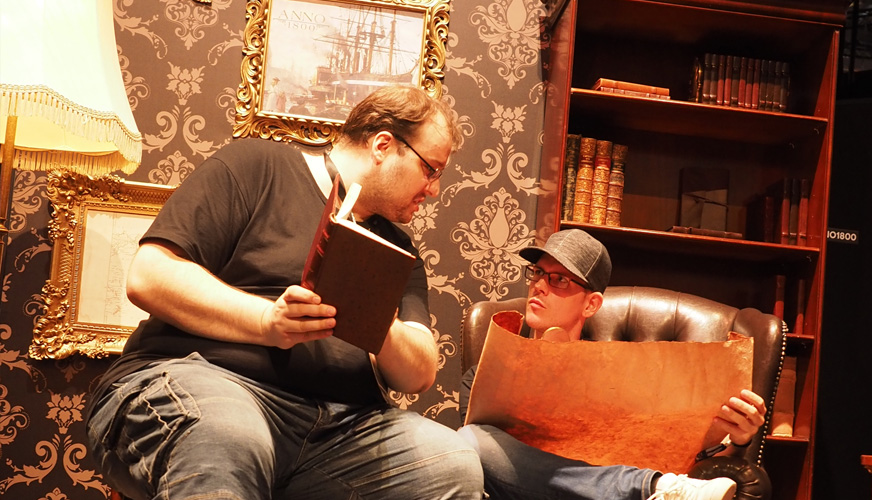 Chris aka Ubi O5igther from the community team was also at gc2018 and we found some time for a relaxing foto session. 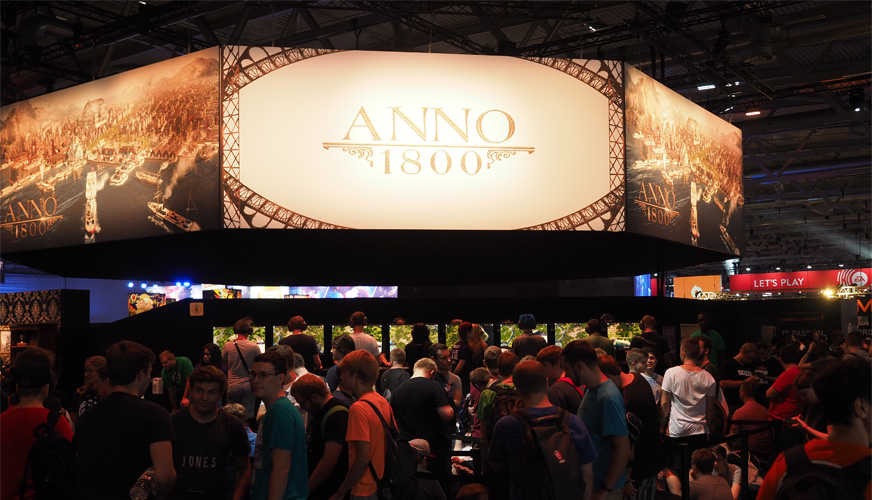 And the booth was packed – with queuing times starting immediately to ramp up as soon as the convention opened. Even with long waiting times, thousands were able to get their first impressions for the seventh Anno title in the series and we tried to get as much feedback as possible. If you visited us and played the game, feel free to share your take on the gamescom demo in the comments!

Playing the game was obviously a highlight but we had some more Anno cards up our sleeve.
On our big Ubisoft stage, we gave you a glimpse on our newly announced features such as the expeditions, the museum and blueprints. Hundreds of Anno fans gave us not only great company during the daily shows, even in that loud environment of a packed convention hall everyone could hear the “Anno Union” battlecry of the Anno fans (seriously I was surprised how loud you guys can get). 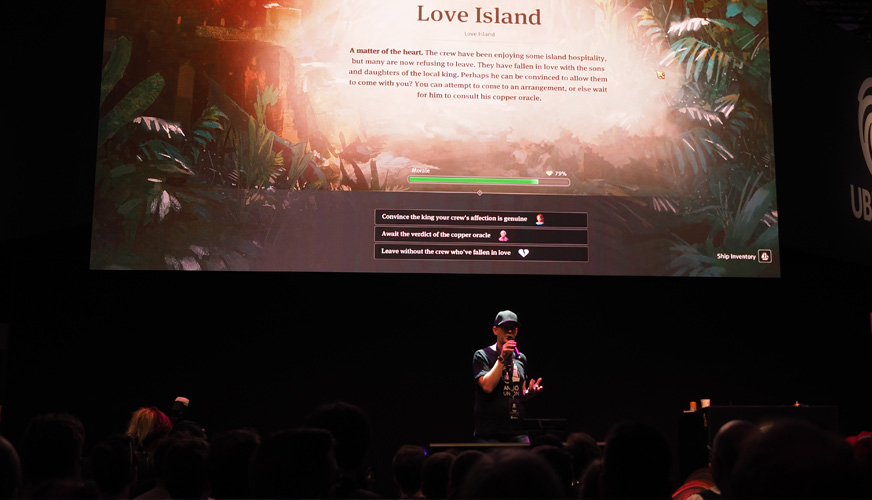 Love Island, our throwback to the story “mutiny on the bounty”, became quickly a running gag during the convention.

During our UbiLounge presentations, we not only gave you a live gameplay demonstration of the actual savegame shown to the press, you could also ask questions in the roughly 1 hour long panel – all in the spirit of the Anno Union. While we mentioned in advance that you should be early, you guys managed to pack the Ubilounge to its absolute max of sometimes 60 and more people attending each master class. Altogether, several hundred Anno fans watched, listened and asked questions during the presentations. 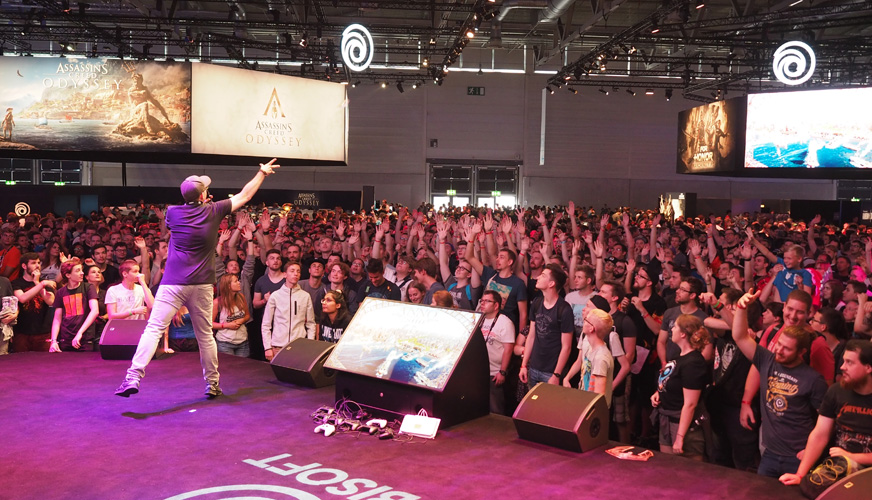 The Union community dinner
A very special highlight for us was the Union community dinner on Thursday evening, where we invited almost 30 Anno fans to come together to enjoy the company, the food and chatting about Anno 1800 and the Union. Even after the restaurant closed its doors, we all had a hard time to call it a day, so it went on until almost 1am. A truly brilliant Anno evening and we are thirsty for more, it might now have been the last time we host such an event? 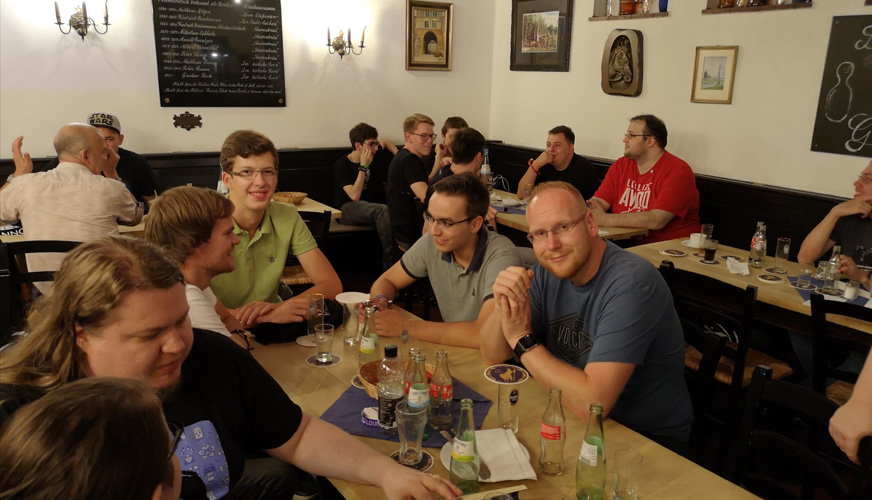 We compeletly missed to get all attendees on one picture, must have been the nice atmosphere which distracted us.

But how about the Anno Union members being unable to attend?
To give you a chance to see what we have shown to press and fans for yourself, we decided to will host an AnnoCast stream this Thursday, where we will not only recap the convention but also show you the actual gameshow build in action, including the content we have shown to the press and to fans in the UbiLounge. Last week, we asked you for questions and as this Union Update is already quite long, we decided to answer many of them in this Thursday’s stream.

You also remember that we talked about some nice Anno 1800 goodies during gamescom? To give you a chance to get your hands on the Anno 1800 gamescom loot, we will raffle out several of the pieces during the show, including also some nice giveaways from our friends at Corsair Gaming.
Let us come together this Thursday at 4.30pm CEST for our post gamescom stream at twitch.tv/ubisoftbluebyte

What’s to come in September and beyond
With gamescom 2018 behind us, there is a lot to talk about. In the upcoming weeks, we will dive into detail about the new world, expeditions and the museum and we start with putting the second session under the looking glass next week. We know that you have a lot of questions and we will make sure that the DevBlogs tackling the new features will answer many of them:
In upcoming Union updates, we will start to kick off a new fan initiative and present you the finalists of the Union ship vote.
But rest is for the wicked and there is still a lot to talk about up to February 2019. With a big Naval combat highlight in the making, more frequent streams, the next round of our Union focus test and even some not yet revealed features – there is a lot of things to look forward to so keep a close eye on Union Updates and Devblogs to come.