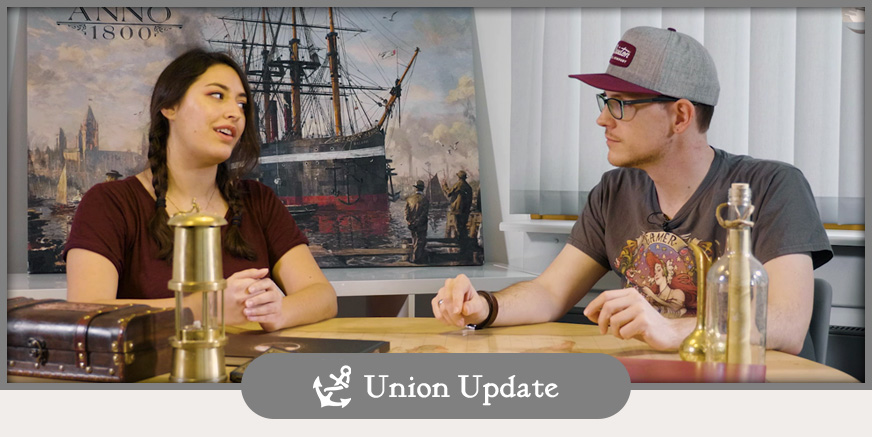 In this week’s Union Update, we bring you another episode of our Union Talk show, this time we invited Game Writer África Curiel Gálvez to talk about inspirations and work on The Passage’s tense campaign story and background.

With the Union Talk show, we not only want to keep you in the loop about recent developments and news from the world of Anno, we also want to provide insights into the work of our developers. Is there anything you always wanted to know more about? Are you curious about a specific aspect of game development or an ingredient of the Anno series? Let us know in the comments below for future episodes of the Union Talk!

Community Highlight: Meet thousands of Annoholics on r/anno
Over the last years, our Anno subreddit grew from a knowledgeable, albeit small corner to a huge gathering place for Anno fans around the world. By the time of this writing, the reddit.com/r/anno channel gathered almost 20.000 Annoholics with hundreds of active readers every day.
From gameplay discussions over funny findings and memes to elaborate guides, we highly encourage everyone to check out this inviting community of fans and experts!

A new episode of Anno Afternoon with a very special throwback to a classic
A nunchuk? What are Thorlof and Trenchcoat up to now? Better turn into this Friday’s very special Anno Afternoon Stream, as we dive into an old classic even many of you veterans out there might not be that familiar with!

Tune in this Friday at 5pm CET at twitch.tv/ubisoftbluebyte

Don’t miss our big Lunar Sale discounts on the Anno series!
Anything missing? The Anno series is currently discounted during our big Ubisoft Lunar Sale, the perfect opportunity to grab old classics or even dive into the world of the industrial revolution.
And if you reading this right now on January 29, you can grab Anno 1800 Gold Edition in our flash sale for the price of 38 Euro (or regional equivalent). Yes your calculation is correct, -60% discount for the Gold Edition, including the Base Game, Anarchist DLC and the Season Pass!