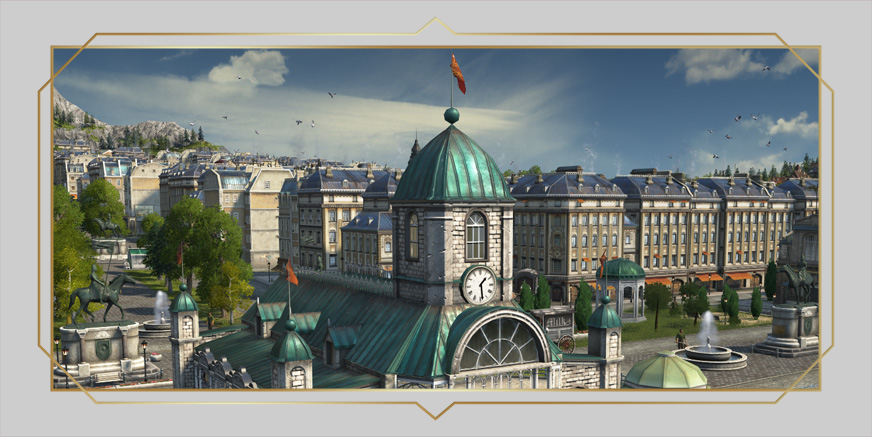 Union Update: Next vote ahead!

For the first Union Update for the month of June, we want to share some details about upcoming Union content.
During the last episode of our AnnoCast, we were able to present you Anno 1800’s UI design. From design to functionality, many of you shared their feedback and questions and our UI Design team would like to invite you this week to give you exclusive insights into their design and thought process.

Next week will be a little bit different, as we won’t have a classic DevBlog or Union Update. However, we have something exciting up our sleeves: the first stage of our next Union vote!
We don’t want to leave you fully in the dark, of course, so we can tease that it has something to do with ships and will give you some interesting insights about another third party character in Anno 1800.

Beyond that, you can also expect some new anniversary content for one of the most beloved Anno games in June. Can you believe that it has been 9 years already since 1404 set sail for the first time? Let us see what kind of fond memories and old anecdotes we can gather from our team. And as always we want to hear from you!
What are your personal best Anno 1404 moments, anecdotes or funny stories you remember?

With the engineer’s blog, we moved from the early years of the industrial era to the second wave of the revolution. Naturally, we want to highlight some of the wonders of that time, when the old age passed the torch to a new era. Finally, you can expect the reveal of the fifth and last residential tier as well.

Before we head over to today’s community Q&A, we have one more update for you. We plan to bring you the second community roundtable at the end of this month, this time with two different sessions for our International and German community. The roundtable is an event where we invite everyone from our community to an Anno Union voice chat session to talk about the Union, the game and its fans.
We will share the exact details and dates with you soon!

Nox29
Will you be scattering little easter eggs across 1800 like you did in previous games?
Answer: Some of you folks have a keen eye and were able to spot some easter eggs already.
Our developers love to sneak smaller and bigger details and easter eggs into the game. Fun fact: We do not even know how many of them will be in the game, as our developers themselves keep it secret.

T1MR
Will street networks be realistically simulated, so that pedestrians and carts can cause congestions?
Answer: The distance travelled on your street network will play a role in the transport of goods in Anno 1800. Production buildings will calculate the most effective way to get goods either from another production building or from the warehouse. As goods are physically represented in the game world, transporting carts will need to queue up in front of your warehouse in order to load or unload the materials. This can, if your street and warehouse network is not optimized, lead to traffic jams in front of the loading/unloading areas.
We had our own development blog dedicated to the logistic system, which you can check out here: LINK

schwubbe1980
Will it be possible to fast forward time like in 1404, so that the visuals and gameplay will run noticeably faster? (Anno 2205’s fast forward was too slow).
Answer: You will be able to fast-forward the gameplay but the exact parameters are not final yet. With Anno, we always have to find a balance between comfort and usability. Especially with all the different gameplay loops of an Anno game, combined in a large game world and economic simulation, forwarding gameplay too fast would lead to issues. Think about all the things you need to keep track such as complex production chains, economic balance, AI behaviour of your opponents or potential city incidents.

Gert8517
What I would love to see in an upcoming blog are some insights about the soundtrack of the game, if this kind of blog isn’t already in the works or even ready to go. The music in Anno games was for me, especially in the older titles, one of the important factors, which pushed the game experience.
Answer: We are aware that you folks love the Anno music and are curious how we design and create sounds for an Anno game. We are currently working on DevBlogs related to audio design and soundtrack but these blogs take some preparation time.

SirKju
Will tourists just come out of nothing or arriving from different islands? Will it be possible to make use of a sea blockade to cut your opponent off from tourist ships?
Answer: Tourist ships will enter the map and then travel around the session, stopping at any visitor harbour on the map and drop visitors based on the specific attractiveness level of a city. There will be ways to affect the tourism of an opponent’s island, keep an eye on the Union for future details.

drizzle64
I would like to raise something based on the previous gameplay tours through the cityscape of the game. The small people, which run around the various places, are comically huge in the farthest zoom level. I mean sure, you want to be able to identify them but it would make more sense and help the atmosphere if the residents would be small.
Answer: The not realistic proportions in Anno are a deliberate choice, as visual feedback units are not only an important part of the atmosphere; they play an important part in the readability of the game. On one side, you want that the game gives you the feeling of creating a lively city, on the other side need players to be able to get important basic game information when observing feedback units.
However, the current ratios are not final yet and we got a lot of feedback from the community. Rest assured that we will modify the proportions to be more in line with the classic Anno appearance you are familiar with.