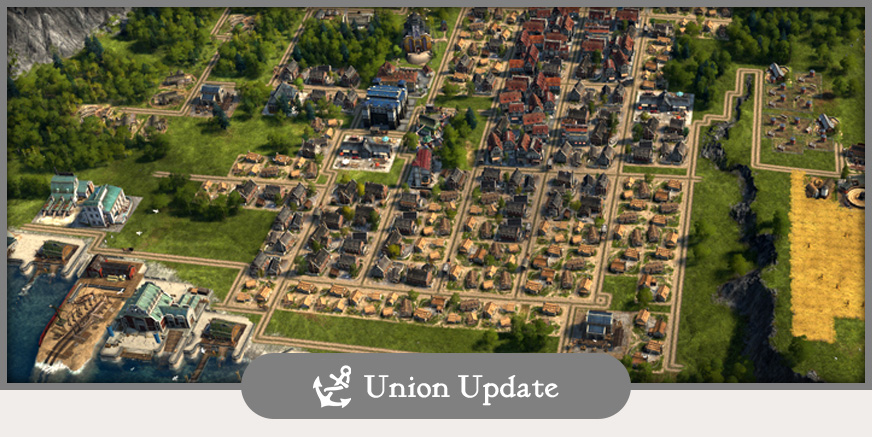 In today’s Union Update, we will once again give you answers on some of the most burning questions from our communities. You also can look forward to our upcoming DevBlog, in which our programmers Jonas and Johannes will show you how we teach our second party characters how to build a believable metropolis.

But before we dive into our QnA section, we have a small reminder: The Union ship design contest will end next week Monday. We got a few strong designs already and we are looking for the last few submissions entering the race before the beginning of next week.

DfZug
Will the number of wagons per train depend on your production or is it just a visual feature? Will the trains run faster or slower depending on their weight?
Answer: While the payload will not affect the speed of a train, the number of wagons will be an indicator for you how much oil is currently loaded.

Mr.Beko80
Will you need to construct power plants near to the residential area, which will further have a negative impact on your residential happiness? How will the electrical support work, will you need to power supply lines on your own or can you just upgrade your streets?
Answer: To pander your demanding investors, you will need to support them with electricity from a close by a power plant. However, you will not need to install power lines manually, as power plants have their own influence radii like the marketplace and the fire station. Electrical poles will automatically appear across streets, which are in the influence radius of a power station. When you upgrade your simple farm roads to proper streets, the influence of all buildings will expand which also affects your power supply. Power plants will have an impact on the pollution of your city but are not a real competitor against your smoke covered heavy industry.

Acroz.Gaming
While watching the video, I’ve noticed that they look rather static right now. Will you include more animation and visual feedback in the future?
Answer: Many assets used in the electricity blog are not final yet, so you can look forward to a higher level of detail and more visual feedback. Same goes for the oil harbor, the oils ships and the motor carts, which are currently in a low polygon state or getting overhauled. How about an update on that in a future blog or live-stream?

Sandi.V.
Will the roads cross the railway? Or will the railway line block the construction of road crossing?
Answer: You will be able to cross streets when building railway tracks.

olblf
Are power plants only using oil? I guess it makes sense from a gameplay perspective, but historically and logically, coal would have been the go to fuel. I would have liked if powerplants could use both coal and oil.
Answer: In Anno 1800, coal is finding is an important resource for many production chains and it is especially utilized in your heavy industry. Power plants need a very high amount of fuel in order to operate. If we would just use coal for our power plants, we would completely devalue the resource for other production chains and furthermore, we need to ensure that trains could also access the mines. The new electricity production chain including oil as fuel is an exciting new system, which challenges players but also rewards them with technical progress coming to your metropolis. We choose quality over quantity as making use of two fuel resources (oil and coal) would artificially bloat the system while at the same time, watering down the gameplay as a result.

Anno_2070_
Is he ascension to the next tier bound to the need on available and needed workforce or will it be more like in the past, where only a percentage of your residents was able to ascend, which further guaranteed that you always had enough workforce to run everything?
Answer: Anno 1800 will not have the classic ascension rights. If a residential building has all needs fulfilled to reach the maximum amount of residents it can inhabit, you can upgrade the house to the next tier by investing the needed construction material. There won’t be any limit for the number of residents you can upgrade, which means you can let as many farmers ascend to the working class as you like, even if that will cause a bottleneck for farmhands needed on your rural production buildings. Although, you will be able to downgrade buildings if you need an additional workforce in a lower tier.

nico_Darmstadt
If I start building production lines to create luxury goods, will it cause higher upkeep costs but also generate higher income?
Answer: Luxury goods will make your residents and your treasury happy.