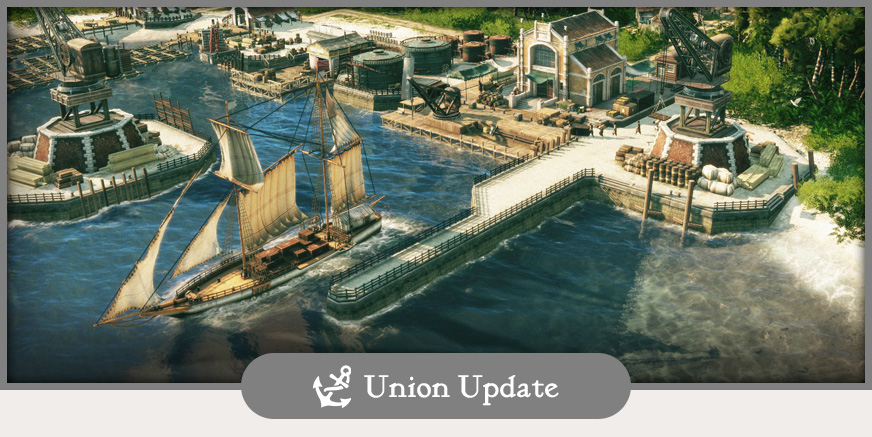 As the release date of Anno 1800 draws closer, we are in the final sprints to polish and balance the game. Creating the DevBlog takes a lot of time and much of the games content has been highlighted in some shape or form already, the game developer insights will take a short break this week. We brought you dozens of DevBlogs since launch of the Anno Union in 2017 and we still have some articles in our pocket leading up to the launch of the game.

But we won’t be lazy as we will ramp up the amount of Anno 1800 live-streams on our twitch channel with the AnnoAfternoon stream returning this week and the Community Corner coming back in the week ahead with a German episode including a special guest.

Livestream: AnnoAfternoon
It’s time once more for our Community team takes you on another Anno 1800 Twitch adventure! In the next episode of our AnnoAfternoon community stream, we will venture forth into the new world together, when we listen to your suggestions as to how we should build and name our cities.

Last but not least, we have prepared some answers to your most burning multiplayer questions in today’s community Q&A.

FerudaFarstaria
When we add friends from our friends list. Does this include the Steam friend list and Uplay? Or do you have to find your friends in the game, and add them to your friends list? I’d really like to know if this does link to friends lists in Steam, and Uplay.
Answer: Anno lists steam friends as well as your Uplay friends. In case you invite someone from you friend list, Anno does automatically select the right backend (Steam or UPlay) for the invitation and also receive and handle the invitations from both systems.

Mattly
We did find that once we had expanded into the new world we had to give up due to constant desync’s. As we are all on fibre and all in the same country (New Zealand) could this have been caused by the need to communicate with the host server where ever that is located or was it a known issue that has been worked out in these final weeks?
Answer: We identified and fixed many reasons for de-synchs thanks to the great participation of Closed Beta. This also includes many de-syncs related to the South America session. It is not very likely, that your desynch problems as described where caused by network issues, as because Anno tries to keep the connections “as local” as possible. Only if the NATs of the participants are not compatible, we are forced to route the traffic over Ubisoft servers to enable the players to join. But this also can be resolved by players by adding Anno to the exception list of your router.

elmoh1one
I would be interested in a whole Devblog about the topic synchronization. Which kind of data is exactly synchronized? How is the system checking if there are disparities between the different computers and how does that coherent with the simulation of the game?
Answer: Simply speaking, every single player action will get recorded and synchronized before the system shares all input data of for the simulation with every other participating player (every PC in the session calculates all steps of the simulation for every player in the match).

Drake-1503
Does that mean that saved multiplayer matched can be continued with different players? That would mean it would be possible to create a staged savegame with already established cities instead of an empty map.
Answer: You are able to continue mutliplayer savegames even if the original players are not available anymore. When new players join, they can “overtake” an empire and continue to progress and expand with that game state. While it is technically possible to create scenarios that way, you would need to have a dedicated player for every single party as you cannot take control over two or more empires.

The_Waith_Lord
I would love to see that you could also do a search for players based on language and region to make it easier to communicate with the other players.
Answer: When looking for a player, our matchmaking takes the region as well as language into account. Should the system be unable to find a player after a while, it will expand the search for players with the same language across the globe. If the system is still unable to match you with someone, it will also widen the search to global players with any language.