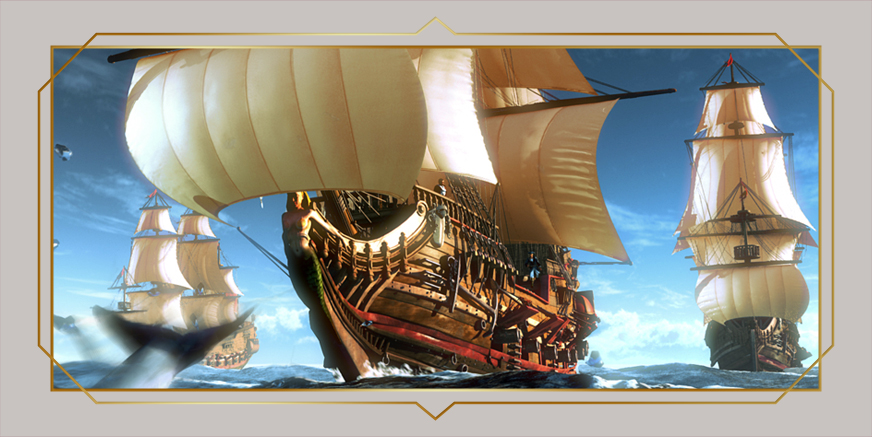 „My most beautiful memories about the game are about my then-girlfriend and my cousin, as they were as crazy about Anno as I was. We turned on our notebooks, sat down on a round table in front of the chimney and played until the middle of the night. Anno was a companion on my lifes journey.” – Striffelbaer

Many of us keep many precious memories, as they were part of our gaming lifes for so many years and the reason for that much-cited special Anno feeling. These moments show us that across the many years and titles in the series, a great and unique gaming community was always part of our journey. Eleven years ago, Anno 1701 had its maiden voyage- full speed ahead into the third dimension to bring us new visuals and features to allow us to immerse ourselves in the world of Anno like never before. We would like to raise our hat to Anno 1701 and its community, and therefore this week’s content will be dedicated to the first Anno in 3D!

Anno 1701 was an important leap for the series as a whole, as the third Anno introduced new features and systems and with that, set the direction for future titles. We would like to highlight the special memories from our community today and the upcoming Devblog will explore our own memories as Anno developers and why Anno 1701’s heritage is still of importance to the upcoming Anno 1800.

Did you know that Anno 1701 had two board game tie-ins and even a book? Maybe some of you even own one of these precious pieces? We are interested what objects you might have in your collection and if you are a fan of the idea of expanding the Anno universe with board games or other merchandise!

Twitch Stream: Anno 1701 Let’s Play
It’s anniversary week so how about a small party? And what would be better suited for a celebration than to take seat in a cozy chair while watching us sharing memories and putting some effort in building our own Anno 1701 settlement. We will kick off our first Let’s Play stream this week in order to celebrate the anniversary of Anno 1701. Join our small party stream this Thursday 26th of October, 4:30pm CEST on: twitch.tv/ubisoftbluebyte

Fan Creations
We asked for your best Anno 1701 memories and creations and community member and artist Anno90 answered that call. We are happy to present a true Anno Union masterpiece:

Last but not least, we would like to share a few of those very special Anno 1701 Union memories, funny throwbacks and even touching stories:

Soulridder
I guess Anno 1701 was my first Anno ever. Back then, I played it on a Nintendo DS, because I did not own a PC at that time. ^^ The most satisfying experience was build your city on a volcanic island and later take someone’s island for your own just to expand it even more. Not quite that easy with a negative income where my only income came from raiding other AI players, but it made fun to rebuild the island and expand it once it was taken, especially because I couldn’t build much and once I took some island completely. I also played games where I just build up my city without raids, but a volcanic island was a must-have for me and still is in all Anno games where a volcano exists like in 1404.

Marc_The_Miner
I was born 2004, so I am fairly young. My first Anno game was 1404 and I was so excited about the game that I wanted to get the more Anno titles and I ended up playing 1701. Despite being an older game, I really liked the visuals and had a great time playing. The best thing about 1701 is that you can declare your independence from the Queen and that you can attack other civilizations. That leads to more gameplay freedom as nobody tells me what or how to do it!

NK3D
My most beautiful memory is an also a very personal and special moment for me. As a small boy, I desperately wanted to play Anno 1701, especially after playing 1602 and 1503. I just wanted to experience the look and feel of the new title. One day, quite some time after the release of 1701 had passed,; my mom came home and brought a gift for me. It was Anno 1701 – The Sunken Dragon. She told me that it was a great bargain (single mother and we had not much money) but we both had no clue that it was an expansion and I was happy until I realized that I could not play it…. I was sad and my mom did not understand why until she did some research and understood that it was not the full game. She promised that, with my next birthday or Easter celebration, I would get Anno 1701 as a gift. And indeed, that is what happened! It was an amazing moment and we both were incredibly happy about the outcome. I spent some many hours playing Anno 1701 and I still play it today. It holds a wonderful emotional memory for me and it still holds up greatly. Thank you for bringing this kind of moment with the anniversary content back!

LadyH.
Anno 1701 *dreams*, just wonderful times <3
I can remember how sceptical I was at first. An Anno in 3D, can I even play that? I had problems with my eyes back then, especially with everything in 3D. And then, I had the pleasure to get invited to test the game at Related Designs in Mainz. It was brilliant; I just hopped on my bike and drove to the studio. It was a great day, being able to play the game for one day, while the developers watch you and ask you plenty of questions. Oh and then there was the fan meet and greet on Castle Ronneburg. We slept in a B&B and there was a special surprise event in Büdingen. There was an actor outfit doing a nightly tour through in historic garbs re-enacting old stories from the city Büdingen.
After that, we had a meet&greet in the actual castle. We started with a tour, had a lesson on a bow shooting range and a medieval dinner with a herald being responsible for the distraction. I have the fondest memories of that event but I can tell you that it was a lot of work to organize everything. It was great to hear that the son of the chef of the restaurant was a big Anno fan. I just invited both to join our festive party and I made sure that they even got some Anno goodies. Everyone was just delighted. We had plenty of sponsored goodies for everyone, including a real fisherman’s pipe! What a brilliant community, just wonderful.

You can find more pictures from the event on LadyH. homepage: http://ladygames.de/party2007/