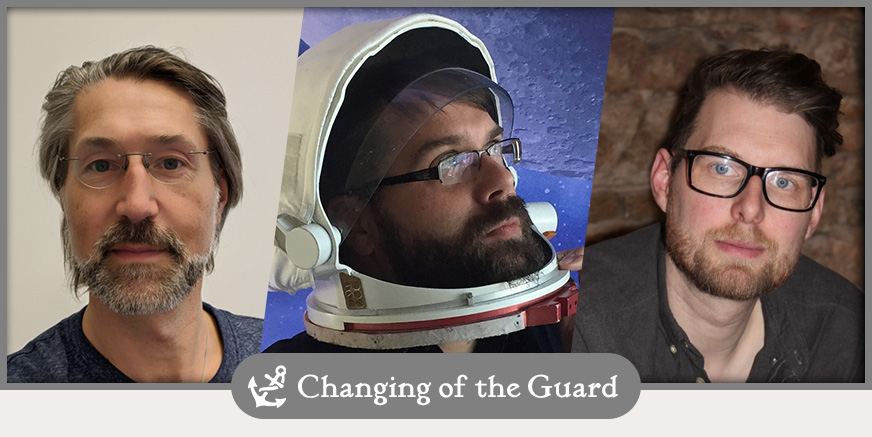 Changing of the Guard

As we are getting ready to reveal our 2020 plans for Anno 1800 next month, we want to inform you about some changes in the Anno development team. At the end of last year, we said goodbye to two long-time veterans of the franchise, Burkhard Ratheiser and Dirk Riegert. While we are sad to see them leave Anno, we can appreciate that working on the same gaming series for over 15 years is a long time and that the huge success of Anno 1800 makes this the perfect time to hand the scepter over to our new leadership. Rest assured that both are staying with Ubisoft Mainz, exploring new ideas for future projects!

Burkhard is not only one of the co-founders of our studio here in Mainz but has been instrumental in Anno’s transition to full 3D as the Lead Programmer of our game engine during the development of 1701. Following that, he worked on Anno 1404 and 2070 as the Head of Graphics and R&D, before moving into game production with Anno 2205. Over the last years, he led Anno 1800’s development as Executive Producer. Of course, many of you know also know him from the eponymous “Burkhard’s Trail” easter egg from Sunken Treasures.

“I’m very thankful that I had the chance to contribute in several different roles to this great franchise. For the last 15 years Anno has always played a big part in my life and with Anno 1800 being the fastest selling Anno ever and for many also the best installment so far, the time has come for me to move to new ventures, handing over the baton to a new team. I would like to thank the Anno community for their great support and feedback over all these years, knowing that the fruitful collaboration will ensure that Anno has a bright future, continuing in providing countless hours of joy and excitement to our fans.” – Burkhard

Dirk probably needs no introduction to Anno devotees, given the number of interviews and live streams he has participated in over the years, earning him the loving nickname of Karrenschieber (“cart pusher”).  He is one of the driving forces behind the Anno games developed in Mainz, starting as Lead Game Designer on Anno 1701 and 1404, before taking over as the franchise’s Creative Director with the Venice add-on. He then took the franchise into the future and even space with Anno 2070 and 2205, before leading the Anno team and franchise into the age of the industrial revolution with Anno 1800 as Senior Creative Director.

„When I started as Lead Designer on ANNO 1701, I wouldn’t have dared to dream that I would help shape five Anno games over the coming 15 years! It is said that one should quit while they are ahead, and after the great success of ANNO 1800 last year this moment has finally come for me. I am already working on new, exciting projects within Ubisoft. The baton with the golden nine engraved in its knob has been passed on to Manuel. I for sure know that he will take perfect care of it.” – Dirk

Which brings us to our new Game Director, so please welcome Manuel Reinher!

Manuel is a true strategy gaming veteran, having first started his career as an artist at Phenomic on Spellforce in 2004, before filling a variety of art related roles on games such as Spellforce 2 and Battleforge (by then as EA Phenomic, as the studio had been acquired by Electronic Arts in 2006). He has now been with Ubisoft Mainz for over 6 years, starting as Lead Artist for the futuristic cityscapes of Anno 2205, before leading the art team responsible for the detail-obsessed 19th century world of Anno 1800. As Game Director, he will oversee the overall future of the Anno franchise, both for future Anno 1800 content and beyond.

“Hi Anno Union, I’m Manuel, and extremely honored to follow in the footsteps of Burkhard and Dirk. Working on Anno for the last years has been a fantastic journey: After our adventures in space we brought the game back to a historical setting and we are extremely proud to kick off 2020 with new ideas and full of energy.

But, before we head into a bright ANNO future, I want to take the opportunity to say thank you: The success of Anno is just possible because of our hard-working team and the fantastic support we have from our community. So, I grab the baton: we have more opportunities than ever and I’m very excited to take the next steps together with all of you.” – Manuel

And that’s it for today! Please give a round of applause to Burkhard and Dirk for their many contributions to Anno, and a warm welcome to Manuel! And as always, keep an eye on the Anno Union, as we get ready to unveil our plans for Anno 1800 in 2020!