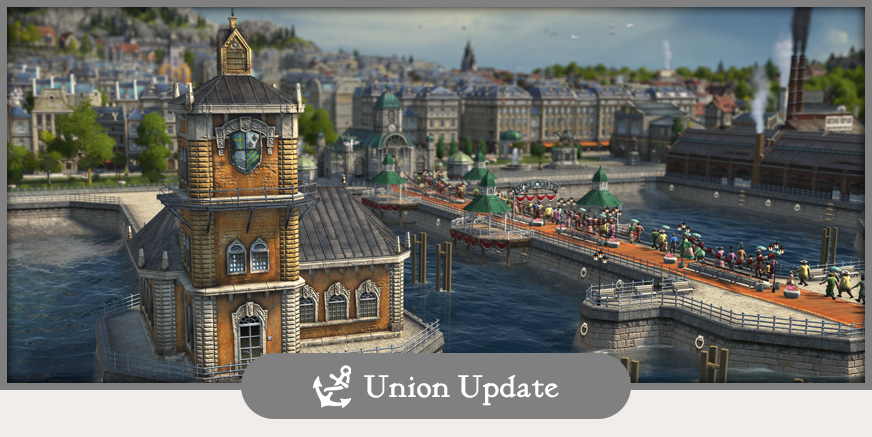 The end of September is near and we are about to wrap up our big gamescom feature list with this week’s blog about the New Worlds residential tiers and a brief look over the museum and the blueprint mode in the week to come. To give you a glimpse of the upcoming month, we are working on some exciting DevBlog topics many of you want to see for a while now.
On another note, the next round of the Union focus test has started and we are looking forward to daily feedback reports from our testers. However, there is more to come, as the Union tests will be soon open for bigger groups, allowing the Union to test the game in a larger scope than ever before.

We will also add the first Anno Fan Initiative pages to the website and if you are a fansite admin or content creator, do not forget to apply for the program!
You can get further details about the program here: Union Fan Initiative

As we are also working on some fan resources such as wallpapers, are there some specific things you think are a must have or other material such as streaming layovers or even emotes you would like to see?

EGX Birmingham Anno 1800 Panel
A short update from our tour to the industrial Birmingham. During last week’s EGX expo, we had the chance to present the game on stage during a live-stream and if you missed it, you can watch the recording of that presentation here:

Our Expedition blog raised some questions in the Anno Union, let us finish this week’s Update with another Community Q&A

ako199
I am curious how you manage the availability of expeditions and how many different missions you will have in the game?
Answer: Reaching residential tier III will also unlock the Expedition feature. At that point, the captain will notify you about available ventures in the expedition menu. Expeditions will be randomly generated and spawn in intervals, while harder ventures will be available in the late game. You will be able to take on as many expeditions as you like, only limited by the currently available adventures.
We have currently four main types of expeditions: zoological, archaeological, rescue missions and pirate hunts. For every type, we have a large amount of various events you will encounter, with the challenge and amount of the events based on the difficulty of the expedition. All together, we have a large amount of events with many branching choices, depending on which items you brought along the journey or how a previous encounter turned out. The expedition window will only give you an idea about the difficulty, type and likeliness of challenges you might encounter during an adventure, which gives you a chance to prepare, but only hints on the various possible encounters.

AmpeImann
I really like the idea of the expeditions, but I have a couple concerns about how they will exist in the game. Are the expeditions going to be necessary to core gameplay? Or will they just be an extra thing you can do if you want some rarer items? Will expeditions be as useful or interesting in the late game? Are the rewards potentially game changing?
Answer: There will be various alternative ways to get your hands on items, such as trading with neutral factions, quests, the tourist harbor or the world fair exhibitions. The items you can acquire through expeditions are based on their various types, with the focus being animals, cultural artifacts, specialists and military equipment from pirate hunts. While you will have alternative ways to get your hands on all these item types, expeditions will be the only way to get the rare animals and artifacts for the zoo and the museum specifically. That means that if you want to have a collection of the rarest exotic animals in the game, you will need to take on challenging expeditions.
Drop rates of items are based on expedition type, climate, rarity stat and difficulty of the Expedition. Which means that a rare black panther have always the same chance of dropping in a hard zoological expedition to the new world. Furthermore, you will always get three items from the loot table with every expedition.
Bottom line: they will be a risk to acquire but you have an idea about what items you can get when choosing an adventure. We don’t want that expeditions are a necessary feature for Anno’s core gameplay and we will also make use of our Union focus testers to see if the feeling and the balancing is right.

Der3ine
How will you notice that you already got a reward from an expedition before finishing it?
Answer: The rewards for the expedition will be always granted at the end of an adventure. First, your ship will travel to its destination and when arriving at the marker, encounter various events, which you have to go through.  During the events, your morale bar will sink but you will be always able to send your ship back after every encounter. If you send your ship back, you will not get any rewards from the expedition itself but will keep items you acquired from succession in special event encounter. These rewards will be immediate granted after the specific event encounter and therefore, you will be always aware if you got already items, which might be worth saving before finishing your expedition.

BfVorsteher
Is it possible that an Expedition has a negative effect such as bringing back an illness to your island. Imagine you don’t have enough doctors in your city which leads to 20% of your residents dying while if you have a good medical supply, only 5%?
Answer: Expedition events won’t influence your city, economy or have any other effect on gameplay elements outside the expedition itself other than the items you get as a reward and can use in your city. While Expeditions are an exciting feature to explore the world of Anno and to refine your gameplay with items, we do not want that they become the central gameplay element for Anno 1800.

Schminky
I think it would be interesting if various original scenarios from the expedition which actually happened back than would be used for inspiration such as the competition to reach the South Pole of the Asmussen and the Scott. Will the background artworks for the expeditions represent the specific region and climate?
Answer: Many of our Expedition events are inspired by actual adventures, scientific journeys and stories from the 19th century. We will send you to various climate zones, represented by the markers on the world map, artwork and their own specific encounters.

CreatureotS
You often talk about difficulty levels, which was a thing in many Anno titles before. Will we be able to customize our own difficulty by altering parameters, such as the likeliness of fire, or will the game just have preset difficulties?
Answer: We will have three difficulty levels in the game: Easy, Moderate and Hard. But as the sandbox experience is part of our core DNA, you will be able to create your custom game rules affecting many different parameters of the game world and the AI. How does the idea of an own blog showcasing the customization options of a match sounds to you all?