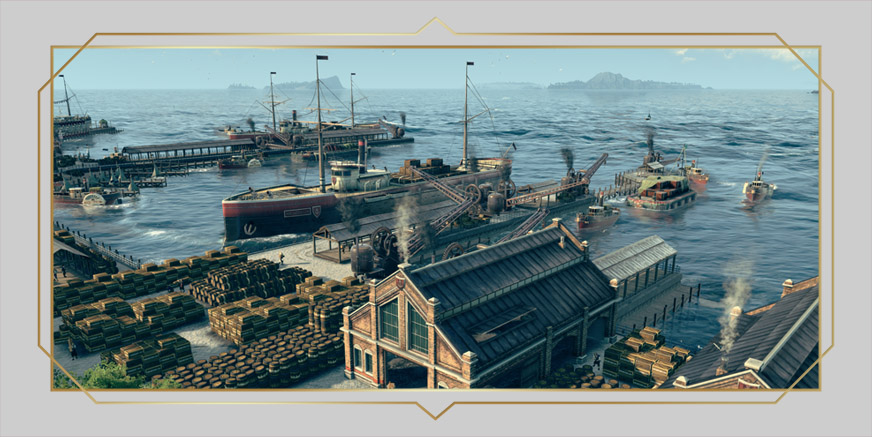 While blogs are a great way for you to get insider information about the development and for us to get your immediate feedback, we also need to know how the game actually feels and plays when gamers get their hands on Anno 1800.

That is why our second Anno Union Playtest will happen this week, with a small group of active Union members visiting us here in Mainz to share their feedback about the Anno 1800 gameplay in its current state. Expect coverage about that playtest with next week’s Union Update.
This Anno Union playtest marks only the beginning: From next year on, we want to give more Union members the chance to get their hands on the game, whether it is another on-site event with a small group of players, diary studies or larger online tests where you can participate from the comfort of your own homes.

So keep an eye on future news about upcoming playtests, and keep in mind that being an active and constructive member of the Anno Union is the best way to get an invitation to one of the playtests. We also might leverage some ideas from the Union for future tests, such as an application process to identify potential candidates.

Anno 1800 Livestream: 14th December at 4:30 PM
The end of the first year of the Anno Union draws near, but we wouldn’t want to leave you without some more streaming goodness.  And this time, we will not only talk some more about the game, but it will in fact be the very first time we actually show Anno 1800 live gameplay.
Turns out that, except for some prototype footage and some small clips and screenshots here in the Union, we haven’t actually shown any gameplay at all so far, so we should maybe make amends here.

We will as always provide you an article with the embed Twitch stream shortly before it starts, and if you will not be able to join us, we will of course provide a summary and a link to the show the week after.

AnnoCast 02 will air next week Thursday, 14th December at 4:30 PM CET on twitch.tv/ubisoftbluebyte

Vote Closing next week
With over 2000 votes, it’s time to finish up our vote for the world fair event. You completely forgot to leave your vote? Then consider this your last call to make your voice count before we close the community vote upcoming Monday. As there are only a few weeks left until the end of the year, expect the next vote to hit the Anno Union early 2018.

Talking of votes, how about we leave you with a small teaser: we bet you still remember our first big vote and its winner, the visionary Artur Gasparov. Well, while he was quite busy after an exhausting election, we managed to steal a bit of his attention for this week’s DevBlog.

As always, let us know what you think in the comments below.

fleischlaberl
We are still missing some information about the military system and I would like to get the bigger picture (just as an example, how will the takeover of an enemy harbor will look like?). Only then will I be able to share my opinion about the ground units. Maybe share more information first before you discuss things internally?

Basti: Feedback is an important driving force for us but we also need to get the greater picture. For that reason, we often have to discuss certain aspects in the production team first. We understand that especially after the military blogs, you direly want more information. You have to be a bit patient with us for a moment but rest assure that we will come back with further details regarding military.

DiruKamachi
I always loved the Postcard Mode and used it a lot, especially when I managed to get one of the animals in Anno 1404.

Basti: The postcard mode will be back in Anno 1800 and we can’t wait to see all your creative energy when it comes to Anno panorama pictures.

palemale53
I have always been very interested in the process by which “assets” are created. I was particularly interested in how you achieve such a detailed texture while not sucking the life out of my poor PC. Is there any chance of a time-lapse video of this process, of taking the concept and making these fabulous buildings in an Anno game? Pretty please …
Niclas-J
This may be a big ask, but I would love to see more videos regarding the development of 3D assets.

Basti: Even smaller videos take some to time create but we will see that we can spice up future articles with more video content. Time lapse videos are even more difficulty but let us see if we can find a volunteer in the team for that.

OneclickLP
Will there be unicorns?

Basti: I know exactly why you ask that so…..no comment 😀