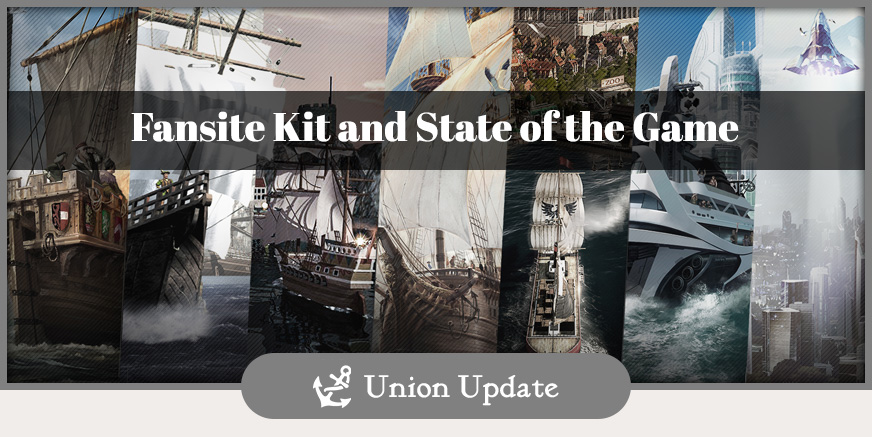 Union Update: Fansite Kit and State of the Game

While we work on the upcoming game update 3.2 as well as the next content drop, which will enrich Anno 1800’s game world quite significantly, we have a few things in today’s Union Update to endure the waiting time until we lift the curtain on the content and when it lands.

Anarchist Propa….promotional video contest ends this Friday!
Our creative contest, in which you can submit your own promotional video for your empire, ends this Friday. Still two night shifts worth of time to let your empire shine! Remember: We have not only great gaming gear from Corsair for the top three winners, we will also give you a spot in the limelight, sharing your creative works on the Anno Union, social media and during live-streams.

Fansite Kit 1.0 has landed.
We released our first teaser of our Anno 1800 fansite kit a while ago and today, we want to share the first release version of our kit with the Anno Union. With the first release version, we added all of our detailed key-arts as wallpapers for various devices, including an anniversary wallpaper as well as a set of emoticons free to use on your platform of choice.

Is there something directly missing in our fansite kit which you would love to see in future or even something useful or just awesome the community created which we should add?

With the latest Game Update 3.1, we continue to work on various game improvements as well as upcoming gameplay content. Throughout the year, Anno 1800 will receive several further game updates and various DLC additions not only from our Season Pass content but also free content updates such as a coop mode, statistic building and more. We know that you are waiting for details when you will be able to start the hunt for lost treasures or to team up with your friends to create your mega-empire. With the Anno Union, we are committed to work with your feedback but that also means that our team spends time to analyze the tons of data you provide with your reports and your discussion on the forums and on other community platforms. The journey just started and a vast and feature rich game like Anno 1800 deserves the time and care to grow based on your feedback.

We also want to tackle reports about a few players still having issues with progressing through campaign quests or multiplayer desynchs. We will share the exact update notes about Game Update 3.2 and the release date pretty-soon. After 3.2, we will fully focus on the next larger content drop: game Update 4.

But until we share some dates for upcoming content, we want to ramp up conversations with all of you. And to get us all on the table, we invite you to share your most pressing questions in the comments below for the next two episodes of our community corner live-streams.

To give every one of you a chance to get your questions answered, we decided to not only rely on our live-stream chat but also gather questions for the stream here in the Union. This way, you might be able see the response to your personal question in the recorded broadcast if you cannot make it to watch the show live.

We are looking forward to the show and your questions in the comments below.