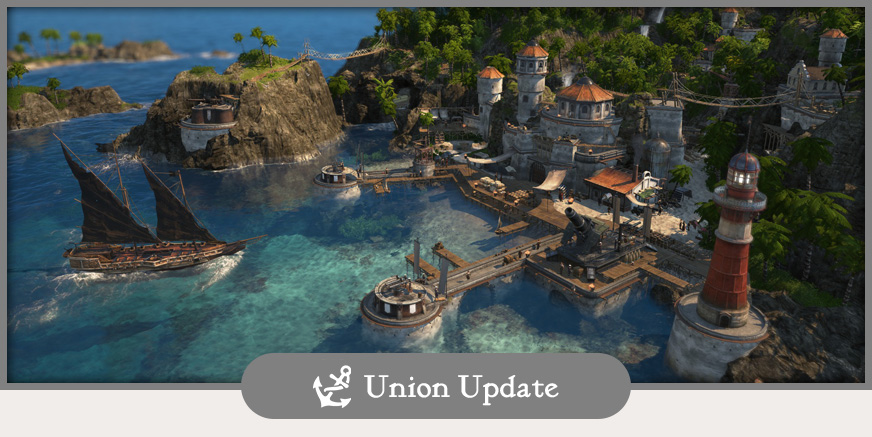 In today’s update, we detail everything you need to know about our upcoming Open Beta and reveal the much-requested final system requirements for Anno 1800!

Let’s talk Open Beta
The Open Beta is the perfect opportunity for you to test the game prior to its launch. Starting on April 12 and running until April 14, it will give everyone in the community a final chance to test Anno 1800 prior to its release on April 16.

Open Beta Game Content
You will be able to test a near-final version of the game and see the improvements since our Closed Beta for yourself, including access to the Multiplayer mode. Moreover, while game progression will again be capped at tier 3, we will for the first time invite you all to get your hands on Anno 1800’s story-based campaign, as the complete first Act will be part of the Open Beta.

There’s no NDA, so stream away
With this being an Open Beta, there won’t be a NDA. Therefore, you are not only allowed, but also in fact highly encouraged to share your experiences and to create content, whether it is streaming, videos or resource calculators!

If you’re on Social Media, make sure to use the Hashtags #Anno1800, #AnnoUnion und #Anno1800OB and tag our channel @Anno_EN. That way we can share all your great creations with the rest of the Annoholics community.

Save games will not carry over into the full game
Your Open Beta save games won’t carry over into the final version of Anno 1800, so you are free to go absolutely crazy and try wild things without having to worry about long-term repercussions. You also won’t be able to update the Open Beta to the full release version, so feel free to delete the Open Beta as soon as it sends to save space on your hard disk.

We always try to give you some context and explanations for your decisions- so why can’t your save games be carried over? One key reason is the way our AI works in the game. As the Open Beta content is limited to the first three (out of five in the full game) citizen tiers, the AI will of course also be blocked from progressing any further (as to not have an unfair advantage compared to human players). This could lead to issues with the AI if you were to carry your save game over into the full game, where they would suddenly have access to tiers 4 and 5 again. Our top priority is to ensure that you will have the best possible experience playing Anno 1800 on April 16, so to avoid any issues with such scenarios, we decided against carrying over save games. Rest assured that this issue won’t appear in the full version, where there are of course no limitations on the available content (for either AI or human players).

Is there a reward for participating in the Open Beta?
We are glad you asked- yes there is! Participants in our Open Beta will be able to earn the exclusive “Chess Table” decoration, which can be claimed from the Ubisoft Club after launch! All you need to do to earn it is to play at any time during the Open Beta period. 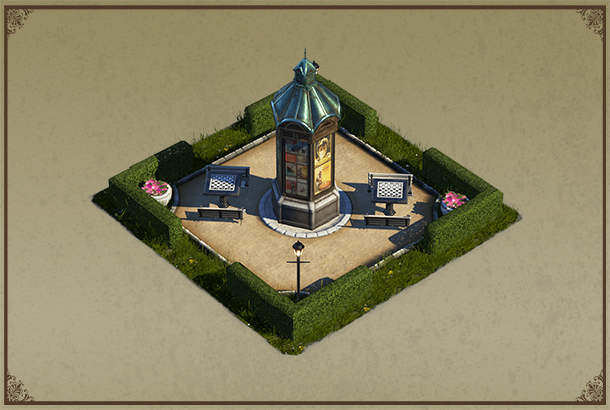 How to play the Open Beta?
Anno 1800’s Open Beta will be available and open to everyone via Uplay or the Epic Games Launcher. You won’t have to register at the Anno Union and can just download the game as soon as the pre-load becomes available from your launcher.

We prepared a chart for you with the release timing of the Open Beta. To make sure you are ready the moment the Open Beta begins, we will also offer pre-loading starting from April 10. 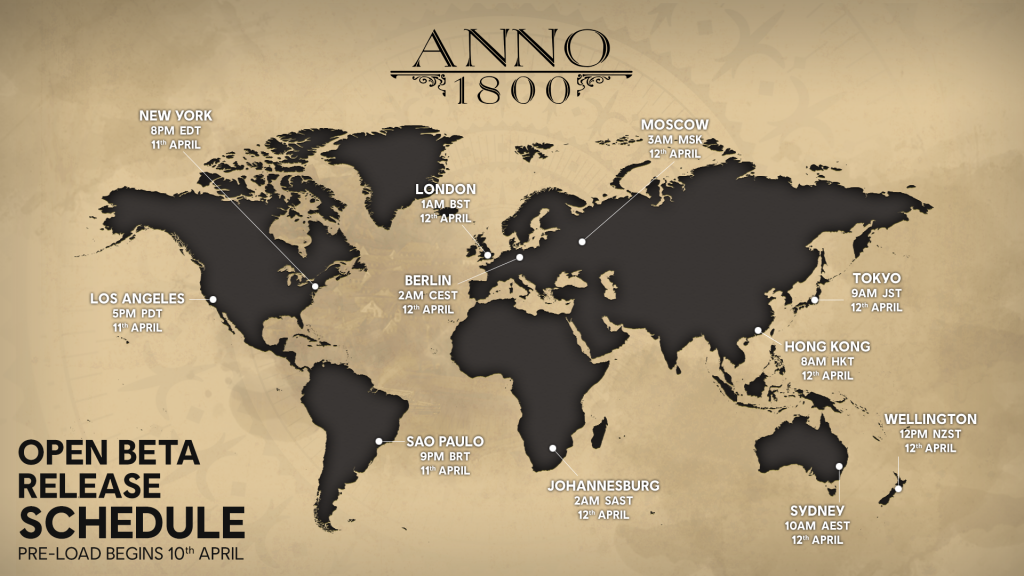 Updated: Always-Online for the Open Beta

We also want to give you a heads-up that the Open Beta will require a constant internet connection to play. Please note that this is not the case with the main game, as you will be able to fully enjoy Anno 1800’s singleplayer modes while being offline!

The final system specs are here
After spending some additional development time optimizing the game performance following our Closed Beta, we are happy to finally announce the official system requirements of Anno 1800. We tried to break them down into some of the most common settings scenarios to give you a better idea of what to expect.

We have also been hard at work with our friends at Intel to optimize the game for integrated GPUs, and are happy to be able to include some of Intel’s iGPUs in our system requirements matrix (a first for the Anno series!). We hope that this will allow an even wider group of players to explore the industrial revolution with us. 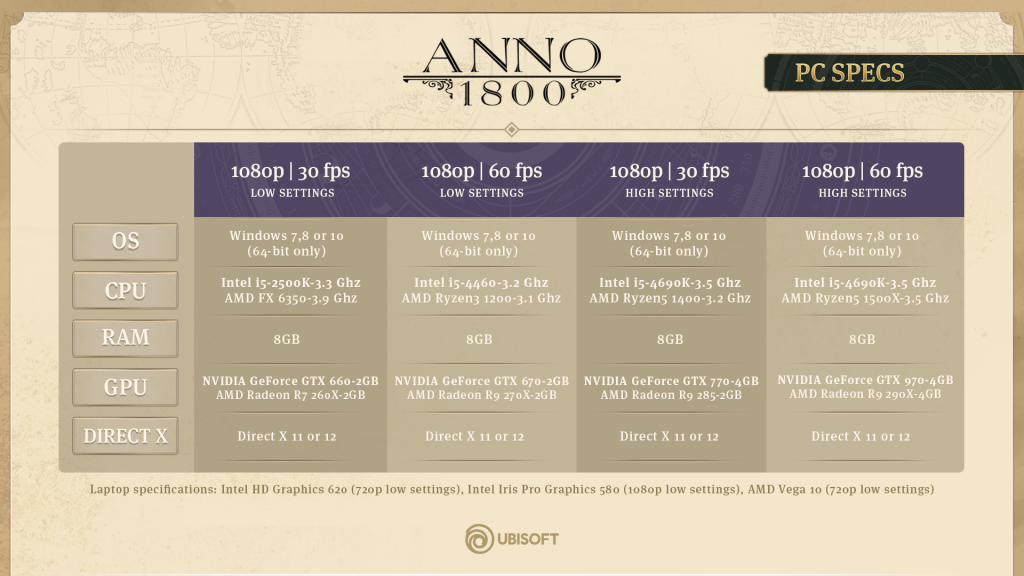 We will stream our panel at this year’s EGX Rezzed live from London
Anno 1800 will be playable at EGX Rezzed 2019. This year’s event, taking place at London’s Tobacco Dock on April 4-6, is an opportunity for you to lead the industrial revolution and try out new gameplay. Also, join Bastian Thun, Anno Community Developer, on the Developer Stage on Thursday 4pm GMT+1 as he provides an insightful commentary into the world of Anno 1800.
You can also head over to their Develop session page to find out more details.

Keep an eye on the Anno Union as we will share the live stream on our website this Thursday at 4pm CET.

Next AnnoAfternoon: Lead the industrial revolution together
Following the stream from EGX on Friday, we will have a new episode of our AnnoAfternoon community show where Guddy and John need your help to steer their empire successfully through the industrial revolution. As always in our community livestreams, you can have an impact on the way we play while meeting other Anno crazy strategy game aficionados.