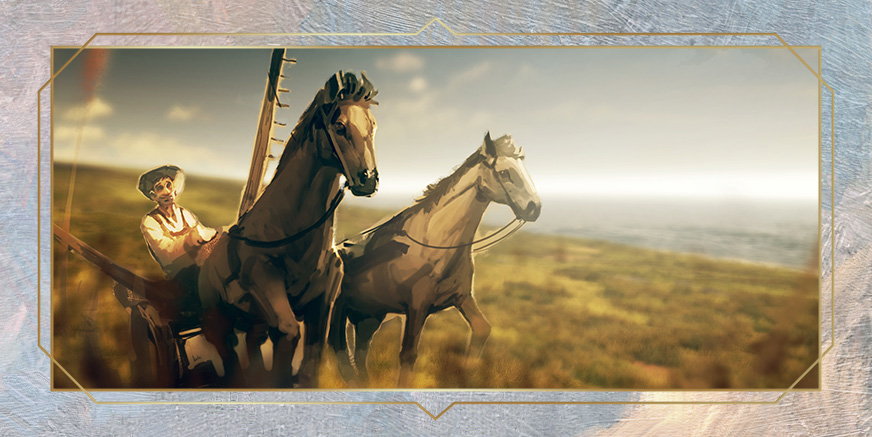 We have been farmers for more than 10,000 years. We think of rice terraces, cereals and livestock, of Nile irrigation, cabbages and beekeeping. If we are here in 10,000 years, there will still be farmers. After all, they endured the century that arguably saw most change.

A typical farmer in 1800 had similar tools at their disposal, as two-hundred years previous. But the new century brought iron ploughs, fertiliser, seed drills, and threshing machines. Though the new yields were huge, life and work were no less hard.
In Anno 1800, farmers epitomise rustic life. The simple things. To work the soil, tend the animals, and breathe fresh air away from the burgeoning smog. After a long day in the fields, a farmer wants to sit by the fire with family, and speak of their strange neighbours in hushed tones.
They don’t have a lot – or need a lot – and quick as hare, they’ll tell you so. Speaking their mind comes ‘natural’, and honesty is important, when you need to gauge feeling.
Yet they are also sympathetic. This business of yours, vast and sprawling as it is, goes far beyond their powers of cognition. Problems are to be expected – heaven forbids a farmer telling you how things ought to be run. And yet, while they are just the foundation on which the vainer elements of your society stack, you will achieve nothing without their love.

Depiction of a rural lifestyle
When you draw a picture of the industrial revolution, the rural population is probably not the first thing that comes to your mind. As the first residential tier, farmers serve as a throwback to old times, you could even say to the other historical titles of the series.
While the tier should depict a lifestyle that defined our society for thousands of years, the life of the farming people changed with the dawning age of technical marvels and urban life.
As workforce is now a factor in Anno 1800, they should have a distinguishable charm and character but also need to fit in a cityscape dominated by other residential tiers, especially in the later stages of the game. When setting the art direction for a residential tier, you always have to think about how their design will work together with all the other elements of the game.

A recent Concept-Art for the farmer residential buildings. During production, many buildings going to several reworks until we find the right look and feel.

Farmers are self-supported, used to their independence from most of the modern amenities. From their clothing, portraits up to their buildings, they are proud and hard-working residents, often overlooked by the evolving society. While architects plan modern housing space, farmer’s property should feel self-build rather than a product of a construction company. Their residential buildings resemble country houses, with wooden boards and small individual decals.
If you watch their buildings closely, they should feel like a postcard from a more calm time, where people minded their own business but also enjoyed a hard but probably simpler life. Naturally, that style should also fit their production buildings.

Backbone of your future empire
If you do some research on the history of any influential city in the 19th century, you notice that there is a significant spike in population. Nevertheless, the rural population had still an important role in society and economy, as farm products supported the growing needs for foods and basic goods for the rising world population.
Most players tend to construct their first buildings near the coastline in order to establish the basic food supply and lay the groundwork for future production. This also creates almost its own small village to support your expansion, as you probably plan the city centre of your future metropolis more land inwards of your island.

The main gameplay purpose of the farmer tier is to produce two kinds of wares: the first goods to fulfil the demands of your residence in order to advance and secondly, the foundation for some of the future production chains in higher tiers. So you not only have to account for the current state of your small settlement, it makes sense to account for the later growth and size of your city. While advancing through the first tier should be easy to achieve, farmers will stay an important part of your population.

You decide if you either go for a big farm village to support your whole island, let the modern city grow around your cottages or if you just create a new tier one residential and production buildings when they are needed. Imagine the picturesque scene when landing at the harbour and taking a ride through beautiful rural outskirts, while your eyes slowly focus on the impressive skyline covered in smoking chimneys on the horizon.

While Schnaps is an early and more simple production chain, the potato farms take part in refining the rural look of your outskirts.

Help us to fill the blanks!
With the next DevBlog in our big residential tier series, we will take you on a trip to the sooth-blackened worker districts, a new class of citizens, which should change our society forever. But before we end today’s blog, we have a special request to all Anno Union members.

We are currently missing a public building, which fits the rural lifestyle of our farmer tier. While we have some interesting ideas, we are curious what ideas the Union could bring to the table.
What do farmers actually do after a hard day working on the field and what would help them to advance to the next level? Maybe there is a specific infrastructure, which every farming village should have? We are looking forward to your suggestions for the missing tier 1 public building!