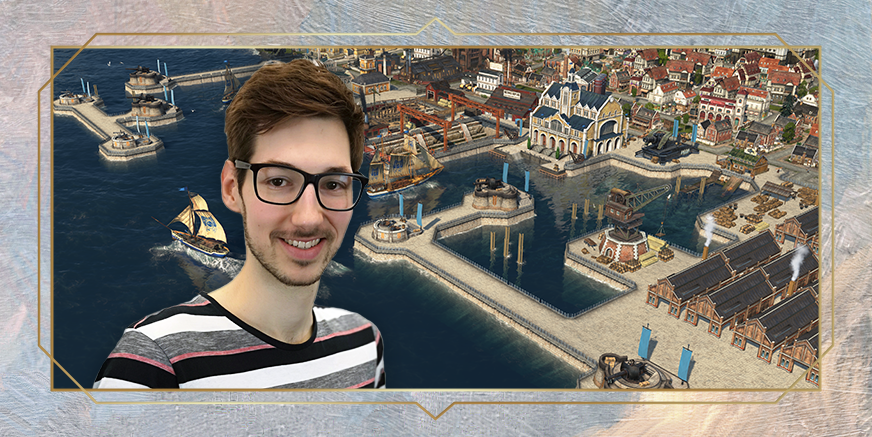 Hello Anno fans! My name is Erwin, and I work on the game design of Anno 1800. As a player myself, I have a fairly competitive mindset. I love attempting to gain an edge over other players or the AI where I can, especially when I am given the freedom in how I gain this edge. For this reason, I am very excited to talk to you today about a new feature we are introducing with Anno 1800: Influence!

Anno is many things to many different players: it’s a city builder, an economic simulation, tense naval engagements against both human and AI opponents- and that is only scratching the surface in terms of Anno’s unique gameplay mix.
Anno players love to tinker around with all these features, creating their own strategies, tactics and setting their own challenges for themselves through various handicaps. What goals will you set for yourselves? Will you attract more residents than anyone else? Do you plan to exploit your workers and production lines to their fullest? Or maybe you will reach just one more company level before it is time to go to bed? And if all else is too easy for you, you can of course always stack the deck against yourself with a crazy challenging map and game setup.

Tying into this freedom of choosing your own playstyle and what challenges you want to tackle is the Influence system. With this feature, we want to both challenge grizzled veterans who are looking for interesting new ways to play, while helping to ease new players into the complex gameplay systems of the age of industrialization. It also encourages and incentivizes players to experiment with different gameplay styles, adding to the game’s overall replayability (which is a high priority for the team).

Influence: A resource that defines your playstyle
Influence is a new global resource, which you can invest depending on your playstyle, for example by raising the production limits on certain buildings or units. This allows players to go all in on certain aspects of the game. Do you have ambitions of becoming a feared warmonger, fielding the largest fleet of mighty dreadnaughts the world has ever seen? You can- just be prepared that you will not be as successful a trader as another player will who instead choses to focus his influence in that area.

When setting the initial construction limits for buildings and units, we take the community feedback we have seen on the Anno Union and our forums into account. It is important that you as the player should never feel too restricted, even if you chose to invest all of your influence in just one area. That is why you will be able to dabble on all areas of the game a little bit; it is only after you reach a certain threshold that you will need to invest influence points. The goal here is clear: the system should feel empowering to the player, asking them to make interesting gameplay decisions without feeling too restricted.

When you start a new match, you will have a set amount of influence that will slowly grow over time as your company level increases. A familiar system for many Anno players, the company level is a representation of the players overall success, determined by the total population of residents on your islands. So whether it is growing your main island or expanding across the world, the growth of your empire will provide you will additional influence that you can invest.

Unlike gold, influence as a currency does not deplete; it is instead a pool of available points that you can allocate freely in the various categories. Think of it as an investment: If for example your trade fleet is not delivering results as hoped, you can remove some of the influence used by it and instead allocate it in another area such as harbor defenses. With this kind if freedom, it is also crucial that players never feel punished for making “the wrong choice”. It also adds a lot of dynamics and meta-narrative to your games, allowing you to react to aggressive moves by an AI opponent or the unpredictable actions for your human multiplayer opponents.

Investing influence in a certain category will grant you titles, which both work to help other’s in the game known what they are facing (someone with a military title is likely not planning to keep things entirely peaceful) and to provide you with useful global buffs.

How it all works in the game

By now, you are probably very curious of how the system works during the moment to moment gameplay. As discussed, you will be able to freely use your available influence points in a variety of categories, each of which is related to and supporting a different kind of playstyle.

Currently, we are planning to have six such categories: Propaganda, Trade, Military Power, Optimization, Culture, and Expansion. However, please keep in mind that the feature is still heavily under development and everything might be subject to change, as we try to allow interesting customization options while still keeping categories meaningful and not convoluted.

On a base level, investing Influence points in one category allows you to expand your building, unit, and module limit. But here comes the catch: If you spend enough influence in one category, such as 50% of all your points, you will get a global buff, which additionally empowers and enhances your playstyle. We also want to support hybrid playstyles, which would allow you to not only rely on one big global buff but also give you the option to split influence on different categories to gain several smaller bonuses. That opens the gates for really interesting strategic combinations.

To give you an idea, investing in Optimization will allow you to expand your public building limit, which is currently three buildings. By investing points, you can easily add many additional items to your guildhalls and harbor offices to optimize your economy further. If you invest the majority of your points into optimization, the title granted will further buff the effectiveness of your public buildings. Investing in Expansion will allow you to settle on more islands and affects the amount of routes you can create to move your workforce between settlements.

A giant armada or enough public buildings to boost your whole city
The categories themselves are also divided into different sections. For the Military category, you can either spend influence to expand the maximum number of warships or defensive structures. This allows some interesting combinations; for example if you spend all your influence on warships, you will not only be able to create a huge fleet but your global buff will make your ships even more powerful. On the flipside, it would leave your islands defenseless apart from these ships, as you would need to rely on a smaller number of coastal defenses. You could also split it up equally, allowing you a decent fleet of ships and strong harbor defensed. Alternatively, you just invest a crazy amount of points into military defense or split it with other categories, to be able to defend yourself while also optimizing your economy. As you see, completely specializing makes you a force to be reckoned with, but cleverly splitting your investment on the various categories makes you a true jack of all traits.

Culture will allow you to invest in projects like the zoo, which will allow you to increase the number of modules and push your attractiveness when you spent enough points to benefit from the global buff. To give you a better idea what we are talking about in numbers, we are currently planning with around 10 free modules before investing influence. We think that this is a high enough number to allow players to create a varied and great looking zoo; if however you want to create an entire zoo island with dozens of modules (“Welcome to Anno Park”, anyone?), you should be able to do this with your influence. And before you ask: Ornamental structures will be free, as we think that the space they take up on your island is investment enough.

Influence becomes more and more relevant, especially during the end game of an Anno 1800 match. However, Influence is not limited to expanding unit or building limitations.
Propaganda will allow you to influence and manipulate the populace in various ways. But as it is tied to another new feature, we cannot talk about it in detail right now. We think that this additional new feature deserves its own dedicated DevBlog further down the road.

So what do you think?
Influence is still heavily work in progress, so the balancing is of course still far from final. However, the Anno Union will come in handy to balance the game, especially some of your larger future focus tests.
We are looking forward to your feedback about the new Influence feature, so let us know in the comments below!