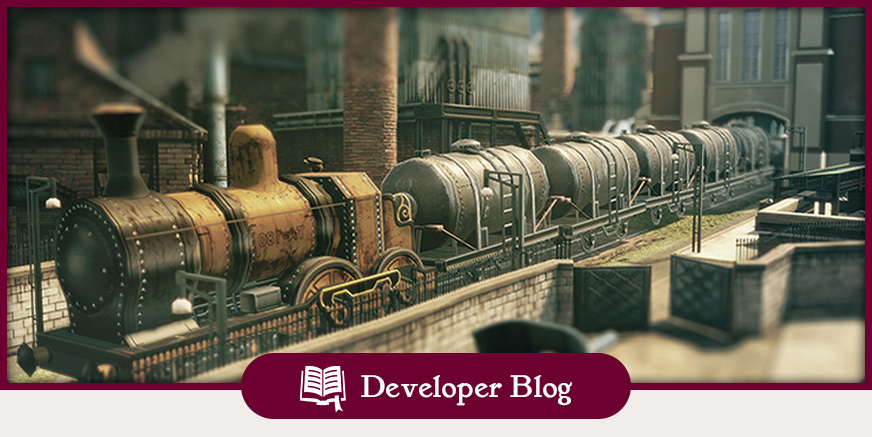 Driven by the ever-present urge of territorial expansion, Anno 1800 will see you venturing forth to claim new islands, expand your industrial machine and grow your population. Your once scenic rural hamlet will grow into an impressive metropolis, bringing with it all the challenges of managing dozens of complex production chains at once. Thankfully, if you are feeling a little adventurous (or always strive for perfection), there is one wonder of the modern age that may come in handy: electricity!

Power for the new age
Upon reaching the fourth residential tier, the future suddenly becomes reality, as your first power plants start boosting your industry and giving you a significant advantage over your competition. Once connected to your factories and other modern production buildings, electricity will significantly buff your productivity, which will allow you to grow your cities without losing crucial building space needed for your residents or to expand your trading empire. Thanks to this breakthrough, a smaller production island could quickly turn into an industrial powerhouse, being able to provide the majority of resources to supply your main island. 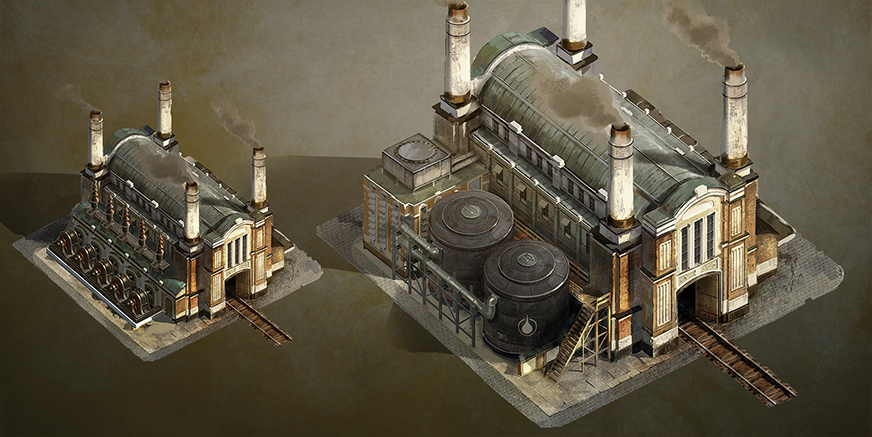 Storing electricity and transporting power over long distance was a song of the future back then, which means that your power plant will provide electricity on a radius based on street distance. All factories and craft business can benefit from a connection to the local power plant, while farm buildings (such as the pig or grain farm) will not receive a boost from electrical power.
While electricity can boost the outcome of your older production buildings significantly, some modern facilities will require a connection to your electrical network to begin operation.

To drive home the atmosphere of this brave new world, electricity will also be visualized in the game world, with electrical poles on your streets showing you which areas are connected to your electrical network. With boost up to 200%, the cart pushers of old will not be able to handle the higher demand for production relevant material to keep the machines running. To solve that issue, boosted production buildings will swap their old horse carts for modern steam powered contraptions and the UI of connected buildings will undergo significant changes as well:

Get things rollin! Not all assets are final.

But not only modern factories are hungry for power, your dear investor friends will have a serious chat with you at the country club if you are not providing their modern city mansions with electricity. They obviously cannot be bothered taking care of the logistics of establishing electrical supply to an apartment district in a 19th century metropolis, but they are certain that you are up for the task. 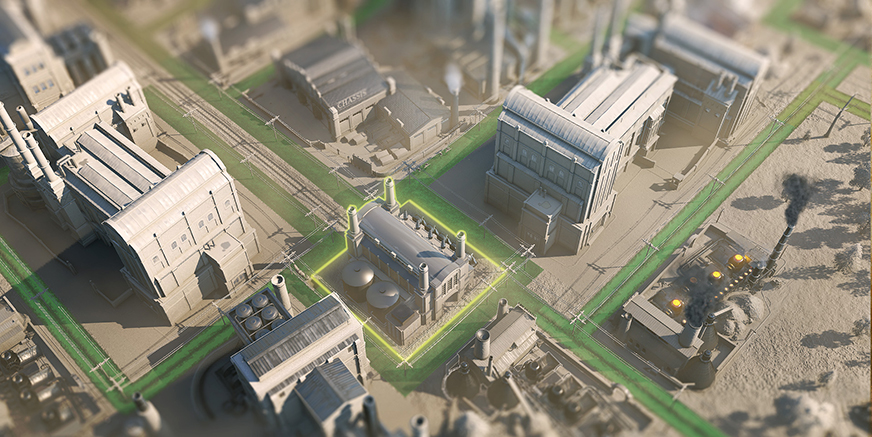 Many assets and visual feedback are still a work in progress but we are looking forward to show you the system in action!

Running the electricity business
While power plants are an incredibly effective tool to boost your production, they are also fairly challenging to operate. The trick is that your power plant runs on fossil fuel, and its hunger for oil is not to be taken lightly. Refineries, which extract the fossil fuel from natural deposits, can provide the huge amount of oil needed to run your power plant – but that still leaves the question of how you transport all this oil! 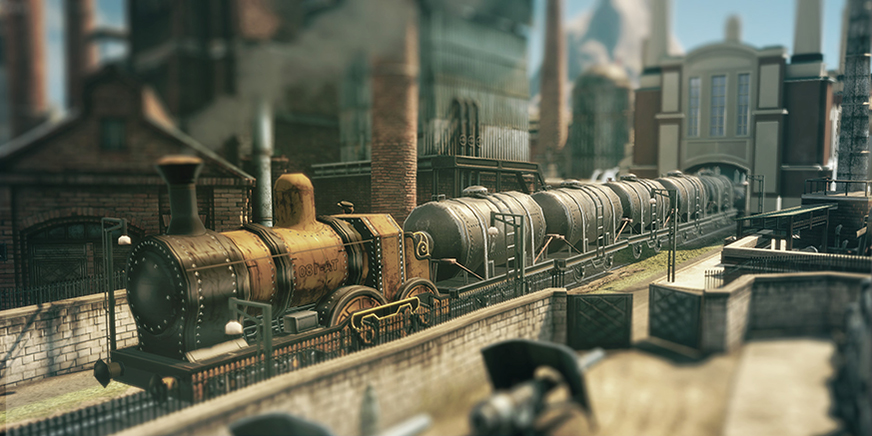 In order to support large parts of your city with electricity, you will need to pave the way for the train to transport tons of fuel across your island.

This is where the oil harbor comes into play, giving your tankers an opportunity to unload and store all the oil coming into your production islands. But you still need to get it from the harbor to the power plants, right?

The industrial revolution lead to an incredible demand for resources and materials, creating a logistical challenge impossible that called for  modern solutions. Enter stage left: the railway, the trusted iron horse powering the advances of the 19th century!

The train will load the fuel from your harbor to transport them to any connected power plants on the island. Of course, that means that you have to connect your oil harbor to your power plant via railway tracks to get things moving. Depending on your islands layout, this can pose an interesting challenge in itself, making sure that all power plants are connected to the harbor (or an oil field, assuming you were lucky enough to have one on this island).

Establishing an efficient supply line is therefore by no means a trivial task, from finding and tapping oil reserves, putting all the needed workforce in place to the logistics of getting it all to the power plants near the factories you want to power with electricity. This is where good predictive building of your industrial districts pays off, ensuring that you can group your factories efficiently to ensure that as many of them as possible benefit from your power plants. 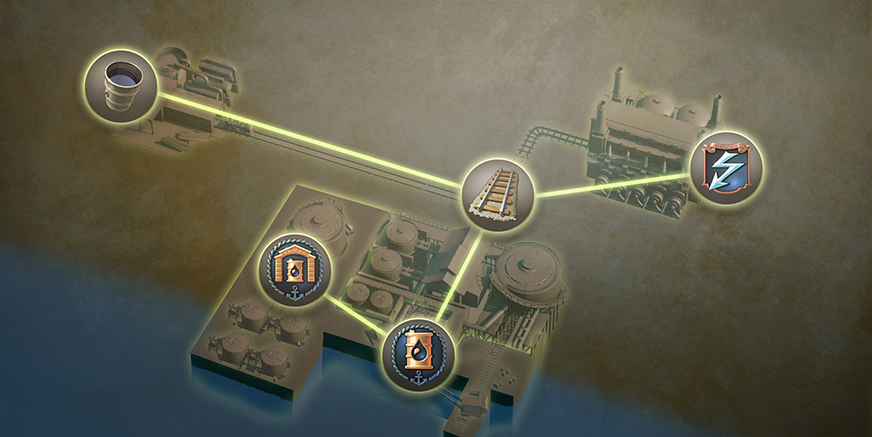 This diagram gives you an overview about the logistical network required to support a power plant.

A new century on the horizon.
During development of these features, we closely followed the many creative and passionate community discussions revolving around the railway. Because of that, we wanted to create a meaningful endgame feature for Annoholics who want to optimize their economy as well as for enthusiasts who want to experience technology advance alongside society.

Together with features like our item system or Influence, electricity allows for a level of customization and strategic gameplay rarely seen in the Anno series. Imagine dense industrial districts powered by electricity, further boosted by items and Influence specializations. A feature, which also greatly benefitted from our Anno Union play testers, as their feedback helped to shape and improve the system.

We are eager to hear your opinion, so feel free to share your feedback on the new electricity feature in the comments below!