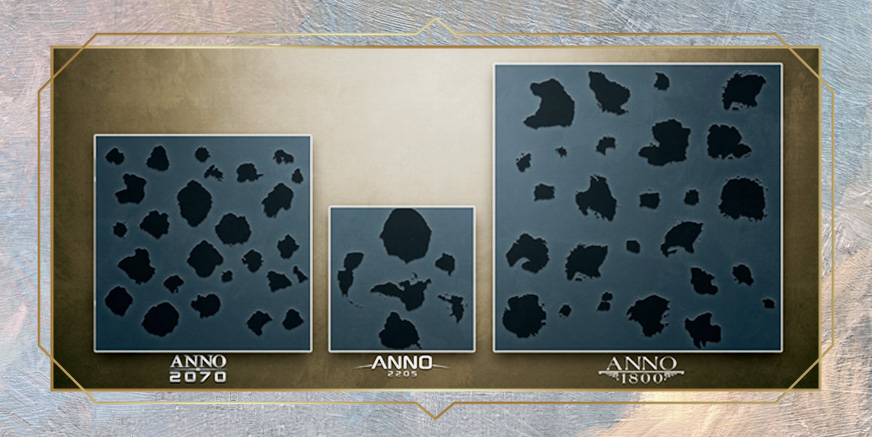 Time to get serious! As previously announced, we want to use the Anno Union to give you more insights into various aspects of Anno 1800. Starting things off is our Creative Director Dirk Riegert, who has been working on the series since the Anno 1701 days. In today’s extensive DevBlog, he will explain a core aspect of our new game: the multisession gameplay.

Our entire team is following the comments and feedback on the Anno Union with great interest and that of course includes myself. One topic that I keep coming across during my evening reading that many of you seem to have questions about is the so-called multisession gameplay. As we had always planned to start our proper DevBlogs with a meaty subject, this seemed like a perfect candidate to do so.

To be fully able to appreciate the changes we made to the system in Anno 1800, we first have to circle back a bit. Multisession gameplay is a fairly new element for the Anno series, as it was first introduced with our last game Anno 2205. This allowed players to connect several separate worlds (called “sessions”), and to transfer goods between them. Our goal for it was to create a larger, persistent game world while combining various different maps (in the case of 2205 for example, Earth and Moon). At the basic level, we were pretty happy with this new feature as it offered us many new game design possibilities. Moreover, players seemed to like it as well, voting the multisession gameplay as one of their favorite new elements of 2205 (alongside the ability to move buildings and production modules).

How can we go further?

Despite all that, our post-mortem analysis of Anno 2205 also showed us that there were many avenues where we could go even further to improve the multisession gameplay beyond that game’s implementation, as the expansion of the game across several sessions had some big implications. We identified four main parts that we wanted to address to ensure that the multisession gameplay fully met our expectations.

To spoil the good news- we have made major improvements to each one of these aspects. So read on for much more details how we achieved this.

A question of freedom

The gameplay freedom to do as you please within the provided systems has been a core pillar of the Anno philosophy since we started with 1602. However, the multisession gameplay implementation in Anno 2205 did not fully deliver on this, as players were quickly required to settle in additional sessions to progress in the game. While it was possible to stay in your first session for as long as you wanted, this effectively limited your game progress. This lead to some players feeling limited in their ability to play Anno the way they want to, including the option of moving to additional sessions at their own pace (or not at all, even).

One session? Multiple sessions? It is up to you!

By comparison, the multisession gameplay in Anno 1800 is a lot more flexible. From a certain point on, players will be able to decide if they want to move to a new session. We know that exploration and that sense of discovery it instils are important aspects for some of our players, so we want to allow you relatively early on to set out and discover not only new islands, but also new sessions.

But there are also those players who prefer a “my home is my castle” approach, and who are more reluctant to move beyond their home island. These players prefer to make the move to another session much later in the game, once they feel fully familiar and comfortable with the gameplay. Allowing this flexibility is important for us with Anno 1800.

We are even going further to allow for those players who would prefer to only play on their starting map, as we aim to make the move to a second session entirely optional. We expect that the vast majority of players will spread out after a certain point to fully experience the full breadth of gameplay, but we will enable players to stick to their home session by focusing on trade to acquire other goods. As a side note, we currently plan to limit the classic multiplayer experience to one large session for 2-4 players.

Size matters after all

Fully understanding our goals for the multisession gameplay requires us to dive a bit into hard numbers. Staying forever in on one map is all nice and dandy- but only if it delivers the intended gameplay fantasy. For example, while the individual islands in Anno 2205 were much bigger than in previous Anno games, the maps were in turn much smaller. To see a concrete example, take a look at this graph, showing the respective to scale sizes of the game worlds in Anno 2070 (comparable to Anno 1404), Anno 2205 and our plans for Anno 1800.

For those of you hoping (or maybe fearing) that this means that the game world has also proportionally grown, we present this next graph, which shows the distribution of islands you can build on in the world. Whereas Anno 2070 offered around 25 islands per map, Anno 2205 reduced the number to five islands on average (we made some post-release changes with free patches and DLCs). With Anno 1800, we are going back to an island count that is more comparable to 2070 and 1404, offering up to 4 players (be they human or AI) enough space to advance to the highest civilization level. The reason that the world is comparatively bigger is that we have increased the size of the islands (especially your starting islands) to allow for more buildings, mountains that are more impressive and our huge monument. Thanks to these changes, each session should offer players enough space to for a full-fledged Anno experience. Which begs the question why we are even bringing back sessions? I am glad you asked!

Similarly to how the fantasy of settling on the Moon drove the decision for the multisession gameplay in Anno 2205, our new setting in the age of industrialization and imperialism will also benefit from allowing players to move beyond their home map. We consider the players first session as kind of a home base, where their capital city will be located, and where they meets their allies and foes. After taking roots there, they are free to spread out and extend their area of influence to other regions.

Thanks to the inclusion of the multisession gameplay, we are not limited to your stating session when it comes to breathing life into the game world. After all, what proper empire would be limited to just one map?

On the other hand, we don’t want players to have to spread themselves too thin across to many sessions, leading to constant switching between them as could be the case in Anno 2205. This is why we will be very careful with the introduction of additional sessions. Our current plan is that we will offer a second big session beyond our stating map at launch. Here we are following the notion that sometimes less is more. This especially the case as (as explained above) the individual sessions are far larger and offer more gameplay than they did in 2205.

And while our restraint when it comes to the number of initial sessions is primarily driven by gameplay considerations, it comes with some has technical benefits. We were able to minimize the loading times between sessions, as they are simulated in parallel (after an initial load when you start).

The integrity of the game world

The last point of focus when it comes to improving the multisession gameplay in 1800 is the integrity of gameplay. This was an issue in 2205 as some of the typical Anno elements did not come together in a satisfying away, which sis something that we aim to rectify with 1800.

For example, there was a lack of immersion when it came to the transportation of goods, as they were not really transported from A to B, and rather managed via abstract balance sheets. To fit into the world of the 19th century, all goods in Anno 1800 once again exist as physical items that need to be transported between locations. This happens with the classic carts on the islands, and of course with ships when it comes to transportation between islands. And we are paying a lot of attention to the changes that happened to shipping during the industrialization, as time is an important factor during shipping. And not just between islands, but of course all when sending your transport ships between different sessions.

Also, contrary to Anno 2205, military engagements are no longer taking place in special “event sessions”. They are once again part of the main session in Anno 1800. How exactly these engagements work and what role multisession gameplay has there is however a topic for another DevBlog.

What do you think?

Now that I have spent two and a half hours typing up this in-depth answer to all of your questions regarding the multisession gameplay, it is your turn- we want your feedback!

This this DevBog help you to get a clearer picture of where we are headed with Anno 1800? What sounds most exciting to you, and what aspects of the multisession gameplay are you worried about? Would you personally prefer to stick to your home session, or are you more interested in exploring to world to its fullest? We look forward to reading your thoughts and ideas.

Thanks and until next time,