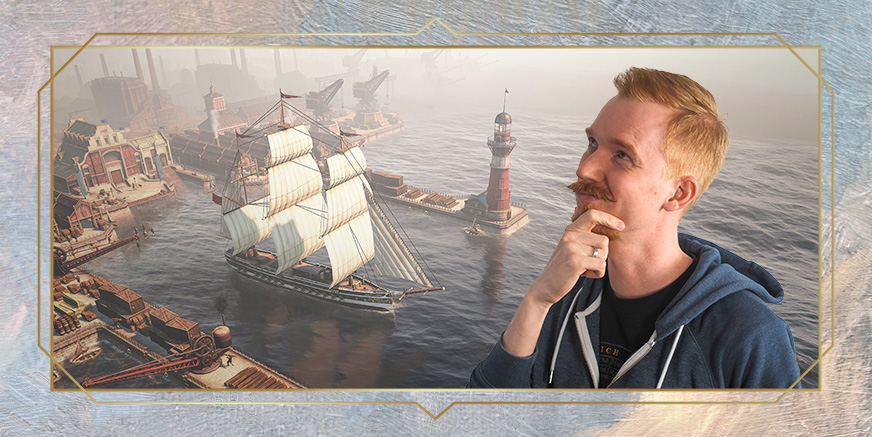 DevBlog: Your own trading empire

Hi, my name is Sebastian and I am one of the Game Designers for Anno 1800. I have been part of the Anno Team since about two and a half years now and today I want to share some information with you on something we have been working on for a while now, the trade routes!

More than just a city builder, Anno 1800 is also a game about growing a small settlement to a real economic empire. Over the course of the game, the needs of your capital island will raise and you are in charge to fuel your hungry industry and fulfill the demands of your citizens.
Your main island can be a demanding beast and at some point, you have to expand to other islands to support your advancing metropole or to buy needed goods from other characters.
With trade routes, you can connect your islands with a transport network to ensure a steady flow of resources.

Here an example familiar to most Anno veterans:
“These pesky citizens! It seems whatever you do, they always ask for more and not exactly in a polite manner.” To fulfill their demand for beer, we could rely on trading but we decide to get our own production going. Unfortunately, the needed hops does not want to grow on our island so we have to establish our beer production line on our outpost, which is located on a nearby island. Of course, you do not want to order your ships back and forth manually, so you setup a trade route to ship the harvested hop or even the brewed beer over automatically. The beer will flow and hopefully make them happy for at least a while.

As you know, we want to bring back more complex features to the next title in the series. Instead of the more recent and simpler iteration of the trade routes, you will be able to make use of two different systems this time. One for the players who like to modify, tinker and optimize their routes for maximum efficiency and another one for simpler and faster but potentially less efficient routes.

Trade Routes
Let’s start with the more complex system. As this one is much closer to the ones from 1701, 1404 and 2070 you could call it the “classic trade route system”.
It allows you to transport goods between your islands or to trade with other parties automatically.

To give you an idea about the complexity of the system, here is an overview over most of the available options: You can freely set stations and define which goods should be loaded and unloaded by your ships. You will again be able to assign multiple ships to a route and each of them will be able to transport multiple goods. There is no limitation to the amount of routes you can create. Of course, you can name your routes for better overview and for those who do not like to come up with route names themselves we implemented an automatic naming system that should give you an idea of what this route is doing. The routes overview will also display the most common goods transported by a route.

Here a design study, or so called mockup of the trading route feature. Not representative of the final version in the game.

With several ships following one route, you might encounter the situation that one first ship is fully loaded with goods at a harbor but there is not enough left to load the second one. Instead of leaving with an almost empty storage, you can order the ship to wait until the full amount of goods is loaded. Additionally if a ship arrives at the destination and wants to unload its cargo, but the harbor has no space to load up your ships delivery, you can command your vessel to throw stuff over board in order to make space for the goods you would like to load. These two options called “Wait until full” and “Throw overboard” – very creative, I know – can be configured for every station separately.

When creating your trade route, you trust your ships’ captains to find their way across the sea on their own. With no further instructions, your ships will naturally take the shortest route, which might be problematic as this does not factor in hostile areas or wind direction.
It might be an option to guard your ships against loot hungry pirates but maybe avoiding their territory might be the wiser strategy in the first place.
To account for this we will also bring back waypoints for routes. When two consecutive stations are assigned, the route automatically draws a line between them and the player can add and move a waypoint to change the path of the ships.

Visibility and complexity go hand in hand. The UI elements shown are not final.

None of this is limited to islands on your current session; you will be able to expand your trade routes to other sessions as well.
What we are aiming for is a complex system, which favors the freedom of the player. It can also be seen as a challenge for seasoned Anno and strategy player, as it brings room for error and mismanagement back into the game. However, sometimes even the most seasoned logistics expert needs a fast and easy solution to get things done to take care of other, more pressing matters.

For that, we added a second system to the game.

Charter Routes
If you know the routes system from 2205, the charter routes will sound familiar.
They are a much lighter system that allows you to rent ships in order to transport goods between your own islands. Easier to handle but also more limited than their big brother, they can only transport one type of good in one direction between two of your islands. This is one ship per route. The chartered trading ship cannot be controlled manually but can be attacked by opponents or other AI characters. Chartered ships also have higher upkeep costs than your own trading vessels – in the end the captains need to pay their crew and want to make some profit too. As a result, players who spend time creating their own routes save money and players who are in a rush or don’t care so much about the money can save time.

Here an early version of the charter route menu. Amount of items and general loading capacities in this blog are also not representative.

It’s your time to share!
Supporting your ever-growing cities is part of the fun and with these two systems, we want to give you the tools to create an impressive and world-spanning economic empire.

And with this matter at hand, I would love to know what kind of player you are. Are you a transport tycoon who builds a highly efficient transport network with trade routes? Are you willing to invest a bit more in charter routes in order to concentrate fully on your city planning? Or will you mix and match the systems as you like?