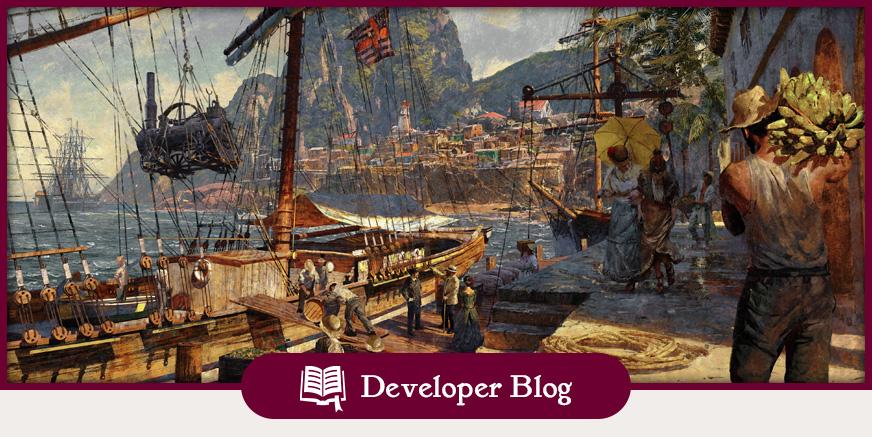 DevBlog: Welcome to the Jungle

Welcome to the New World
The idea of splitting the game world into the orient and occident quickly became a fan-favorite feature in Anno 1404. With Anno 2205, we expanded on the idea of different biomes and created the multi session system, which allowed us to ramp up the scale of Anno’s world with separate and vastly different new habitats to colonize. With Anno 1800, we will combine the best of these two worlds: a new biome and culture brimming with details on a large separate map on which your empire and your opponents can compete over new islands and resources. Welcome to the New World!

This new fascinating archipelago will both challenge your skills as a city planner and allow you to exciting new characters; who knows, you may even be able to help them in their struggle for independence as part of Anno 1800’s campaign! But keep in mind that characters from the Old World will also follow your new trade routes and bring your existing feuds or alliances into this lush new world.

This is the first DevBlog in a two-piece series, covering the “New World” session in Anno 1800. Today, we show you the scale of the second session including the setting and gameplay elements. In a future second blog, we will focus on the new production chains as well as the new residential tiers you will find on this new continent.

Enter the jungle – armed with square and compass
At the dawn of a new industrial era, which would eventually pave the way for our modern globalized world, people craved for anything new and rare from continents they’ve only heard of in their local newspapers. The rise of the working class and private entrepreneurs fueled not only a craving for luxurious goods but was also fertile soil for the curiosity first sowed during the Age of Enlightenment.

But getting your hands on goods like cotton, tobacco or precious gold is a bold venture, as your competitors never sleep, and the islands at the coasts of the new continent are covered in dense jungles interlaced with rivers and rocky ridges.

However, the New World will not only present a welcome visual change to the familiar European style environment of the Old World, as the second session will also spice up the gameplay with often challenging islands layouts. If you manage to establish your empire in an area, which seems inaccessible at first glance, you will be rewarded with a gorgeously scenic settlement surrounded by lush forests and colorful animals. 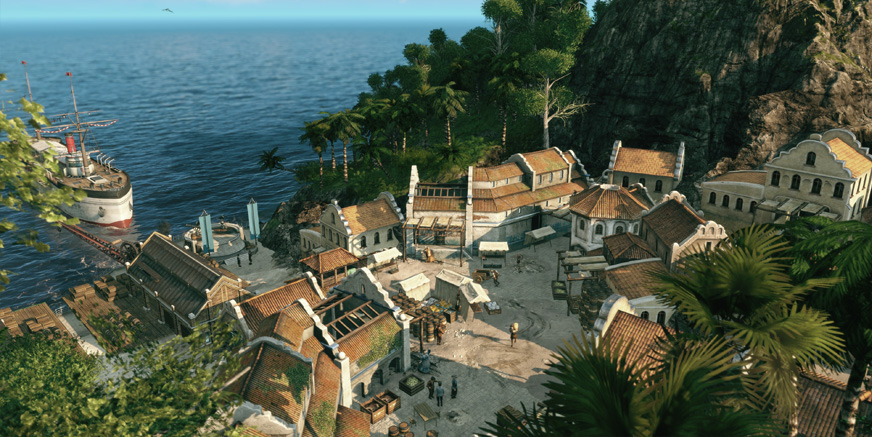 To immerse you in that completely different hemisphere, we created two new residential tiers (both of which come with unique production chains!), new characters to interact and new sets of flora and fauna, which will populate the densely covered islands.

The two residential tiers are inspired by 19th century South America, including unique portraits, visual feedback as well as new third party characters like Isabella Sarmento, who are coming with their own islands, storylines, and quests for players to undertake. And while we can’t go into this topic too much yet, we can tell that Isabella’s fight for independence will play a focal role in Anno 1800’s campaign.

Seamless multisession and world map
But how will it exactly work? As previously mentioned, the new session is the best of two worlds: the Anno 2205 multisession system and the visual and gameplay variety from Anno 1404’s orient and occident.

As soon as you reach tier 3 (Artisans) in the old world, a discovery mission for a new route to the New World will become available. After your brave crew manages to open the new trading route across the great ocean, you will be given free access the new session as you please – seamlessly and without lengthy loading times, which is something we had received a lot of feedback on.

From there on, you can jump back and forth, managing your empire in the Old World while changing to the New World in the blink of an eye to check on your newly established settlements.
When sending ships between both sessions, they will leave the map in real time before entering the world map, which allows you to keep track of your trading ships traveling between sessions or your expedition vessels on their way into unknown waters. When establishing trade routes between sessions, you also have to take into account that your ship will take some time to cross the ocean.

While the New World will offer exciting new production chains, you can decide for yourself when and with how much dedication you want to tackle this new adventure. AI opponents of the Old World will follow your new trade route but will not discover it by themselves. That means that you can decide when it is time to branch out without being afraid that you are too late to the party. Then it is up to you if you want to spread your empire extensively into the new territory or if you just want to establish a small romantic settlement to stay in contact with local characters.
Many new Third Party characters are eager to trade their new goods with you, naturally, and for a price reflecting their considerable expenditures. But word is that Madame Kahina in the Old World has extensive contacts to the new continent and might strike a deal with you if you need some of the goods from these far away lads.

Especially your higher tier residents in the Old World love to get their hands on luxurious goods from the second session while your residents in the new lands in turn favor imported goods from your first session. Furthermore, the New World will be the main source for oil, and a steady supply of the fossil fuel from the second session comes in handy when you want to run a big electricity business. But more about production chains and goods in the second part of the New World blog. 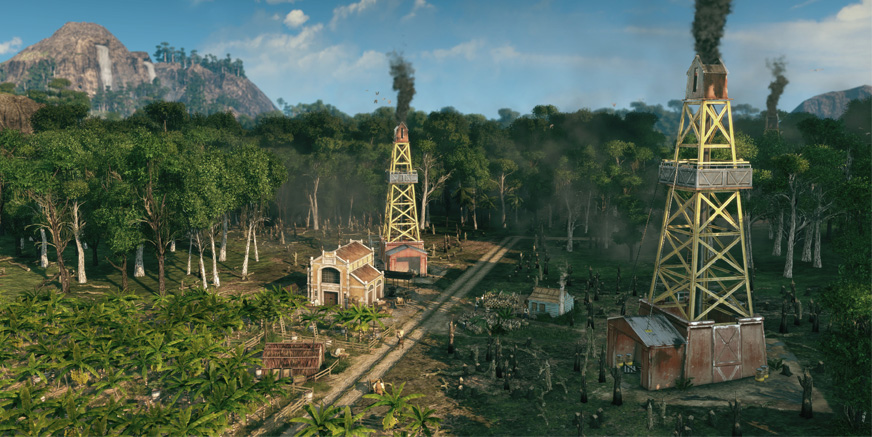 How your feedback influenced the New World
Now that we have revealed the New World, we can also tell you how player feedback was crucial into turning it into the version you will see at launch. Our initial concept for South America was very different and definitely smaller in scale, but the strong, constructive feedback from our Ann o union testers in our previous playtests convinced us to expand our plans for the New World significantly: a lush new world of challenging islands with two separate citizen tiers with all-new production chains. This has been a truly collaborative effort between our team and our playtesters, and we are grateful both to them, as well as to all the other Union members who shared their wishes and suggestions for the second session and its gameplay with us online.
And while we are on the topic of your feedback- we are happy to announce that after we put some additional work in, you will be able to access both sessions in your multiplayer matches, giving you and your competitors access to the full breadth of Anno 1800’s world when facing off.

In the next episode of our New World blog, we will show you the two residential tiers and their production chains in action. A lot of feedback and a great amount of work went into that feature and we hope that it will provide you with many hours of exciting new content. So what do you think? Let us know in the comments below!