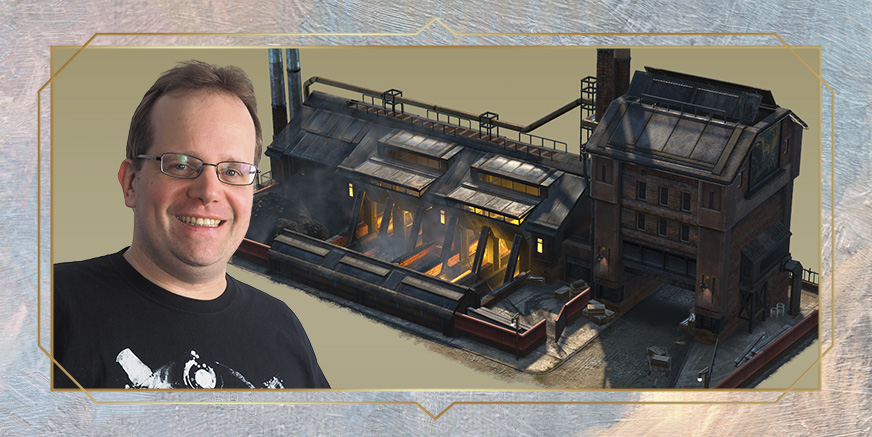 Hi, my name is Carsten Eckhardt and I am a senior 3D artist at Ubisoft Blue Byte Mainz. I am a part of the company for almost 15 years now and as a result, worked on almost all Anno titles in the past. My main responsibilities are 3D environment art (houses, terrain elements etc.).

Going from the initial idea and the first concept art up to the final version of a 3D asset can be a long and winding road. Developers across many disciplines are involved in that process in order to bring the brimming era of the industrial revolution to life in Anno 1800.

The last time, we invited you to watch and learn how our 3D designers work as digital architects, so this time we will add visual feedback and animations to breathe life into our future 19th century buildings.

Visual feedback
Do you remember the final version of the brick factory from the last 3D Art DevBlog? Well, sadly I have to break it to you that there are even further steps to take until it reaches the level of quality and the appropriate Anno feeling we want for our game.
Before we start to get things (literally!) moving, our building needs to get implemented into our game engine. This will add our object to the asset library, which enables us to place it in the game, block out clipping areas and add visual feedback such as actors, effects and much more. As soon as the building has been imported into the library, we can start adding visual feedback.

“Hold on”, you may say, “what exactly is visual feedback, and why do you keep talking about it?”
Visual feedback helps the player to have a better understanding what is currently going on in their metropolis while also making the game world more believable. While you can inform players about nearly every aspect of the game with contextual menus, actually seeing what is going on makes everything easier and faster to grasp, not to mention way more enjoyable to watch.
For Anno, it is not surprising that we make use of a lot of general and event based animations for the variety of buildings, such as moving steel kettles, smoking chimneys or special effects work like sparkling fire.

But it is not only for the sake of the atmosphere. As mentioned, visual feedback also gives you an indicator whether a building is currently productive, idling or affected by events like a blazing fire spreading through your residential district. For that, some buildings have different animation states. A factory as an example needs a state which defines if it is currently producing (workers being productive, machines working) and one where the factory is currently in idle state (effects like smoke and fire toned down or removed).

The BoB and Feedback editor
To create and modify the visual feedback elements, we developed our own tools internally, one with the thrilling name BoB (Bombastic Object Builder) and the other one rather pragmatically titled “Feedback Editor”. Originally developed for Anno 1701, the BoB’s main purpose is to block movable areas; it defines the space where units and actors (such as unloading carts or the workers of the building) can move as well as construction areas to ensure that buildings do not clip into each other (the size the unit needs on the construction grid). Furthermore, BoB allows us to place ornamental objects on existing assets in order to bring a bit more variation and life to them.

The feedback editor on the other hand allows us to give buildings feedback trigger to coordinate the movement sequences of units on the previously in BoB defined movable area.
If that sounds a little bit abstract for you, how about a small example: We all love the small stories we encounter when watching our city up close. If you observe your bakery, you can watch the baker going around minding his business, maybe even slacking off from work once a while. Or how about animals enjoying the day on a green meadow of a farm or even cat and dog chasing scene on the market place. Flying animals or other wildlife are an exception as they are not part of the eventful story we create for a specific building and more part of the actual game world.

Enough explanation, let’s see the system in action
Okay, I bet you have a pretty good understanding what we are talking about right now, so let’s start working. The first step is a straightforward process: in BoB, we define movable and inaccessible areas of the building, as we need to tell the engine on what area of the building units are allowed to move. Imagine that we paint the different parts and areas of a brick factory in different colors. The courtyard should be a movable area while we do not want that the workers clip through the walls or take a stroll on the rooftop.
The next step is to use the BoB to place effects, such as smoke for chimneys (hey we are in the industrial revolution; smoke galore!) and to place props like streetlights, crates and various kinds of vegetation.
Once done with that step, we have to define so called 3D selection areas, which ensures that players can actually target a building with a mouse click. A small, but important detail to keep in mind.

Here we define movable areas and use hitboxes as a blocker on our Pub asset.

But enough of BoB for now, it is time for the Feedback Editor to shine. Here, we first have to think about what kind of movement behavior for units would make sense for this specific building. There is for example a lot of lively stuff going on with the pub or the market place, such as a marching band, guests etc.
In case of a steel beam factory, it is more about bustling workers operating industrial machines.
That is the magic trick and crucial part of creating the crowded and lively feeling which Anno games are beloved and known for.
To catch your attention and keep you excited when you observe your industrial district, we want there to always be something exciting going on or that you can take a break while enjoying special eye catchers like the zoo or the crowded market place.
Quite some work can go into that process, and a building with many and complex units, such as the market place, can take a whole work day to finish. As we also we like to hide small details for the explorers out there, I strongly recommend to keep a keen eye on your city life.

Let’s make that a bit more random
As you all are familiar with Anno, you know that there is way more than one thing going on at a time and that there is a surprising variety of visual feedback. Our animations will not play out the same any time, due to the good portion of randomization parameter we add to a building. The Feedback editor also ensures that we have randomization in the movement areas going on, as we do not want the units doing the same stuff on the same spot repeatedly.
From the baker, the farmhands on the field or the innkeeper of a pub, the so called actors use a building as a stage to perform a show for the player. We can set variables how often an actor shows up, duration of their performance before they leaves, usually using a variation of a set path. An actor on the market place could enter the scene from the entrance of the market before leaving through a door or as a variation, entering the market hall. The movement of a unit or in this case an actor is usually defined by dummies or splines; imagine a variation of rails, which it can use to move through the scenery.

Final thoughts
As you can see, a lot of handiwork goes into that one building, from the previous steps from game design, concept art up to our 3D art team. We are now ready to let our asset lose on the world, the last final bits, like defining hit points and other game parameters is usually a job for our programming and game design team. While not every building you might see on the stream or clips has all its animation or even detail right now, all buildings get the same treatment for the release version of the game.

I hope that you enjoyed seeing the journey an Anno 1800 3D asset takes during its creation and I am curious about your most favorite visual feedback, from small stories going to animation from previous Anno titles.

The comment section is right below and shoot if you have any questions, as we might have the chance to answer some of them in an upcoming community QNA.