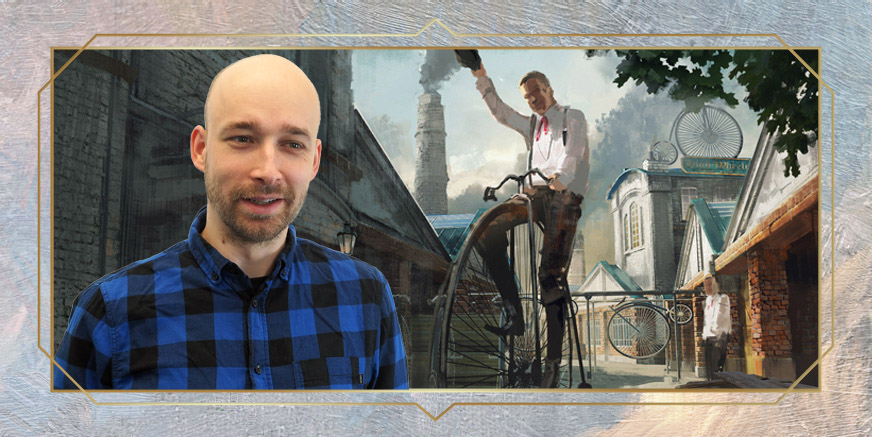 As previously announced, we want to use these DevBlogs to give the Anno Union community an opportunity to learn about various team members’ work, and some of the considerations going into it. For today’s entry, we have drafted our Game Writer Matt Cook to explain how Anno cares about history without being historically accurate:

Hi, I am Matt- Game Writer, former Brit turned European, and new to the Anno-Team. Welcome to my world! A world a bit like our own, but then, not quite…

A history in broad strokes

Anno’s world is a tongue-in-cheek celebration of mercantilism, in which time, place and identity blur. Yet we expect the game as a whole to define the 19th century as an era of industry, discovery and revolution.

Some of you wonder if real historical figures will appear in our game. The short answer is no. The long answer is that this has never been the Anno way. It shows how inspiring and evocative this era is however, that people have already come up with so many good suggestions for historic personalities they would like to see.

A matter of opinion of course, but I often find divergence from history, and anachronism jarring in games (unless of course this is a conscious choice) – and by parallel and parody, Anno has always sought to avoid this. For example, Napoleon and Queen Victoria will not appear in person in Anno 1800, but you may find their personalities and even their appearances very much alive there.

Playing Anno 1404 as part of my devilish indoctrination into the cult of Anno, I was struck by how close the AI personalities were to satire and caricature. I can’t help feeling Anno characters are at their best when they have that boldness, even if it means humor has realism by the throat.

Anno Character Characteristics
Take the characters in our recent poll; a blend of archetypal and specific people from the period. Somehow they are larger than life, while still remaining unique. I like them all, but the Occultist is my favorite. She really captures the spirit (!) of an era in which rationalism and romanticism meet. Think Verne, Shelley, Dickens and all the rest – Anno could touch upon the curious, the mysterious, even the supernatural – as well as the productive, grounded core we know and love.

I’d be very interested to hear in the comments how you feel about such possibilities, because 19th century people were fascinated by the unexplained. Keep in mind that “unexplained” is a key word. The intention with Anno is always to create a believable, substantial world based on (albeit cherry-picked) historical fact, and we would always be careful never to cross the line into fantasy. But think for example about the emergence of forms of entertainment such as stage conjuring, or how some claim to have caught fairies on photograph, or sailors returning from sea voyages with tall stories, and you get the general idea. How conservative or brave should we be?

A History of our own
Besides anything else, Anno has its own tradition when it comes to the setting: the recurring characters, like a reassuringly gentle Jorgensen in every iteration, or the different guises of our stalwart fish and ships over the years.

Perhaps Goldfurt was your best island ever. Perhaps Lord Richard Northburgh was the sort of person you’d hope to meet in a world as dark and cruel as 1404. Anno has every reason to remain true to itself, and some of that history will not be lost or forgotten in Anno 1800.

Anno: A study.
But does all this “vagueness” about history mean that we aren’t meticulous about detail? Of course not. You can’t create any kind of world (ask any writer worth their salt) if you fail to research your inspiration, which when coupled with imagination, creates a tangible and plausible sense of place. The labor movement, the industrial revolution and other sweeping changes the world witnessed in this remarkable century, are already a huge part of the game.

In our researches at the Mainz studio, we also profit from a collaboration with our colleagues around Ubisoft, who are helping us to steep the game in real history. Alongside the detailed visuals, we believe the atmosphere and narrative will have those with an interest in the period smiling sagely at all the little references, as their picturesque settlements become vibrant metropolises.

So what do you imagine?
As a writer, I am curious as to what ideas the era conjures up for you. What was your first thought on seeing the announcement of Anno 1800? Which event, theme or even personality was your first association for the 19th century? I am looking forward to your comments, and indeed to talking with you all again in the near future.