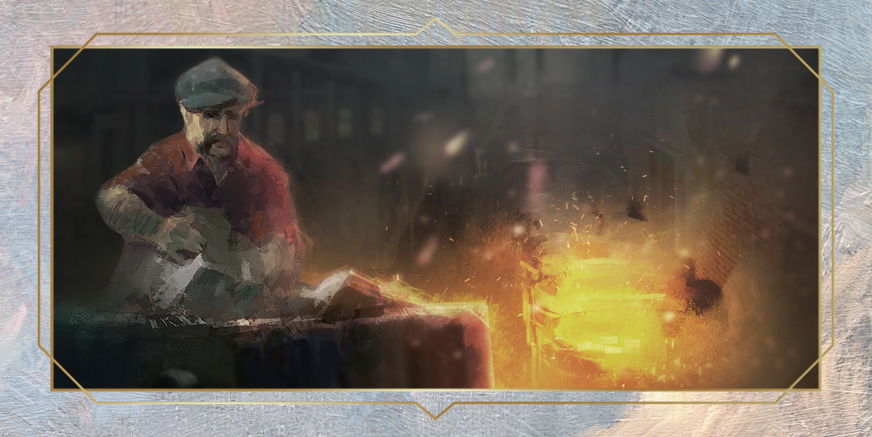 DevBlog: The Rise of the Working Class

The 19th century worker. Downtrodden, disillusioned and outspoken. Each a dormant volcano ready to spout its hot lava of protest, to unite a single luminous trickle with the molten flow – a flow of discontent that threatens to devour all in its path until it becomes the nigh-unstoppable fire-tide of revolution!

However, thankfully in ANNO 1800, it doesn’t always have to be like that.

The industrial revolution brought horrific working conditions – endless days (and nights), clogged lungs and limb-inhaling machines – woes enough to make anyone violent. But perhaps you happen to be the one employer enlightened enough to lift the burden, to be the humanitarian, the progressive.

Or perhaps, preferring to play the role of an unscrupulous taskmaster, you will indulge the worker’s proclivity for vice. Feed their demon, and they’re likely to forget any complaint right there and then. A greasy bit of grub unwrapped, a bottle unstoppered – anything to numb them to the miseries of the working day. Your reward for conferring such iniquitous mercies? The kind of loyalty not easily come by, your name celebrated by market hawkers and urchins alike.

Depiction of the working class
Previous historical Anno games had their distinctive art style but it was the advent of the working class which changed the urban life drastically. While the hard work in modern factories was demanding and exhausting, it also enabled families a safe income.
There was also a need to accommodate the thousands of new workers in your city and so new suburbs were born. On the one hand, you had small and crowded flats in large apartment buildings as a reality of that time. On the other hand, suburban worker districts attracted country folk to the city, giving the second residential tier a distinctive look and feel.

As you can see in the picture, the housing plots allow us to add many small details to tell their inhabitants stories, from various objects, textures up to animations and visual feedback. Compared to the romantic cottages of the countryside, these buildings are full of pep and fighting spirit, much like the workers themselves.

And hard labour it was, working long days in steel factories while being exposed to the heat from glowing smelters, we should not forget that it was their commitment and dedication which would form our modern society. While their fuliginous clothes are functional, the workers should still transmit that sense of solidarity and pride. Workers have a chirpy and fun-loving nature – they are an outgoing and outspoken bunch, with a sense of solidarity, pride and dignity that is truly remarkable given the circumstances.

A future forged out of thousand fires
With the first workers moving into your settlement, you will get access to numerous new production chains. Ring the bell of the industrial revolution, when you dig deep into the earth to excavate needed resources to build your first factories. Reaching residential tier II will feel like the push into a new century, as the first rather simple productions unfold more and more to complex chains. This groundwork, such as from molten iron manufactured steel-beams, will be an important material for many other future production chains from higher residential tiers. That way, no matter how much you advance, workers will stay as important to supply your industry as farmers providing food and other rural goods.

While factories forge modern marvels, their size and smoking chimneys might not be the beautiful vista for visitors and residents who want to enjoy the beauty of your city. It marks also the turning point of your first city expansion when you have to decide where to construct your production districts and where you want to place your worker suburbs. Just placing a few factories for your basic needs won’t be enough anymore, when you thrive for a bigger city and start to engage other factions in trade contracts or conquer new territory.

Here the Anno 1800 gameplay will open up: alongside factories, further production chains and expanding demands will add complexity and the shipyard will allow you to explore, expand and engage the world around you. Naturally fitting with growing needs and the capability to expand your territory, fertilities will start to have an impact on your overall strategy. Workers will always play an important part during that expansion and it will be up to you to decide how your world will remember you: are you willing to exploit your people to leave the competition behind or do you refuse to build an empire on the back of your workers?

You decide how your society evolves
However you decide to run your empire, we want that you have all strategic options at hand while the world should react to your actions. Changing your working conditions selfishly or even to your residents favour will have different benefits and drawbacks. As an important part in the history of the working class, we will explore the working conditions in the next part of this DevBlog series, when we show you how your decisions can elevate your empire or push your people to the limit.

Are you looking forward to build huge industrial districts in the outskirts or do you see smelting furnaces and factories as a part of your cityscape which grows together with your living quarters and economy?