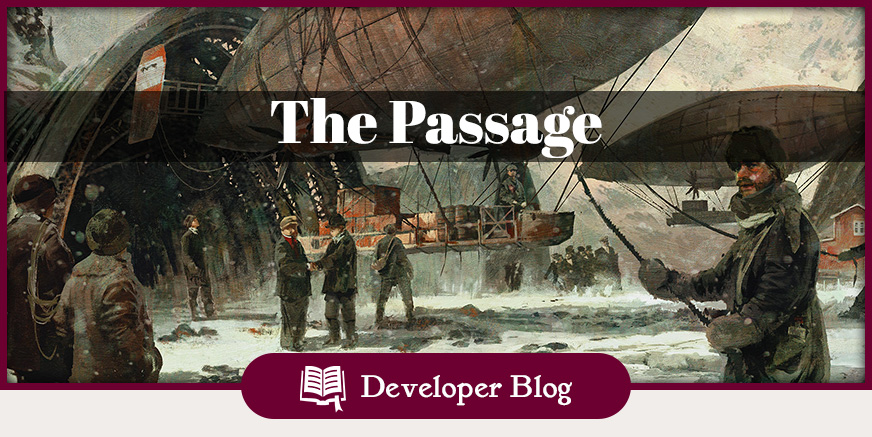 Dearest Elaine,
I’ve few breaths left. I die never having found a Passage, but then no glory awaits any servant of Sir John. He was certain the ice would not thicken around us in Spring. Fate of expedition now rests on circumnavigation of Terrier Island by short, perilous west shore, or by long, open east channel— fear I know what Sir John will prefer.
Farewell my Elaine.

The frozen north, a final frontier many felt it was their destiny to conquer, whether in the name of science, or for fame and riches. The “Northwest Passage” was a fabled sea route through the Arctic that promised to connect opposite sides of the Northern Hemisphere, conferring great wealth upon anyone brave enough to take an expedition deep into the ice.

From lush jungles to the frozen wastes – A chilling change of scenery
Our third and biggest Season Pass DLC, “The Passage,” tells a story of bravery and hardship, inspired by the valiant souls who risked their life in the name of progress, and tasks you to establish an outpost in the Arctic Circle. The sight of the eerie and beautiful wilderness invites everyone to follow in the footsteps of the Arctic explorers of the 19th century, while seasoned Anno players can look forward to an exciting challenge with a worthy payoff at the end.

The Arctic biome is a welcome change to the milder climate of the Old World and the hot and humid islands in the New World. Frozen shores under a dark sky, this barren wasteland allows us to tell a different kind of tale than you might be used to in Anno 1800™, and the harsh weather conditions offer interesting new gameplay elements. Our goal was that conquering the Arctic session should be an exciting endeavor as it will require you to rethink your strategies, away from raising big cities to carefully maintaining an outpost in a seemingly hostile environment.

The new campaign chapter of The Passagewill send you on a rescue missionof an Arctic expedition. Inspired by the events of the Franklin Expedition, searching for Sir John and his crew will unfold a dramatic series of events with an unclear outcome.

We need to keep our people warm – managing an Arctic outpost
With much potential for striking visuals and room for interesting gameplay additions, we knew that the Arctic biome would be a perfect opportunity to play around with new gameplay mechanics. The new region should be an exciting adventure for everyone but a true challenge for achievers who want to conquer the wasteland in order to reap significant rewards.

Harsh weather conditions are your dire enemy in the north and the new heating mechanic will challenge you to rethink the way you used to create layouts in order to keep your residents warm and healthy. The two new residential tiers, explorers and technicians, are audacious adventurers who, in the name of progress, turned their back to the amenities and comfort of the modern city life.

While their population needs reflect rather pragmatic necessities, the wasteful luxury goods got replaced by the much more urgent need for heat. Residential buildings as well as production facilities need to be connected to a heat source to function properly, with the new category of goods providing additional ways of keeping your residents warm and heathy.
The new heaters serve here as the foundation, radiators which allow you to provide a basic level of heat for every building in the vicinity. Like the electric power plant, it automatically places heat pipes along the street network, and thus is relying on street distance rather than a radius. But as its effectiveness is limited, maintaining and expanding your outpost becomes a jigsaw puzzle of proper space and heat management.

The Northern Hemisphere is an icy wasteland, and construction space, as well as basic resources, are sparse. Heaters operate by burning coal, which is hard to come by and requires you to construct charcoal kilns in the sparsely populated woods on islands located on the south or to import coal from the Old World all the way back to your Arctic outpost.
New goods such as sleeping bags or parkas will provide an additional source of comfort and thus let the heat meter rise. If you won’t be able to connect buildings to a heater, or if your fuel support falters, goods can provide a sufficient level of heat depending how well you can or want to supply your Arctic residents.
But with decreasing temperatures, the risk for a dreaded disease rises: The Arctic Flu.
Similar to the illness in the Old World at first glance, the Arctic Flu is a much more dire opponent for your residents due to the harsh living conditions in the North. It spreads faster, is more resilient and has the potential to not only paralyze your fickle northern infrastructure but will also take its toll on your Arctic population. So keep your toes warm to avoid a nasty surprise in the morning.

Adapted to the permafrost – new buildings and production chains
Other than constructing heaters,your outpost will give you access to several new buildings and production chains adapted to the life up north.
The Ranger Station will not only keep an eye out for fires in your outpost, it also provides medical support for your sick explorers, while the Canteen serves as a social gathering hub but also replaces the marketplace by issuing food and other goods. The Post Office is a new cultural need, allowing your researchers to stay in contact with their friends and families back home.
Population needs are as pragmatic as the fight against the freezing temperatures. To support your researchers with a steady supply of jerky, hunting cabins send out rangers to hunt for caribous, whale oil fuels your brass lamps and bear and seal pelts allow you to produce parkas and sleeping bags. But it is hard to survive up there without help from the Old World, and you will need to import canned food provisions and, as you can imagine, Arctic explorers don’t like if their schnapps flask runs dry.

To keep things going, your technicians found a new way of transportation for your snow-covered streets: the husky sled. Your trusty four-legged companions serve not only as a need for your technicians, they also provide satisfying visual feedback in your outpost.
Over time, your outpost will grow, and what seems like a barren wasteland for us is called home by others. The Inuit, a new third-party trader, are willing to trade when your stock runs low, as well as offer a variety of new items especially useful in the Northern Hemisphere.

As soon as you overcome the struggle and the daily life on the ice becomes normality, you will find that the Arctic also has plenty to offer. The North can become a profitable hunting ground for precious pelts
and there are some especially rich gold deposits, which promise a more efficient supply of the rare metal than your mines in the New World. You will also be able to collect new sets for your museum and your zoo to allow your residents back home to get a grasp of this strange and wild place.

But you are not alone, as news about the natural resources spread quickly and as such, second-party characters will follow you on your path into the Passage to start their own settlements.

Conquering the sky – the Airship Hangar
For the ones overcoming the challenges of the hostile environment, a big payoff awaits: the Airship!
Inspired by actual historical efforts to building zeppelins in the Arctic to avoid the brash ice, the Airship Hangar is the new monument coming with The Passage.
Building this technical marvel will be a huge undertaking, as it requires you to import a lot of construction material from your larger cities in the South in order to finish the four construction stages of the monument. Once you finish the Airship Hangar, of which you will be able to build one in every Arctic settlement, you can start to construct your first airship.

Airships are the ultimate endgame vessel for your trade routes, but they are costly to construct. It not only takes a long time to build one, you also need a new resource to fill their balloons during construction: gas. While your old companion Nate happily supports your first prototype with a shipment of gas, the resource itself exists only in the northern region of the Arctic: to be precise, on barren ice cliffs.
Without any real beach for ships to land, and missing any fundamental resources to construct a settlement, these islands are out of reach for any traditional vessel. If you dream of your own fleet of airships, you must claim the icy cliffs and establish your mining outposts with the help of an airbridge.

Airships can safely avoid pirates, and can take direct routes just over islands instead of slowly maneuvering around them. They have also a total of 4 cargo and 2 item slots. However, they are also more strongly affected by wind, and their unloading and loading process naturally takes more time than with a traditional ship.

But airships are not the only new addition to optimize your endgame logistics. Once transported into the Old World, the gas comes in handy if you build one of the new progressive gas powerplants. More effective than their oil-running cousins, the gas powerplant can operate without relying on trains to constantly feed their burners. If you can establish a trade route ensuring a steady supply of gas, the new powerplant can free up important space in your metropolis. But beware: as the gas is a rare resource, you probably must make tough decisions where it makes most sense to replace your old oil plants.

And while talking about technical progress, your scientific endeavors inspired our old friend Nate to work in new inventions, which will expand the crafting list for items you are not limited to use in the Arctic session.

An adventure of epic proportion awaits
The Passage is not only our biggest DLC yet, it is also a true passion project from the team. From the atmosphere, to the details to the amount of content coming with the final Season Pass content, we are eager to see how you like our adventure into the frozen wilds. With hundreds of Union members playtesting the content, it is also a true community project and shows how much influence you continue to have on Anno 1800 and its extended content.

Our third Season Pass DLC, The Passage, will release December 10th along with Game Update 6. The Passage expands the content of Anno 1800 with:
– A new Arctic gameplay session
– Rescue Sir Johns crew in a new story chapter for Anno 1800
– 2 new Residential Tiers: the Explorers and the Technicians
– 32 new Buildings, 7 new production chains and 13 new production goods
– Over 60 new quests
– Fight the cold with the new heating systems
– Construct your airship trade fleet in the new Airship Hangar monument