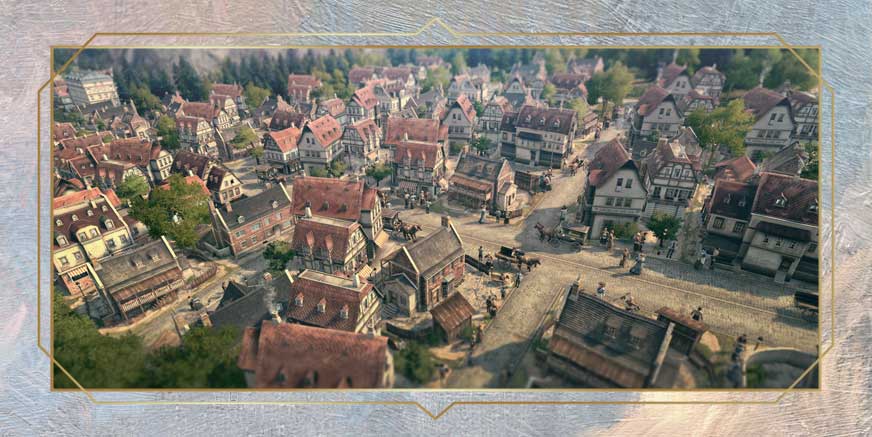 In most games, progression usually means acquiring new skills for your persona, raising stats and expanding your arsenal. In Anno, your residents are at the heart of gameplay progression, as levelling up your population gives you access to a growing catalogue of new buildings and opens up new and more complex production chains. Your city will advance through an era of change and wonders, while you improve your own management skills to become a masterful city-builder.

With this series of DevBlogs, we put the residential tiers and their gameplay role for Anno 1800 into the spotlight. Making the start are Game Designer Christian Schneider and Lead Artist Manuel Reinher, introducing the fundamental ideas behind Anno’s residents.

Residential Tiers, our progression system – Christian
Anno’s core gameplay idea is the concept of “fulfillments of needs”, where you have to provide the infrastructure and amenities for your citizens in order to advance. Residential tiers also work as a threshold, which determines how far you have progressed in the game, similar to the character’s levels in other games.
Reaching the next tier is a rewarding milestone, giving you access to a variety of new buildings to construct advanced production chains. Similarly to your production, your society will advance with each level and their demands will become harder to fulfill – a natural difficulty curve.
Your population serves also as an indicator of your skill as an Anno player. If you just advance in a new tier, only a few basic buildings will be available to kick off your new production but as the amount of residents in a specific class rises, more and more buildings will become available.

In Anno, every single building has not only a distinctive visual character; it also has its own gameplay aspect and interface elements. Buildings of each tier become a tool for environmental storytelling: you click on a tier home and the farmer tells a story from his daily life, and public buildings like the market become a stage for visual feedback.
From a gameplay perspective, public buildings play an especially important role, as they are the center of your attention. Their influence on your city district is an important gameplay indicator, which leads players to have a close eye on your pub and other public buildings. Because of their influence, city districts are often built around a center of public buildings and other eye-catching constructions.

There is also an important change for Anno veterans out there: every citizen tier has its own workforce type, which is required to run the specific production buildings of that tier. If you think about it, it makes sense: farmers take care of rural production, while the working class was born out of the demand from factories for specialized workers. That means that you have to make sure that sufficient workforce of a specific tier is available to run the production of said tier. This change provides a new layer of complexity when designing and managing your city and results in a way more interesting and natural cityscape.

An era of change and our artistic vision – Manuel
When cities grew to metropoles and workshops became factories, our society changed drastically. While aristocrats still fought over colonies in the backrooms of glamourous palaces, the new working class would go on to become the foundation of our modern society. For Anno 1800, the depiction of the century and especially the evolution of classes and society as a whole are important aspects of our artistic vision.

Every new match in Anno 1800 will be a romantic journey through history, starting with the beginning of the industrial age all the way to the end of the 19th century.

Every house, public and even production building for each tier should convey a certain character, and their design should be our way of telling the story of the people of that era. Every single tier is a specific snapshot of a different class and with that, shows how society advanced during the industrial age. A lot of thought went into the different buildings and subsequent events to represent their residential tier properly. Farmers and agriculture where still important during that time but they stood as a remnant of an old age. Their houses are not streamlined by modern pragmatic architecture, allowing them to have a personal touch while you will also able be able to notice that progress is coming to a halt for their production buildings. To support the working class on the other hand, cities needed to make accommodations quickly available and the modern city life changed personality and habits.

At first, your lower tier settlement has a more natural but less structured look and over time, as order and structure will find their way in the metropolis you are aspiring for.
That is the special rewarding feeling of an Anno game, when watching how through your hard work, a small farming village becomes a large city with beautiful higher tier districts, impressive factories and stunning cultural buildings.

Not only the 3D models, the right palette of color and material also defines look and feeling of a tier.

The Anno Puzzle – Manuel and Christian
During the industrial revolution, cities grew larger and architecture adapted in order to accommodate the masses of citizens who needed to work in the growing factories. Modern technologies like assembly conveyors pushed mass production, while steel beams allowed factories and other buildings to expand, and that changed the urban environment drastically.
Residential buildings take up space on your island and with that, compete with your production lines over available space. This creates the classic Anno puzzle: how much space is available and how do I allocate it? To represent the setting properly, we realized that things have to get bigger for a proper representation of that era. In Anno 2205, residential buildings where mostly 3×3, 5×5 or 6×6 depending on your citizen tier and region. While the 6×6 fields in Anno 2205 made it easier for us to create organic cityscapes, it limited the amount of buildings a player could place.
In Anno 1800, islands will be bigger and can hold more assets compared to previous titles. With all residential buildings now consuming only 3×3 tiles, it allows you to not only ramp up the amount buildings you can create significantly, it also enables us to make use of bigger production buildings. To fit the style of that era, we wanted these factories to be clearly bigger in size than other buildings; your modern production districts should be impressive feats of city design and modern architecture.

The beginning of a series of blogs
The residential tiers are a substantial part of Anno’s atmosphere, artistic design and gameplay created with passion and love for the franchise and setting. But we won’t just close the book on that topic, stay tuned as we get even more into detail and showcase the different tiers with their historical background, design and their production chains.

How important is the depiction of that era and the detail work, which goes into the different tiers, for you? We are curious how our take on that setting resonates with you and if you like the changes to the classic Anno formula to add challenge and give your city a more natural and realistic look.