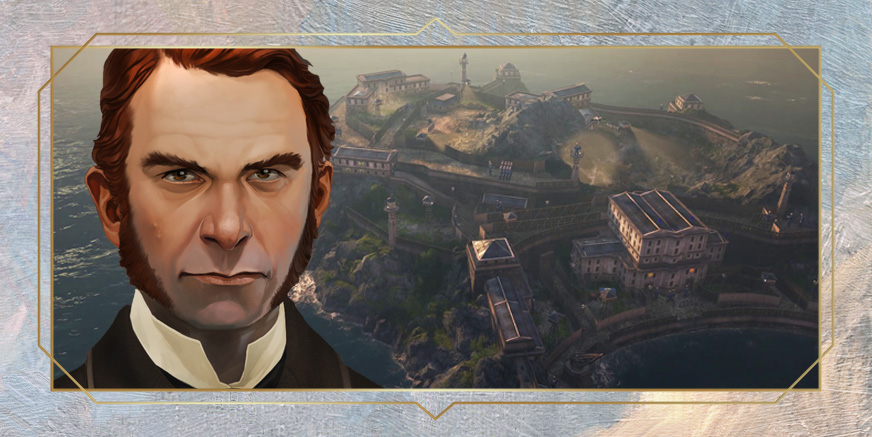 Hope is the most coveted, yet rarest of goods on the dreary rock called Wormways Prison, home for the worst of the worst. And of course for those unfortunate souls who dared to question or defy the absolutely authority of its warden, Eli Bleakworth. He is equal parts cruel taskmaster and calculating bookkeeper, mercilessly ruling his godforsaken rock under the dutiful guise of a faithful servant of the empire.

Eli Bleakworth, the Governor of Wormway Prison is just one part of our diverse cast of supporting third party characters in Anno 1800. He might style himself a dutiful servant, but the truth is that his honor and compassion have long since withered away, alongside his youth. Beneath his lawful façade, he secretly enjoys his power over his prisoners. After all, they would not be on his island if they were not scum that defied the empire’s laws, would they.

Introduced with Anno 1701, third parties quickly became an integral part of the Anno series. The feature has come a long way since then; what started as a collection of free traders has turned into a varied cast of important characters that breathe color and life into the world of Anno 1800. While they are neither direct allies nor competitors, they are an important part of the look and feel of the game world, and offer a variety of gameplay options and challenges.

The role of Wormway Prison in Anno 1800 – Atmosphere / Gameplay
His prison is not only an atmospheric snapshot of the more unruly and hapless elements of 19th century society; the island also offers different gameplay opportunities to the player. For starters, it is not just a prison, but also a business made profitable by its barely existent employment cost. Every day, under a merciless ocean sun, the prisoners toil in the island’s coalmines. Coal is in high demand during the industrial revolution and Eli offers a quick solution for the hungry blast furnaces of your factories.

But there is not only profit, there are also dependencies. Labor might be cheap on Wormway Island, but it’s Governor still need to provide basic good such as food and soap for his involuntary workers. Players should always look out if specific goods are in high demand by AI characters, as trade for sought-after goods might be the better bargain than paying in cold hard cash to bunker coal.

You could also overhear the prison guards mumbling about some their employer’s special interests, which might come in handy if you want to strike a good deal with the Governor.

The island is not only a great location to fill your trading ships’ holds with coal; Eli is also always on the lookout for business partners who are willing to lend the empire a hand in matters of the highest importance. If you decide to help him with his chores, he will provide you with a variety of rewarding bounty quests. There is always demand for work as the gatekeeper, but during challenging times like these, even hell itself can get overcrowded. It is worthwhile to visit his island occasionally to see whether Eli might be willing to restore the freedom of one of his special guests- always contingent, of course, on your willingness to pay their bond, as well as a paltry fee for his corrective services. Gameplay freedom is a core pillar of Anno 1800, so third-party characters present one opportunity where players that are less interested in luring tourists into their attractive cities can get their hands on some specialist characters. Who knows what kind of special talents one could acquire from the more or less guilty souls trapped in Wormways prison.