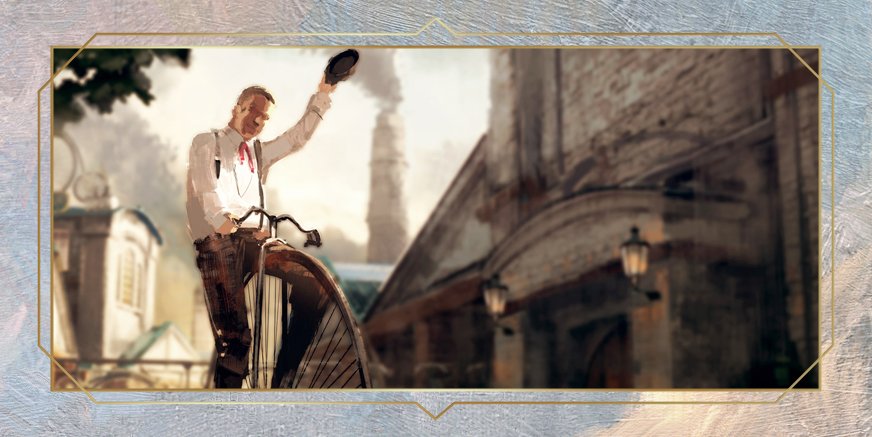 Head into your local coffee shop, the one with the vapers and twee chalkboards outside, and you might see a stressed-looking fellow dancing between customers, trying not to let his meticulously-managed coiffure and beard slip a pixel. Ask him for “just-any-tea”, and you may expect a look of disbelief, for this fellow is an Artisan, a perfectionist, and a romantic.

So indeed are Anno 1800’s Artisans. Flitting between on-the-knees despair and giddy delirium in the blink of an eye, they are the embodiment of romanticism in the 19th Century. It is distant dream-like idylls, wood nymphs, cherubs and the livid demons of purgatory from which they take their inspiration. Their work is art. More than the product of an education and practiced technique. So bound are they to their craft, they feel there is no choice but to pursue it, even if it means living in abject poverty.

And yet they have, for the moment, escaped that net. They have crawled up from the abyss – the world of cramped factories and back-breaking labour – and found some sense of dignity and freedom of expression. As a consequence, they are living out a contradiction – being eternally grateful while maintaining unreasonably high standards (for themselves as much as anything).

They are the middle class, the in-betweeners, those tugged in two directions. Mistreat them and they shall throw themselves into spiny thickets, please them, and they shall celebrate you like the god of a classical pantheon.

A design for the beautiful minds of the 19th century
Adept Craftsmen. Swinging middle-class. That sweet glimpse of prosperity for a commonality driven by their creativity. Artisans are aesthetes, their mind enabled by all the new possibilities at the dawn of a new age. But they are also aware that their success is built upon hard developed skills and techniques, not to forget their often underestimated capabilities of running a smart business. Their crafted goods are a marvel of modern techniques and materials, paired with their love for art and an incredible eye for detail. And as the new good middle-class, they build a bridge between the simple country-folk, working people and the aloof elite in their marble towers.

While the look on their face might appear presumptuous, their lifestyle does not come from an aristocratic legacy and their self-esteem surely not just from lucky inheritance. We wanted that the artful folk transmit that feeling of hard-earned skill and prestige, while still being rooted in the common folk rather than an elite build on aristocracy.

Their various crafts was on high demand in the modernizing society, and observing their portrait and other concepts of their character designs should tell that they are aware of that demand.
They demonstrate confidence but have also that skeptical look, wearing an apron during the day and a sassy jacket in the long nights, exploring exotic specialties or being on their quest for inspiration in the newly opened cabaret.

Artisans are expressive, playful and interested in anything exotic and new. They are intellectual and eccentric, but share a grounded nature – this all should show in their residential buildings. If you so will, their houses full of excitement for everything new in this century of wonder. After you spent the last tier creating your industrial backbone, reaching the third tier should feel like a reward for your eyes and represent all the new things awaiting the player.

Gameplay, a bouquet of possibilities
You can say that the first two tiers are still the early game portion of Anno 1800, as you establish the core infrastructure for your city. Unlocking the Artisans as the third residential tier starts the venture through the mid-game, where growing your city to a true metropolis will put your previously developed skills to the test and give you access to new features, which add complexity but also further strategic options.
The Artisans are an educated middle-class with a hunger for the wide world which results in more sophisticated and harder to fulfil needs. Goods become modern and exotic and we want to challenge the skill of the player with more intricate production chains.

The invention of steel beams allowed modern architecture to develop and strive but it was use of mass fabricated glass and ornate windows, which resulted in modern and visionary cityscapes. When reaching the third tier, glass windows get introduced as the new construction material and producing them will be a joint effort of all your workforce types.

With three different workforce tiers, which intertwine on complex production chains, you can now start to use the workforce system to its full potential. Boosting the output of specific productions can make the difference between an optimized industry and spacious production districts. Especially players who want to focus on trading can boost their workforce on specific parts of their production, in order to trade overhead while still giving your city the needed room to grow.
As more Artisans settle in your city, you will get access to more modern production and public buildings. That added complexity comes with new features and options, new tools to develop and support your own playstyle. Special buildings, items and other technical marvels will be able to boost your production, influencing your residence or raising the attractiveness of your city.

As the third tier is called Artisans for a reason, it surely cannot all revolve around industry and economy. It is the third tier where you can start to make a profit from the attractiveness of your city.
The beautiful minds among your residents will gladly share their craft to making your metropole more appealing and as a result, attracting visitors who gladly spend their dime on the attractions you provide. From ornamental decals or tackling impressive projects like the zoo, you start to have a significant impact on the look and feel of your city.

Plenty of new features on the horizon
Items to customize your playstyle or attracting visitors with big projects like the zoo is only a small teaser on many new features, which will have a significant impact on the gameplay. From planning, construction, modifying and acquiring the needed items, every one of them provides enough material for its own dedicated Devblog. With the introduction of the artisans, we opened the door to the wonders of a new and changing world and with upcoming articles; we will open more and more showrooms to cover the features in detail.
From all the mentioned new gameplay elements, what tickles you fancy? Do you want to know more about how beauty building and attractions create empower new playstyles, or how the modernization of your society provide new technology and ways to customize and boost your economy?