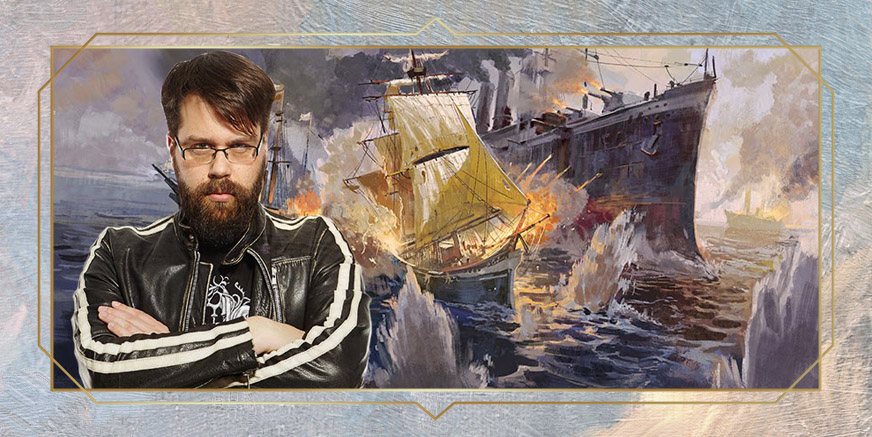 DevBlog: The Art of War II

With the first part of our The Art of War blog, we talked in detail about the military features in previous Anno titles. Today, it is time to give you insights into the military system in the upcoming Anno 1800. Creative Director Dirk Riegert will now give you a preview on what is to come for all the Anno commanders and strategists out there. Enjoy!

The 19th century gave Anno 1800 its name, and over the course of the game players will progress through the important milestones of this time; from the first and second industrial revolution up to the late 19th century, the golden age of Imperialism. The age of imperialism and industrialization provides many options for interesting gameplay possibilities as it was a time of progress, expansion and diplomacy. There is one overarching philosophy we follow for our upcoming Anno game: “You alone will decide, how the world shall remember you”.

You will be able to shape your own 19th century empire according to your own ideas and vision. In previous Anno titles, you could either cooperate with the AI or other players or destroy them with military force. With Anno 1404: Venice, we added the possibility to overtake opponent islands through economic domination, a possibility that fits perfectly into our 19th century setting- but with Anno 1800, we want to go even a step further!

Domination or destruction!
Until now, settlements on islands, which were either destroyed by military attacks or overtaken through economic power, were automatically cleansed of all structures and credited to the player. That will be still possible with Anno 1800, should you decide to assimilate all islands and totally annihilate every enemy presence on the map.

The shadow of war. Concept art for a heavy harbor fortification in Anno 1800.

However, the era of Imperialism has seen way more than just destructive warfare and we will provide you with an alternate way of solving conflicts. This solution is interesting for players, who want to dominate the game world but do not like the idea of being alone after they swept all AI from the borders of their empire. Instead of just destroying every trace of an enemy settlement, you will be able to annex conquered islands, which makes your former opponent a part of your empire. In this case, the island will pay tributes in form of tax and goods to the empire, while the island will remain under the control of the defeated party.

The following chart demonstrates the new ways of dealing with opposing parties. One example would be military domination to ensure higher income through tribute payments while the neutrality of the defeated islands remains intact. A great option for everyone who likes to bring enemy AI to its knees but does not want to be alone, surrounded by empty islands. That allows new strategic variants and interesting options for the late game of your expanded empire.

Variety of playstyles, whether it is domination or annihilation, military action or economic pressure: you decide!

Focus on naval warfare
With Anno 1800, we want to expand on the naval formula presented in Anno 2070 and add more complexity to sea battles. The 19th century marked the transition from the sail ship era and introduced steam powered vessels and battle ships, which allows us to put new cards on the table to expand strategies for naval encounters and navigation.

While the technical advancements of the industrial revolution lead the charge for many following technical inventions and wonders, it would be a bit too early to introduce air units. We know that back then, they experimented and partially used air balloons for reconnaissance missions and even bombardments, but it was more towards the beginning of the 20 century when humankind strived for more and began to rule the skies.

Naval battles between steam- and sailing ships are the core of our military feature, seen here in an early concept art.

So what about ground units? We had lengthy discussions in our team about the pros and cons of land-based combat, and as a result decided to skip ground units like infantry entirely. We are aware that the land combat system has its fans out there, who love to fight on foreign soil and who would like to see the return of infantry battalions and regiments. As Anno as a series is foremost about city building and management, skirmishes or full scale battles on the actual building zones always came with its drawbacks, such as units getting lost between buildings, as we explained in last week’s blog. A separation between the islands as building areas and the sea for warfare will ensure that both system can shine to their fullest potential.

You might remember the chart from our first military blog:

Land is for building; the sea is for trade and combat. Harbors are the intersection between both.

The idea is that players can plan their industrial areas and develop their cities to real metropolises without distraction, as military conflicts will be fought with naval forces clashing on the ocean. Harbors will play an important role here, as they connect the islands to each other and across the high seas to expand your empire. In order to take over an opposing island, you now have to gain control over the main harbor of the city. To defend these cities, harbor installations can be heavily fortified to defend against enemy attacks. The harbor system itself is worth talking about in more depth in a future DevBlog.

Trade routes will be also of significance, as you will need to ensure their protection during times of war when other empires try to bleed your economy dry by attacking convoys between your islands and sessions.

Always with the breeze
Our focus on naval battles will bring exciting skirmishes on the high seas for new players, while also introducing new options and additional complexity for veterans of the series, who like to engage in deep combat mechanics.

To give you a few examples, we are currently playing around with a new system that will cover the transition from wind to steam powered ships, provide you with special weapon types and allow you to bulk up your vessels with armor plating. We aim for a system that is easy to learn for beginners but hard to master for veterans who like to optimize and test out new tactics in warfare.
In this context, let us have a closer look on the wind feature. We created a short clip for you, where our dummy ships demonstrate the impact wind will have on a sailing ship versus a steam-powered vessel.

The new wind feature in the game will have an impact on navigation by sometimes changing wind direction. Thanks to the technological advancements of the time, steam ships will not be as affected by wind as their sail-powered counterparts are. However, you should not think that this means the inevitable end for traditional sailing ships, with their capability to use the wind to their advantage to quickly gain momentum and maneuverability. Your steam ships might even end up being outsmarted by an unexpected maneuver, or a change in wind direction.

That means that players who do not want to get too much into details will always have a noticeable benefit from constructing steamships. For veterans on the other hand, it is definitely worth it to have a closer look and to play around with different fleet constellations. It is possible that fast sailing ships, if they use strong winds to their advantage, can make an escape or achieve a tactical surprise turn to attack enemy battle ships with a barrage of light attacks.

Beside the new possibilities for actual naval battles, other military topics and strategies will have an important role in Anno 1800. As you will be able to threaten other parties in the game in order to bring them to heel, why not try threatening your neighbors with a largely non-existent army and a lot of hot air? What if AI sees through your bluff or even tries the same with you in order to appear stronger than they actually are?

There many important aspects of the military system in Anno 1800, where combat, diplomacy and trading are strongly connected and we are still playing around with some more ideas and possibilities.

One thing is set in stone: you will be able to decide between war and peace and give you the agency you want by choosing the AI difficulty, inviting other players or to alter the various difficulty settings when generating your world. It is your choice if you want to avoid warfare entirely as a peaceful city builder or if you are thirsty to wage wars across the isles. It is this player agency, which was always a staple of the series and which creates that special Anno feeling.

So what is next and what do you want to know more about?
The military system alone contains many more aspects, which we could explain in detail in future blogs in 2018. Is there something specific you want to know more about, such as how taking over enemy isles work? Shall we give the sea warfare another spotlight, where we dive deeper into weapons and other special features of naval battles? Let us know in the comments below, we are looking forward to your feedback.

See you next time,