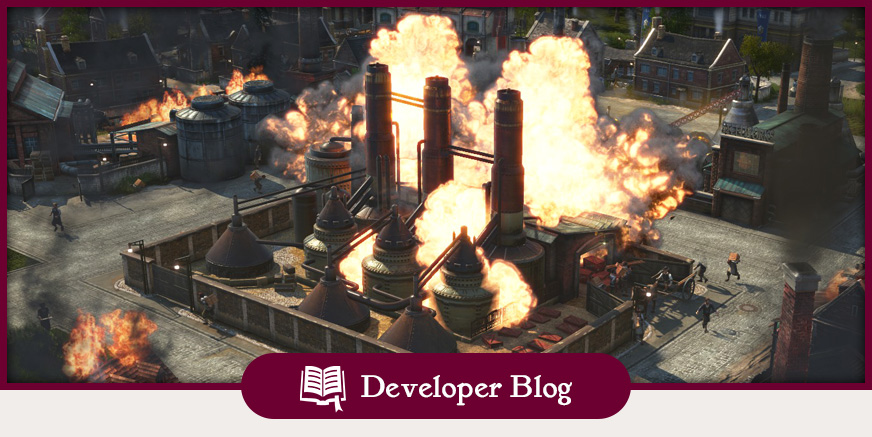 Working from dusk till dawn, skin tanned from the smoldering heat of molten steel, just enough time to swipe the sweat out of your eyes. The Baron demands his guns and there is no time to breathe or room for compassion. And in one misfortunate moment of exhaustion, a hand slips and the massive calciner first starts to sway, before seconds later, its scorching load burns its way through the factory.

Incidents such as blazing firestorms bring tension when managing a sprawling metropolis and they also mimic the realism of catastrophes which can throw life out of balance. You are the major in charge of the fate of your citizen, as you have to strike the balance between relentless progress and the glooming danger that one catastrophe might be enough to throw your city into chaos.

City Incidents in Anno 1800
For the seventh title in the series, we decided to expand on the city incidents from the fan favorite Anno 1404. The rule is that incidents can happen at any time while the likeliness is determined by several factors. Working conditions and happiness of your residents, as an example, affect the chance of a strike to happen while your heavy industrial districts have a higher risk of a fire breaking out. While every incident has its own chance of dying down on its own after a while, the chance of a fire spreading wildly through your streets is way more likely, especially in cramped residential districts.
You won’t be able to disable city incidents completely, as they are intertwined with different game systems, but if you like a more relaxed experience, you can turn the likeliness of them happen significantly down. Or if you like a real challenge, how about scaling them all the way up to the max?
In total, Anno 1800 will have three different types of city incidents to keep you on your toes.

Fire: Blazing heat and explosions, what’s not to like?
Fire is not only the most traditional incident, as firestorms eating through rooftops of a densely populated cities are a primal nightmare since mankind erected the first cities.
In older Anno titles, fire could only appear and spread in residential areas but now, they will be also able to attack your production buildings, with your modern factories especially being a welcome target for the flames. To expand that system further, different production chains have a higher chance of catching fire than others, representing the brutal industrial expansion and workshops growing to enormous factories.
A factor influencing the chance of a fire appearing are the working condition slider, as pushing your workers into overworking themselves might boost your productivity but also raise the chance of an unfortunate incident happening. An increasing problem during late game, as oil production chains and the electricity feature, which can boost some production above and beyond, provide great benefits but are a real safety hazard.
While other incidents such as sickness can spread even faster than fire, the flames are way faster in shutting down buildings, which means cutting you off from taxes and workforce from the affected area.

Wait a moment, you said….EXPLOSIONS?!
As fire isn’t enough of a hazard, there is now a chance for some production buildings to explode. Dynamite might be the best example, but every building which makes use of heavy machinery and chemicals can literally blow up. If a production buildings explodes, it will immediately put the building in ruined state but if that wasn’t enough of a problem, burning debris fly around and might set nearby buildings on fire. There are various factors for the likeliness of an explosion to happen:

Illness: Big city life
The chance of a sickness spreading through your cramped metropolis is affected by two elements, working conditions and pollution from nearby production buildings.
Different than fire, illness is targets only residential districts. This way, it will still affect your available workforce but you won’t need to build hospitals close to your factories.
Once a sickness breaks out, residents will stay home until they have recovered, which functions as a temporary de-buff to workforce and taxes provided.
But beware: in the overcrowded and sooth blackened cities of the 19th century, an illness can spread rather fast and you will probably never underestimate the danger of a outgrown plague ever again once it hit a large amount of your population. And if you thought your outposts or getaway islands are safe – sickness can even jump over to your or ships from other parties to spread across islands or even travel to another session.

Riots: The birth of the social movement!
The workers movement marched through the 19th century and was the most influential factor to change the society as we know it today. Riots can affect residential and production buildings of your city, although with a different reasons why people go on the streets or lay down their tools.
In residential areas, the chance of a riot is affected by the general happiness of your people while in production districts, working conditions are the biggest cause for a strike.
That means that if you overwork your people, they might stop working and go on a strike even if the folks in the residential area are happy and vice versa. It goes that far that it can even affect specific production chains as you are able to alter the working conditions for each production separately.
A strike can start small, just affecting one specific building but might erupt to a general strike which can cripple a whole type of production chain.
Strikes can further spread as people will gather together, shouting their demands and sprawling through the streets on the look for sympathizer and fellow comrades.
Don’t underestimate the frustration of the populous, when a situation goes out of control, a strike can become a grown movement including heated arguments, raising fists and Molotov cocktails.

City Institutions
Traditionally, there are ways to mitigate the situation or even to take immediate action, namely city institutions such as the fire brigade which will reduce the likeliness of a fire in their influence radius.

There are three different buildings for each incident (remember, explosions are a part of the fire incident): the fire brigade, the hospital and the police station.
The fire brigade is the first building to unlock, has a medium influence range but also don’t needs as much constructions space. You might want ensure that your residential as well as production facilities are covered by enough fire brigades or additionally boost their effect with specialists items in your city hall. The hospital has higher upkeep and construction cost, but makes up for it with a higher influence radius and a general lower chance of illness spreading compared to a fire.
To avoid strikes, you could become a man of the people or you can make sure that enough police force has a watchful eye on streets and neighborhoods. Police stations reduce the chance of a riot in residential and production areas and if things get out of hand (or you just prefer the stick rather than the carrot), you can mobilize your force to put the revolter in their place.

Keep in mind that similar to the transport of goods, the street distance affects the time a Red Cross volunteer or police cart needs to get to their place of action.

City institution have a limited amount of units which they can send out to fight the incidents. However, you can activate their ability to mobilize additional units in case of emergency: you can call happy residents into civil service, from Red Cross volunteers, neighborhood watch and civil firefighters.
Using that ability will spawn more of the specific healing unit and its cooldown is determined by the happiness of your population. Remember: Don’t count volunteers if people are too busy throwing eggs at your counterfeit, if your residents hate you, the cooldown will completely freeze.

Another interesting counter to incidents happening in your overcrowded late game metropolis and power economy are items, which you can slot in guild halls to either affect the likeliness of incidents happening in production buildings or specialists like very effective and renown police constables in your city hall to make your institutions more effective.

From riots to explosions, we build on the complexity of the incidents feature while working conditions or the use of items leave players the agency to let the benefits outweigh the risks or to minimize the chance of catastrophes to happen. What do you think of the new system and is the thrill of a full grown emergency situation part of the fun or do you prefer a more relaxed approach?