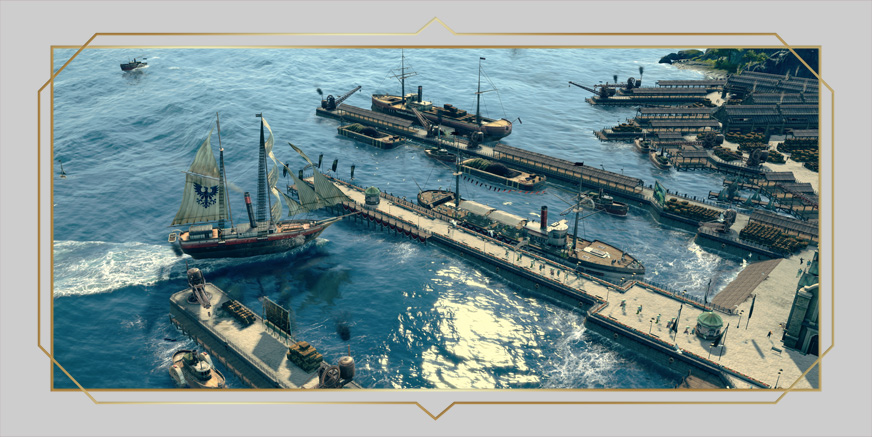 Welcome back to our newest Union Update, today with a short teaser about what’s to come before we move over to answer some of your burning questions.

Many of you answered our call for player created islands and your creative submissions have been in the center of internal discussions already. Some of you wondered if the map needs to be a digital drawing and if the use of a specific program is required. To clarify, you can submit a hand drawn map in form of a scan or uploaded photo. When it comes to format, we prefer .JPG or .PNG and the shape/color comparison is not mandatory, it just makes it easier for us to get a quicker idea of the design of your island.

You can find more information about the island creation contest here: https://anno-union.com/en/union-update-island-creation-contest/

We bet that most of you encountered various bugs in your gaming life, is a topic often discussed with passion in communities. For that reason, our QA team invites you to learn one or two things about quality assurance for Anno 1800. If you ever wondered how a QA team operates or how complex the game development really is, we will provide answers in our next DevBlog.
With the QA blog, the Behind the Scenes content will take a short break, as we want to highlight a few important game elements in the upcoming weeks. The look behind the scenes will return at a later stage and we can already tell that the Union gave us some cool ideas for future topics.

While we take about a short break, there is something called “Rosenmontag” in Germany, basically German carnival. As it seems that the folks around Mainz are really into it (and it is a bank holiday in our county), the usual Union Update will return February 19th.

Craftingfan
Hi, I would like to know if the game will have a diplomacy feature like the one in 1404. Itt was sad that you were not be able to form an alliance in 2070, as I am a fan of both titles.
Basti: Diplomacy will play a role in Anno 1800, an important feature that deserves its own dedicated Devblog, as interactions with NPC’s are a great tool to benefit the games complexity. Diplomacy ads not only another gameplay layer, it also encourages different playstyles and gives the cast of Anno 1800s AI depths to each’s unique character and quirks.

MattMcCorman
In 1602 and 1503, coastlines on islands were extremely long, you could place contors nearly anywhere – even several on one island in 1503.
With 1701, beaches became way shorter (okay, the oriental islands in 1404 had fairly long beach segments) and the new islands shown for 1800 had all short beach segments. Is there a reason for the limitation, such as technical restrains caused by the trade route system or gameplay reasons (challenges, landing military, island protection etc.)?

Basti: There are different factors that play a major role in our island design. Beaches play an important role in the actual gameplay. Limiting the amount of beaches for an island forces the player to think strategically, as the position of a harbor encourages establishing production districts to ensure an effective transport of goods. The amount of beach segments varies from isle to isle and as variety is important for us, many islands will haven even more than two of them. We have not shown many islands as of yet but we are confident that players will like the handcrafted set of distinctive islands Anno 1800 will have to offer. By the way, 1404’s biggest beach segments were roughly 50 grids in size, while Anno 1800 will have beaches with way over 100 grids and with that, allow you to build big and extensive harbors.
When it comes to level design, it allows us more visual variety for the coastlines similar to the uneven terrain on the island. If you look back on the islands in 1404, you will notice that the flat islands had only two design elements: mountains and beaches. With the use of cliffs, valleys, plateaus and other elements, we can create more natural looking limitations for Anno 1800.

DiruKamachi
How many faces, surfaces and polygons are used for an average map?
Are you allowed to tell us what kind of hardware you use? I am especially interested if you use several CPUs at once, what kind of video card and how much RAM you use.
Simon: That is actually hard to put in numbers. We make use of different techniques such as GPU-tessellation, which sends only rough squares (patches) to the GPU, which can further be broken down to triangles when viewed from a distance. That allows us to show every tiny detail from the 3D geometry close up while it uses the simpler triangles when zoomed out.
Regarding the hardware, we have workstations with different setups depending on the workspace. We make use of high performance CPUs with several cores, a lot of RAM (usually 64gig) and usually use high end gaming video cards rather than rendering cards.

Sabdrian
Is Ubisoft open for the idea to release a smaller, trimmed down version of anno 1800 for home consoles, such as the Nintendo Switch?
Basti: We want to concentrate on the PC version of Anno 1800, as it is the platform where Anno’s gameplay and complex features shine. We cannot say if there will other versions of the game in future as of yet. We want to invest all of our development energy in a great PC release version of the game.

Der3ine
Will it be possible to customize your player profile, as it was the case with Anno 2070 and other Anno games before? I am talking about player color, title, maybe starting ship or skins for different things in game?
Basti: Customization of your player profile hereby confirmed 😀
What kind of options and to what extend is something we could probably demonstrate best in a future stream.

Vernandes
How complex will the production chains be? I liked the complexity in Anno 1404, as it was hard to progress far into the game without getting bankrupt. Everything was expensive and the income was not exactly high. Taking the time to produce everything was the main driver for me. The difficulty level and complexity is something I would love to see in Anno 1800.
Achtarm124
How about a blog where you describe your approach to consumption of production chains which require at least two resources?
Basti: We do not want to spoil too much but after we talked about the many aspects of Anno 1800’s logistic system, we will tackle the civilization tiers and their production chains soon. With the next Anno, we want to provide challenges for experienced players while also offer the gameplay freedom to overcome them in various ways. Complexity plays an important role here and the production chains are a core gameplay element of the game. We don’t want to have a too difficult start for new players, especially as veterans usually rush through the early portion of the game with ease. In the spirit of the industrial revolution, we want to raise the complexity when advancing through the tiers.

Enterprise737
Will there be a visible difference between the citizen tiers? Like a distinctive working class district which is separated from the other classes.
Basti: Civilization tiers are more than a game mechanic as they play a leading role to bring the 19th century to life. Keep an eye on the Union, as we will highlight that topic soon.

AmpeImann
Quick question, do we actually need to register to participate in a focus session, or will active Anno Union members be invited to participate without having first to apply to participate?
I haven’t seen anywhere to apply yet, am I missing something or have applications not started?
Basti: Applying for the focus-tests is mandatory for everyone. Rest assured that we keep track of the Union activity of players who apply for a test. Here the link to the application page: https://anno-union.com/en/playtests/