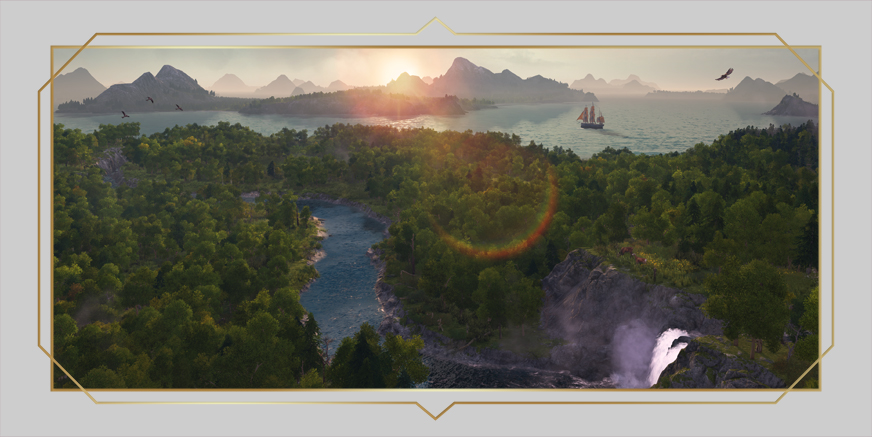 Before we handle the needs of our residents in this weeks DevBlog: Happiness, we will tackle some community questions in todays Union Update.

Thaliruth
I have a question coming from how other building games do it. I cannot recall Anno games ever having some kind of maintenance mechanics for buildings, such as that they wear off after a while and have to be repaired. How is it with 1800? Do we need to maintain buildings in order to keep the production going?
Answer: Buildings will not wear themselves out from usage and therefore there is no need to perform any maintenance actions. However, incidents such as fire can damage buildings, which will regenerate over time. Ruins on the other hand, have to be manually refurbed by the player. When it comes to harbor defense, repair cranes serve as a measure to maintain your damaged defense structures. While the idea of a maintenance mechanic for buildings sounds interesting for the early game, it would have an extremely heavy micro-management impact in the mid- and late-game. In Anno, you construct not only hundreds or even thousands of buildings across multiple islands and sessions, you also have to take care of trading routes, your fleets and to manage complex logistical networks.

Jinkha5
What if I spent all my influence on a big fleet of ships and then want to change my strategy to use a ton of items or settle on many different islands?
Answer: That depends on the size of your empire, as the amount of influence points is bound to your population. Even if you spend enough points on one category to benefit from the bigger global buff, you will have still some influence at your disposal to invest in other categories. You can also downsize your fleet to reinvest the points in different categories. The military category will allow building fleets at a size and scope previously unseen in an Anno title but a total focus on military won’t be necessary to build up a strong fleet.

Das_ist_Phil
„Investing in Expansion will allow you to settle on more islands, …..”
Does that mean that we will be restricted from the get go? We won’t be able to settle on an unlimited amount of islands and NEED to invest in the expansion category?
Answer: Players who like to steal islands away from AI or other players as fast as possible will need to invest in the expansion category in order to do so. Most players however won’t even need to spend any influence in the beginning, unless they pursue a rush strategy at the start of the game. This way, during the early game influence is especially relevant for players who want to fully commit to a certain playstyle, such as expanding quickly in all directions or to rush a production pipeline to have a large fleet of battle ships as early as possible. When it comes to the “Expansion”category, there is something you have to keep in mind: additional islands will automatically generate influence alongside your growing population (unless you are just claiming new land without establishing settlements). If you just establish a few production islands, you won’t need to spent much (or even any) influence at all but if you want to prevent other parties from expanding, you will need to invest. Players who want to build huge empires don’t need to worry, as influence has no upper limit and will grow together with your empire and its number of inhabitants.

Hexagon19
Is it correct that gramophones are produced by engineers? It makes sense to a degree, but will investors even provide any form of workforce? I also think that it would make more sense that the artisans create the ornaments for the gramophones, instead of the engineers.
Answer: Not all production chains are final yet, as we are still working on balancing, which is also affected by feedback from our focus test groups. It is also important that we find a good distribution of all workforce, in order to ensure that each residential tier is equally relevant, and remains so even in later stages. If we notice that we ask for too many engineers in one production tier while artisans are being left out, we will sit together to find ways to have the workforce distributed more evenly. Since we started developing the game, we had to re-arrange and sometimes even completely change different production chains. But there is one overarching rule: the workforce from all residential tiers stays relevant throughout the whole game.
Investors are different, as they will not provide a typical workforce for your production chains. However, the amount of investors available will play a role when organizing events that are hosted at the world fair.

Ger_Lunak
Will there be a Beta phase for final polishing and bugfixing?
Answer: In order to improve the game, we will continue to make use of our Union focus test program, but also have larger scale testing phases with a lot more players later on.

Frederic440
I would really like to see that every residential tier would get their own enhanced version of the basic kontor. IN the tradition of Anno 1602, it would be great if the enhanced kontor would be available as a project from your construction menu instead of upgrading automatically.
Answer:  While the kontor will not automatically upgrade with every new residential tier, you will be able to upgrade every kontor as well as you warehouses in several stages.