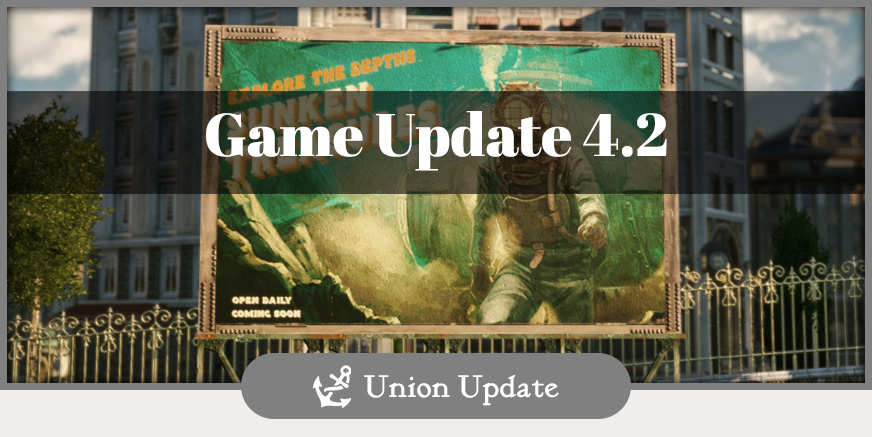 Once again, Europe’s biggest video game expo will open its doors on August 20. in Cologne, Germany. And to keep the tradition, we will bring Anno 1800 back to our Ubisoft UplayLounge, where we show you the newest Anno content and invite you to community QnA sessions. And while we won’t have stations to play Anno 1800 this year, we will also hold daily stage presentations on the big Ubisoft stage and rest assured, we will also have some Anno news to share.
We will share the exact times for the daily UplayLounge and stage presentations next week.

But before we can focus on gamescom 2019, we have another small Game Update for you, which will tackle some of the bugs which came with the latest DLC “Sunken Treasures”

Fixed an issue where some piers and trading posts were not correctly registered by trading ships. Ships will now check all available options to unload their cargo when stopping at an island.

Fixed a minor issue where the Sunken Treasures discovery expedition would still get triggered even after the player declined to start it.

Removed a blocker in the Sunken Treasures “Build Harbor” Quest that occurred when the player built and upgraded the harbor directly before solving the first quest given by the queen.

Fixed a bug that deleted all blueprints in the session when destroying a trading post on a player-controlled island.

Fixed an issue where scrap was selling was sometimes for an unintended high amount of money.

Game Update 4.2 will became available for all players at 6pm CEST.

We’ll also have a very special AnnoAfternoon this Friday, where our Settlers Community Representative Oliver joins Guddy in an (hopefully) epic diving adventure. But beware: It will be in German this time.

Tune in this Friday, August 9th at 3pm UTC on: https://www.twitch.tv/ubisoftbluebyte