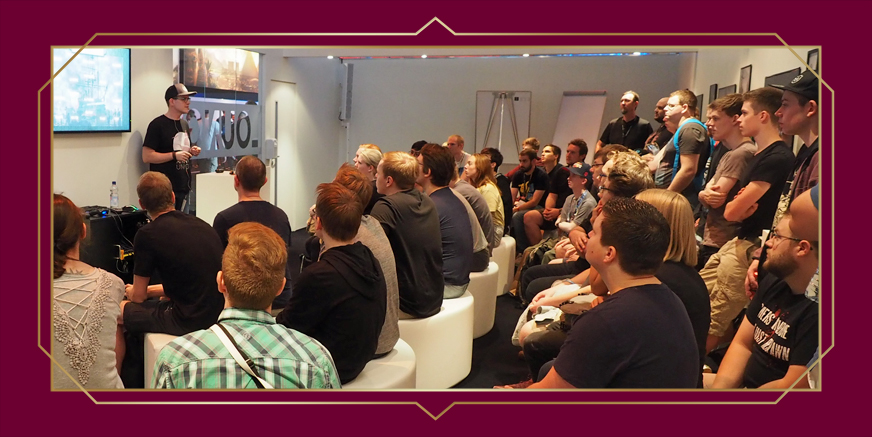 On Tuesday 21st of August, we raised the curtain to reveal Anno 1800 on the first day of the world’s biggest gaming convention. Moreover, we kicked off the new Anno Union community initiative with an overwhelming amount of positive feedback. We would like to provide some details about the big reveal and the Anno 1800 talks in the Gamescom Ubisoft lounge.

First things first: a big thanks to all of you from our whole Ubisoft Blue Byte!

When we pushed the button to announce the game on Tuesday morning, we could not grasp the amount of positive reactions from Anno players around the world. From all the fans registering and commenting on the Anno Union, to all the players out there on Social Media and other channels.

From Tuesday to Saturday, fans had the chance to visit us at the Ubisoft Lounge for exclusive first hand presentations of Anno 1800. During the presentations, our Community Developer Bastian Thun gave detailed insights about Anno 1800, especially our concept, the game itself and plans for the future. We explained where we are coming from, what we have learned from previous titles and presented our vision for Anno 1800 as well as the Anno Union. For anyone who was not able to attend, we will share these details with you all on the Union pretty soon.

With our surprise announcement of the new game, we were uncertain how many reactions we would get and how many people would attend. It is safe to say that it was a blasting success: Over 600 Anno players visited the presentations, got their first look on Anno 1800 and after that, had the chance to ask many questions during the QnA panel. We got incredibly positive feedback and expert question about game and the Union. While we were able to answer many of them, we hope that it is understandable that with over one year away from launch, some answers had to be vague with the game being in such an early stage of development.

While presenting Anno 1800 and talking to so many long time and new Anno fans, the Anno Union website left the harbor for its maiden voyage. With thousands of people registering, commenting and voting, we even had to close down the comment section for a brief period. Rest assured that we are not done with the website yet as we are already setting up a list for improvements based on your comments and our observations.

So what is next? We know that you guys are hungry for more details. To give you a short teaser for upcoming content: There will be more details about the game and plans for the Union coming as early as this week, so keep a close eye on the Anno Union. While we are preparing the new content, our team is also busy going through the crazy amount of comments and we can tell that we will address some of your feedback as soon as possible! This will not just happen in the form of new blogs, we can tell that we are currently also busy tinkering on our new streaming setup to provide the Union with interactive streams, videos and hangouts.

In the meantime, happy commenting on Anno Union and before we forget, had anyone of you the chance to attend to Gamescom 2017? Say hello and feel free to share your thoughts about the Anno 1800 presentation!