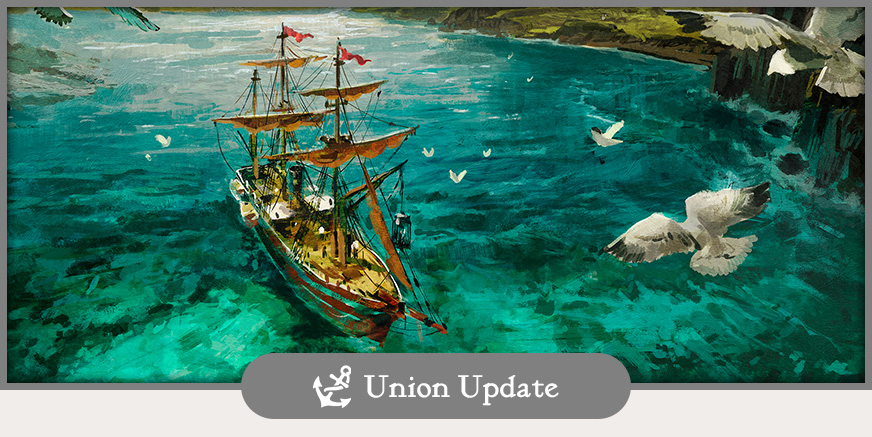 You asked us earlier if we plan to add new things to the game after the big release and last week, we let the cat out of the bag (gentle-cat doesn’t mind) about our season pass and free updates during the post launch of Anno 1800. With our announcement of the season pass, we also recorded a video for all of you where we talk about our plans to expand the world of Anno 1800.

Union Talk
Luckily, Basti was far from alone with our small release celebration on Twitch. Thank you to everyone who joined our rather spontaneous stream, we had a “jolly” good time especially thanks to so many Union members chatting with us during the show.
And when we kicked off the party, we released our third Union Talk video which was, of course, pre-recorded. (Just because some folks in the chat asked us questions).

And in case you missed the whole party stream, you can watch it now here:
Highlight: AnnoCast – LAUNCH PARTY von ubisoftbluebyte auf www.twitch.tv ansehen
Last but not least, let’s talk about your feedback and reports.

Patch incoming after the easter weekend
We are working on a patch update to fix some of the issues you reported to us. The patch will hit next week on April 25 and here are the patchnotes:

ANNO 1800 – Patchnotes (Patch 01, coming 25.04.2019)
Fixed several crashes.
Fixed several Multiplayer Desyncs.
Fixed an issue for the Steam version, that made the games FPS drop significantly.
Fixed a rare issue, getting no further quests, after loading a savegame that has been created while a Newspaper was displayed.

We will continue to improve the game in the future so keep up the good work and share your feedback in the Ubisoft Anno forum. With that being said, we had an incredibly exciting, successful as well as very busy first launch week. As there are two bank holidays about to come up in Germany, we will recharge our batteries in over the long weekend and will be back in the studio next week Tuesday.

Thanks to all members of the Anno Union for that incredible launch week and keep in mind: leave the PC once in a while to get a coffee or to stretch your legs! 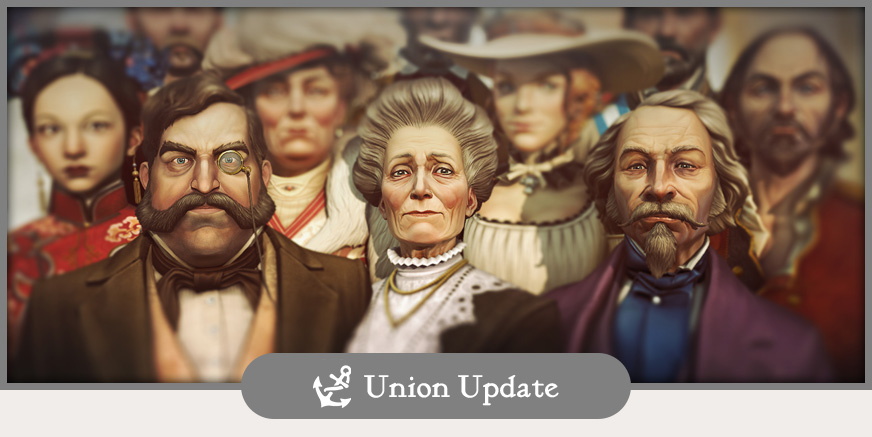 Welcome to another week in the Anno Union, this time with an introduction to the cast of Anno 1800 second party characters as well as an update to the streaming schedule.

Meet your rivals!
Originally planned for the end of last week, we prepared a video for you showcasing the variety of AI opponents which will be able to choose as your dire enemy or future to be ally.

Every single rival will have their own character, which will not only define their general difficulty rating but also influence their playstyle.
Since the Closed Beta, we improved their behaviour in many ways and while old chap  Willy will remain let’s say, a slow and simple fella, the AI’s capabilities of defending islands or deciding on various tactics fitting to the situation has improved a lot. As an example, especially war savvy characters will make decisions such as attacking your Harbour directly, engaging your war fleet or launching attacks on your trading routes based on the current situation.

Are you looking forward to testing your skills in naval warfare against the Psychopath Graves or are you more interested in Tea parties with Bente Jorgensen? We are curious to know how important the second party opponents are for you and if you are more the player who likes to challenge themselves with the most fierce of opponents?

Streaming Schedule – 2 streams on the horizon!
As promised during our special German episode of our Community Corner last week, we will have another English episode this week Wednesday at 5pm CET.
While we won’t have a special guest this time, our Community Developer Bastian will not only give you further insights into the fourth tier but also answering your chat questions.

And as one stream is not enough, our Anno Afternoon community crew will return this Friday 5pm CET – Not only Guddy is back on board, we will also jump from the trusty old Closed Beta ship to a newer development version of the game!

We plan to bring you more live-streams in future, from development insights with our AnnoCasts to community focused shows like CommunityCorner and AnnoAfternoon.
If you do not want to miss a show, make sure to follow out twitch channel to receive notifications as soon as we are online. 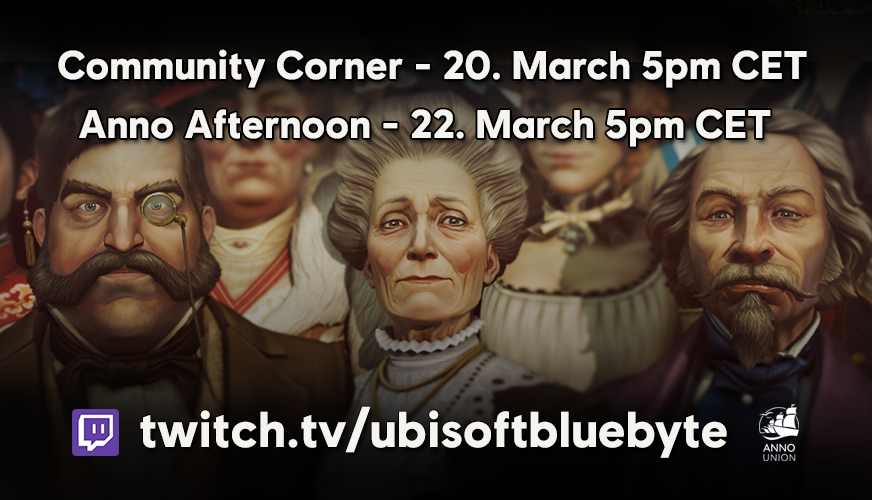 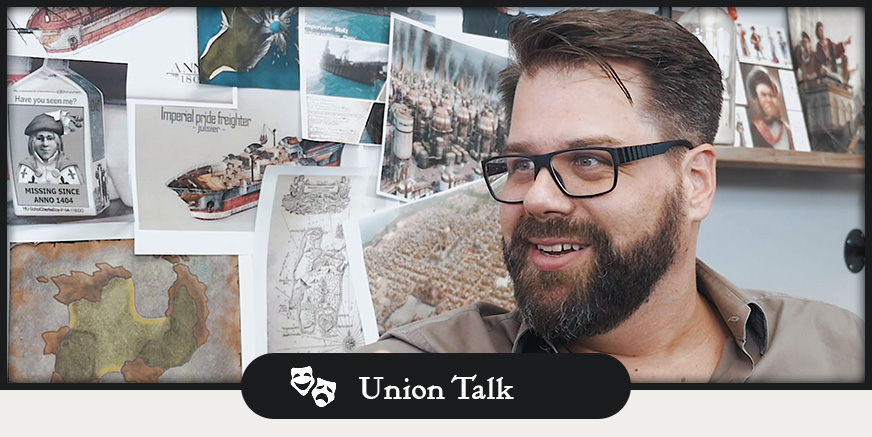 Today, we want to present you our first Union Talk, where we sit together to talk about Anno Union relevant community topics.
With our big reveal in 2017, we invited Anno fans around the world to share feedback to help us developing Anno 1800. Thousands of comments and 120 blogs later, how has the community actually changed the game for the better?
Our Creative Director Dirk “Karrenschieber” Riegert will give you some insights how your comments and participation helped to shape the New World and other important game content.

Let us know if you liked the idea of our Union Talk, is that something you would love to see more in future and topics you would like to see tackled in the next episode?

It has been a crazy few weeks but we are ready to roll. Before we leave to our road to gamescom 2018 adventure, we had the spontaneous idea to hop in front of the camera for a final message from the team.

See you in Cologne!

With the announcement of Anno 1800 and the start of our Anno Union initiative, gamescom 2017 marked the beginning of a new era for the Anno franchise. With the first full month behind us, we thought it would be a perfect moment to start the week with a gamescom recap video, so lean back and enjoy some impressions from the big reveal and reactions to our Ubilounge presentations. Classic QnA’s and Union Updates, such as news about the next vote, will return next week (we will have of course a new DevBlog with a new member of the team for you all later this week).

It surely has been a ride and we are still at the beginning. When we started, we had a clear vision for the Union and it is great to see that our appreciation for our fans and their experience is well received. We only managed to scratch the surface and there is still a huge list of topics to cover up to release of Anno 1800. As with the game, we will continue to improve the Anno Union initiative based on your feedback and might also try new formats, such as our first live stream which will come this October!

We want to thank everyone of you for joining the Anno Union and accompanying us on our journey.

15 Comments
Jump aboard the Anno Union

Jump aboard the Anno Union

The Anno Union sets sail and we need you in Anno’s new community initiative.

Join the team at Ubisoft Blue Byte here in picturesque Mainz in the creation of Anno 1800. Get the latest news, development insights, behind the scenes content and help us shape the future of the franchise, as we regularly invite gamers to share their feedback, vote on features, create content and test the game during its development.

You are not only at the right place to get all Anno 1800 information and updates to come, we also will actively look out for your input in order to use the vast knowledge of our Anno Union member to shape and test our game. Our most dedicated and active Anno Union member will get the chance to play the game as early as 2017, one year before our release.

While there is still a vast ocean to cross before the release, we decided to invite you early. We want to create the ultimate Anno experience together, because your passion is what always drove us. With the long history of the Anno franchise, taking the next step side by side with our veteran players and new strategy fans alike was the logical step to create the game both we and our fans want.

Keep in mind that all the material we will share in the upcoming weeks and months are of a game in a very early development state. We are currently in so called Pre-Alpha and with upcoming blogs, we will update you on the current state of the game as well as explaining what the lifecycle of a game in development actually means.

More details will follow soon, so keep a keen and sharp eye on new content on the Anno Union and jump right away in our comment section to share your thoughts, questions and ideas!

Choose your strategy for victory! Welcome to the next installment in the beloved PC-exclusive strategy city-building franchise.

This is the dawn of the industrial age and the path you choose will define your world. Are you renovator or exploiter? Suppressor or liberator? It’s up to you how the world will remember your name.

In Anno 1800, players will take charge of their own fortune as they navigate the rapidly evolving technological and malicious political landscape of the 19century in their quest to build an empire that will stand the test of time.

Combining beloved features with innovative gameplay in a memorable new setting, Anno 1800 marks the beginning of a new era for the Anno series.