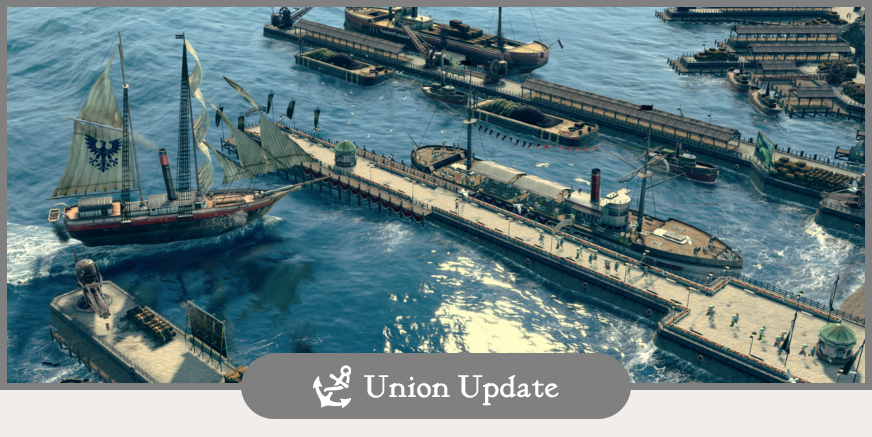 We are back from our short holiday break and ready to tackle the last 7 weeks before Anno 1800’s launch on February 26th. With this first blog in the year 2019, we want to give you a brief outlook on the content to come until launch.

Road to launch
Last year’s Technical Test provided us with lots of valuable data, from player behavior up to bug and feedback reports. Fixing, fine-tuning and polishing is now our top priority for Anno 1800’s Beta period. After the TT, we followed up with another focus test session to get feedback on recent changes but also allowing us to get in-depth detail on other aspects such as balancing and overall gameplay experience, including progression through all residential tiers.
With the upcoming Closed Beta on January 31st, you will be able to see the changes and improvements for yourself as once more, we will invite a large number of players from the Anno Union to test the game.

However, it’s not all bug smashing and polishing- we are also putting the final puzzle pieces together, including one all-new feature we haven’t even announced yet! Between that feature, as well as upcoming DevBlogs about City Incidents, Ornaments and of course Anno 1800’s story-driven campaign, there is still a lot to talk about on the Union.

You can look forward to the first of these DevBlogs to come next week, alongside more information about our Closed Beta. And if you haven’t done so already, keep in mind that you can still register for our Closed Beta by signing up here on the Anno Union.

And if you want to get reminded if a new blog comes fresh from the press or stay in the loop about anything #Anno, you can just follow our official Anno Twitter and Facebook channels.

Winner of the Expedition Event Contest: The Lost Civilization
It was a neck-and-neck race between Hexagon19’s “Isla De Los Muertos” Event and Hojny87’s “The Lost Civilization”, with Argurino’s “Voyage Of The Beagle” also mobilizing many fans rooting for a throwback to Darwin’s journeys.

In the end, “The Lost Civilization” secured the 1st place and we congratulate Hojny87 for making the cut with his exciting expedition event.
This community-chosen event will now get the same treatment from our design team and together with the Union island and the ship variant, will find its way into the game itself.

While we want to continue to funnel the creative power of our communities in future contests after the launch of the game, we want to utilize the voting feature more in the future to allow you to voice your opinion on various topics like favorite game element or balancing.

Streaming schedule update
With more information out in the open and the big launch at our doorstep, we will start a new series of community streams, with the first show starting shortly after the Closed Beta has concluded.
Different from the AnnoCast, the show will be mostly run by our Community Developer and focus on answering your questions while playing the game rather than highlighting a specific feature in detail.
And to give as many Anno fans as possible a chance to direct their questions at us, we will host not only English but also a German episode.

But there is also the next episode of our AnnoCast game dev stream on the horizon: at the end of this month, we will have Narrative Designer Marie on board to demonstrate how we breathe life into the 19th century world of Anno with a great variety of quests and expedition events.

Speaking of streams- we know that many of you liked our ship preview during our naval stream. Hoist the flag and all hands on deck, as the video is now available on our Twitch channel. What is your favorite ship and will you rely on a bulwark of huge battlecruisers or a versatile wolf pack of fast gunboats?

That’s it for this week’s peek at the upcoming content. See you next week, as the final march to release begins in earnest!