DevBlog: The Residents of the New World 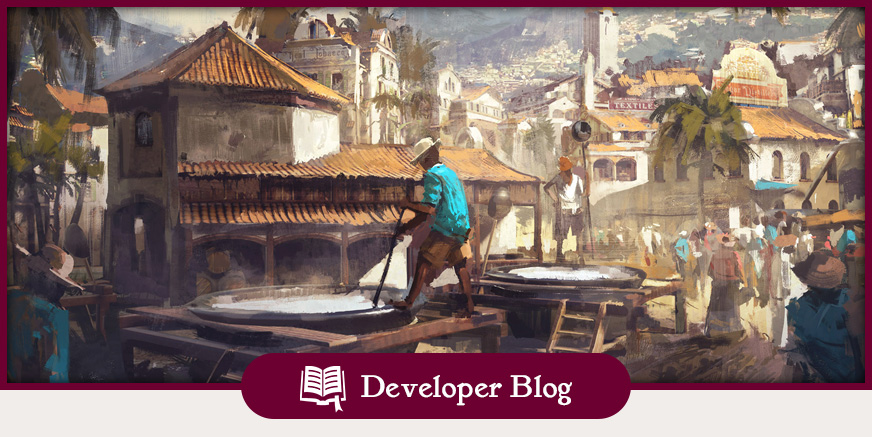 DevBlog: The Residents of the New World

A continent carved by rivers, dominated by lush jungle forests and dotted with ancient mountains. Your Kontor just established on a white sand beach, the first residents settle in your newly founded city and you take a moment to watch the Tobacco leaves grow in the ardent sun.
The New World will leave a strong and vibrant impression and it was important for us that the new residents and their buildings invite the player to sink deep into the atmosphere of that beautiful continent.

Inspired by 19th century Latin America, Anno 1800’s New World residents are bound to their country but other than the dawn of the industrial age in the old world, their story is a tale of building a strong prospering society fueled by the dream of independence.
Beside a set of strong third party characters populating the second session, your settlements will have visual feedback representing residents local to the continent, including models, portraits for residential tiers and new production chains.

Residential Tier I – Jornaleros
Jornaleros are the farmers of the New World, devout and hardworking people who are driven by the dream of independence at a dawn of a new era.
Similar to your first session, the first residential tier in the New World will represent the ways of old, farmers cultivating cotton and cocoa but also participating in traditional crafts such as pearl diving. However, it is also important for us to show respect to their roots and heritage as the Jornaleros are not to color them with the same brush as the Farmers. Working on the fields is hard labor, but by the middle of the 19th century for the first time, they could call the soil they cultivate their own. When the sun sets after a long day, Jornaleros find community and harmony in cultural buildings such as the chapel. 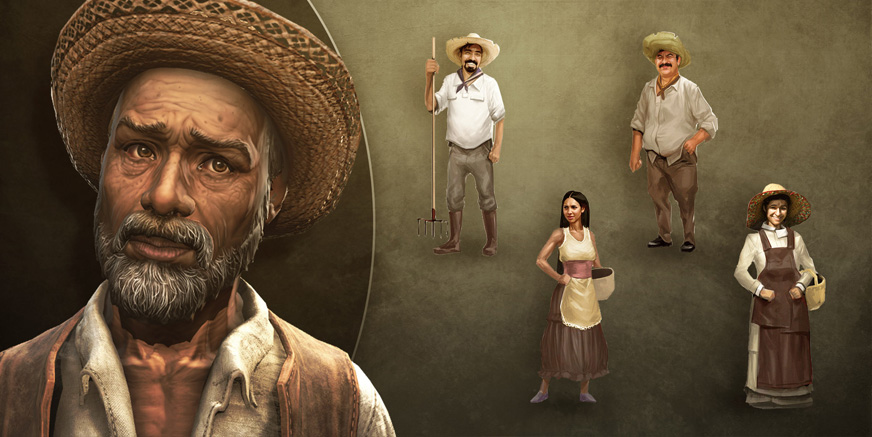 Their farm houses are rather simple but also a pragmatic fit for the hot and stifling climate of their continent. We wanted that their residential buildings convey that they are slowly adapting to a new life and are not built as a long-standing family heirloom. However, not many of them can call a farm their own and it is not easy to build a lasting foundation for a small home on the jungle soil outside of paved cities or large haciendas. 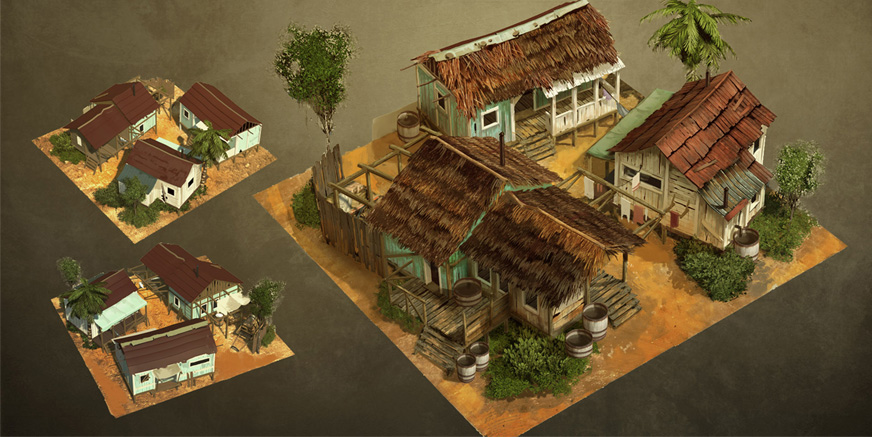 This concept art gives you a good idea about the flair of the Jornaleros homes.

Cocoa, Bananas or Pearls, which seem almost ordinary to the Jornaleros, fetch a high price to fulfill the craving for anything new and rare in the high society of the Old World. But while they call even common plants like sugar-cane “exotic”, the life of the New World residents also changed when goods from across the ocean became an integral part of their life. Centuries of influence brought new goods to their continent, some of them now cultivated on their own land while others are in high demand as imported luxury goods. 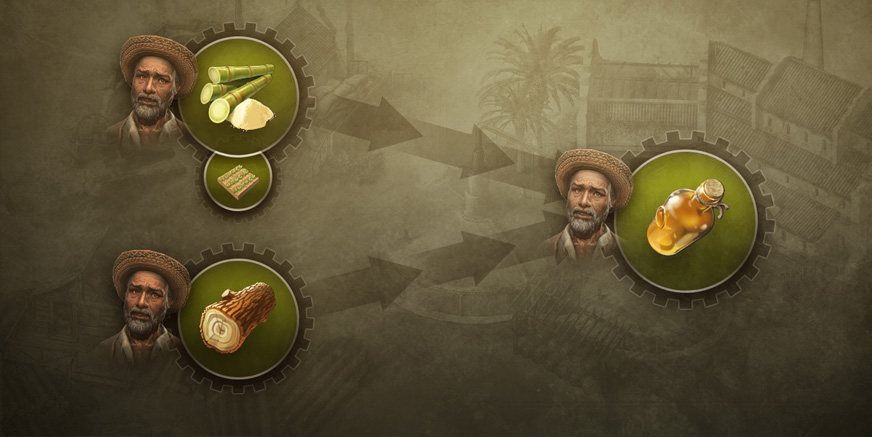 Rum export is big business in the 19th century, as there is a high demand for the drink in the Old world.

Residential Tier II – Obreros
When the power monopoly of the Old Worlds monarchy crumbled, the Orebros managed to take advantage of the new trading deals and connections to the rising class of financial entrepreneurs. Their new prosperity allows them to import expensive crafted goods such as sewing machines and they value a distinctive lifestyle based on old traditions, which grows confidently into a promising future.
Their settled city lifestyle also offers amenities for their society, from healthcare provided by the local hospital to entertainment during a visit at the boxing ring. 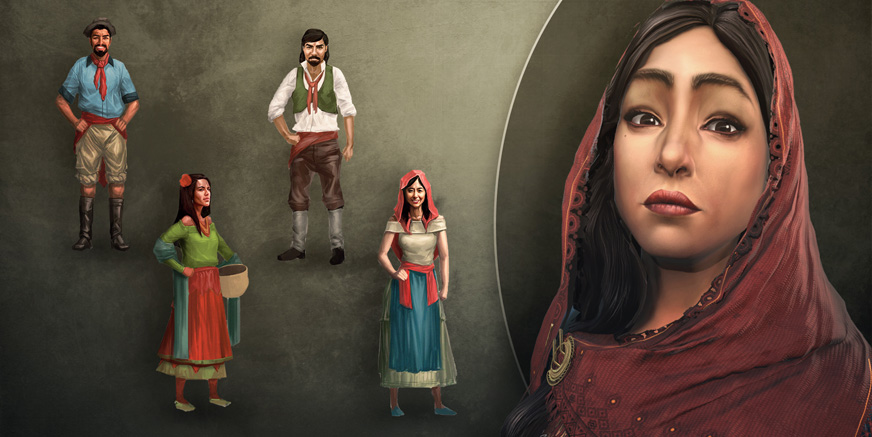 The Obreros are the residents of the new worlds who found their way from the farmlands into the cities, where they found wealth as tradespeople.

Some of their residential buildings have a long history but over time, the Obreros gave them their own character. As many of the Obreros grow accustom to the city lifestyle, their houses were built with lasting stone and they are more likely to spend their new wealth on their homes for the generations to come. 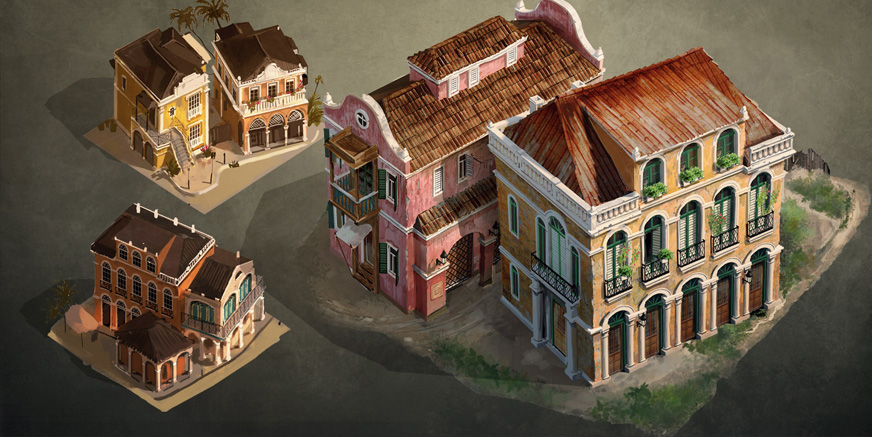 The residential buildings of the Obreros depict an urban lifestyle still fitted to the climate.

The lounging investors and engineers in your metropolis cannot get enough of their imported cigars and chocolate but the real driver for the economy lies in precious gold and oil. Almost all goods you export into the Old World serve luxury needs and making your money aristocracy happy will challenge your smart management skills and require an elaborate trade network. 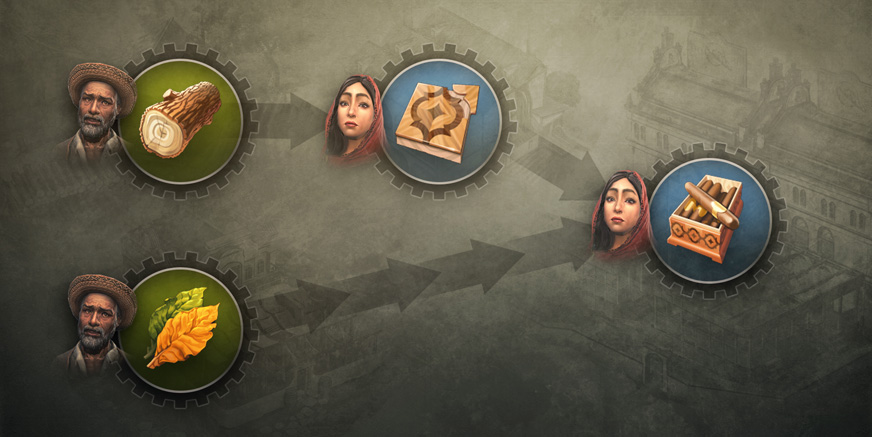 Goods produced in the New World will serve as luxury goods in the Old World and vice versa.

Gold is hard to get by, which results in a heavy demand in workforce for prospecting the luxurious metal in several mines in order to ensure a profitable output.
But oil was the real game changer to bring progress and a thriving economy to the New World.  While some few oil fields will be available in the old world to cover the need for basic electrical supply, you will need to tap into the rich oil resources of the New World if you want to support your power economy and make your investors happy. The oil towers surrounded by jungle provide quite a vista, but the fossil fuel not only wants to be pumped out of the ground but also conveyed to the oil harbor and then distributed in large tanks to your Old World’s metropolis.

A lush continent with a vibrant society
The New World will carry you away with its details, offer new and challenging production chains and invite you to meet a rich set of new third party characters and to explore it’s story in the campaign. But Anno 1800’s campaign is a story for another day and with that brief look over the two production chains, we bet you have many questions about the New World session.