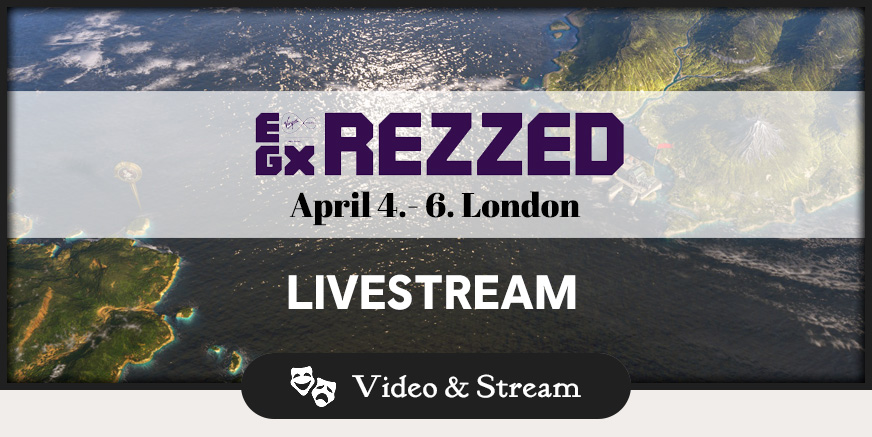 Annoholics, we’re live here at EGX Rezzed in London, where you are able to play Anno 1800 shortly before launch. Come and visit us at our booth. We won’t bite! It’s been a pleasure so far and we are looking forward to meet you guys.

If you are not able to be in London in person don’t worry! We will stream this afternoon and you are welcome to join us online! Watch the Anno 1800 panel from EGX Rezzed in London LIVE at 5pm CET/ 4pm GMT.

UPDATE: The panel has ended. You can watch the Stream here: 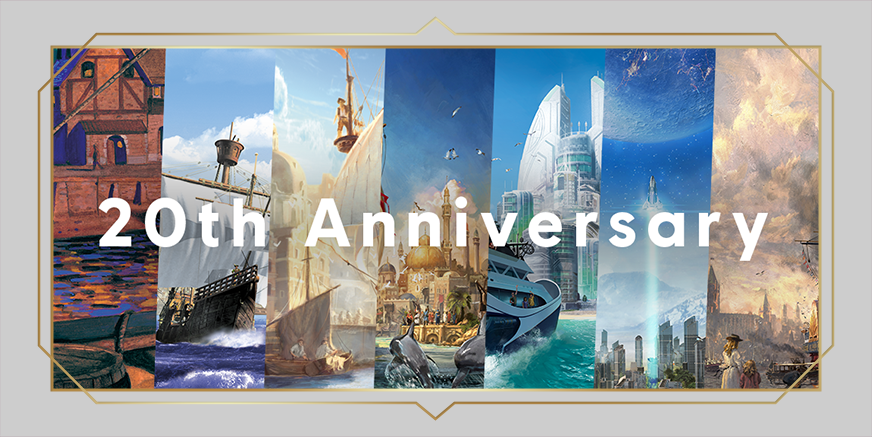 It was 20 years ago, in March 1998, when the Anno series first raised anchors and set sails to conquer the PCs of gamers everywhere. Anno 1602 would go on to have a long lasting impact on strategy fans and the genre, spawning six follow-up titles in the main PC series over the next two decades- not to mention several other adaptions and spin-offs on platforms like the Nintendo DS, Wii, mobile or tablets.

To really take a trip down memory lane, and to make those of you who were with us from day one feel sufficiently old, let’s take a look at the game’s system requirements:

For the younger Anno fans among the audience- yes, that really says 16 megabyte (!) of RAM. The times, they are a-chaning in the Anno world! Another fun anecdote is that at the time of release, both gamers and gaming press alike stylized Anno as the big new challenger to Blue Byte’s beloved Settlers series, which was at the time the benchmark title in the historic city-building genre. Fast forward two decades, and the once fierce rivals are now a happy family united under the Ubisoft Blue Byte banner, with our Düsseldorf studio working on the ever-popular Settlers Online, while we in Mainz develop Anno 1800. It is a small world, after all.

With Anno 1800, we want to go back to our roots while utilizing the knowledge we gained over so many years. From humble beginnings 14 years ago, the team has grown together with the Anno series and our fans but many old veterans are still part of the team, while new additions to the team bring their creative and inspiring visions to the table.

While this week marks the 20th anniversary of the series, we want to celebrate Anno and our communities of fans out there throughout the whole year. Starting this week, we will host a small celebration live-stream this Wednesday at 4pm CET. There is enough space left in our time machine, so join us when we play old classic while probably eating some cake and losing ourselves in memories. There will be probably some talks about CRT monitors. However, keep your expectations in check- this stream will be about the series’ history, and won’t include any Anno 1800 news or footage.

Complete your Anno Collection with the Uplay Spring Sale
Did the nostalgic trip down memory lane make your fingers itch for some old-school Anno? If so, you are in luck- the Uplay Spring Sale is running all week until the end of March, including some great discounts on all the older Anno games and DLC packs. It is the perfect excuse to complete your collection in one go!

Anno Cast 03 aired last Thursday
Last week, our Anno Cast streaming show finally came out of hibernation. In case you’ve missed it, you can just watch the saved broadcast on our Twitch channel.

During the show, we answered some questions from our community, chatted a bit about the development process and demonstrated how the trade routes work in our gameplay section. Here are some of the answers from our stream:

OneClickLP: Why is the sun moving together with the camera, resulting in shadows turning with the camera angle?
Answer: When playing the game, you move the camera around a lot while also going through different camera angles. We want that, no matter from which angle you play, you always get the best scenery and lighting, which has been an Anno hallmark since the early days. However, you can choose whether the sun is moving with the camera or should remain fixed in the options menu.

loex1337: Talking about the working conditions, will there be sings for an imminent strike?
Answer: Yes, there will be visual feedback in the game and also context menus which enable you to get insights into the current happiness and developments in your city.

BlueBreath: I wonder if you also implemented an operating costs adjustment for buildings proportional to percentage of filled work spots.
Answer: A factory has not necessarily less operation cost if you are not able to keep your production fully going. However, things like that are in fact more complicated in reality. For Anno 1800, we do not want to overburden the micro-management part, so the operation cost won’t be affected by the working conditions.

Community: Is it possible to get high definition pictures from some of the concept arts and other screenshots you used on the Union? I would love to use them as a wallpaper.
Answer: We are currently working on a big web update and a new community section will be an important part of that. With the new community section, we want to create a space to highlight community creations and fan sites but also provide wallpapers and some other requested assets.

Palemale53: Will I need to satisfy the needs of my inhabitants separately on each island?
Answer: All buildings unlock globally but if you establish a second island, you will need to fulfill your residents’ needs in order to level them up to higher tiers or to keep them happy.

banan1996.1996: How does transferring workforce between island work? Will ships be needed for that?
Answer: You won’t need to build or use your existing ships to transfer your workforce. However, there will be a proper visual representation for workforce being moved to other islands. The system will have some similarities to the energy transfer from Anno 2070, but we will share more details at a later stage.

XGrindYourMindX: Will there be unemployment or is workforce overhead just waiting quietly?
Answer: We tried many things during the early conception phase but we do not think that managing the employment of your residents would do the game any favor. With other resource, operation cost and especially construction management (not talking about trading and other economic aspects), the game can get already pretty complex and deep if you want to make use of all features.

zelsphere: My guess is all these beautiful buildings must be using 2k resolutions textures, with diffuse, spec/gloss, and normal how are you you able to run the game so smoothly with all these buildings utilize such high texture maps?

Dawnreaver: Would it be possible to go into more detail on the technical aspects? I know that previous versions of the engines worked with LODs, but do they also batch the textures?
Answer: Indeed we can’t keep all the textures in memory. We dynamically load them depending on the current camera location in the game. Textures that haven’t been used for a long time are kicked out of memory. One challenge for a strategy game is the highly dynamic camera, e.g. sudden camera jumps via the minimap: If a building’s texture is suddenly needed but isn’t loaded yet, we usually have at least a low-resolution version in memory. In the meantime the high-res version starts loading in the background. With that said, a buildings’ texture size actually depends on its grid size, so a 3×3 building has smaller textures than a large factory. Finally, our buildings usually have albedo, normal, gloss, metallicity and ambient occlusion textures, all BC7-compressed. Some of them are packed into other ones (e.g. normal and gloss are a single texture map)

We are looking forward to the stream this Wednesday and hope that many of you join to share their own Anno anecdotes with us. As the Easter weekend is coming up, there won’t be a DevBlog this week, and no Union Update next Monday. 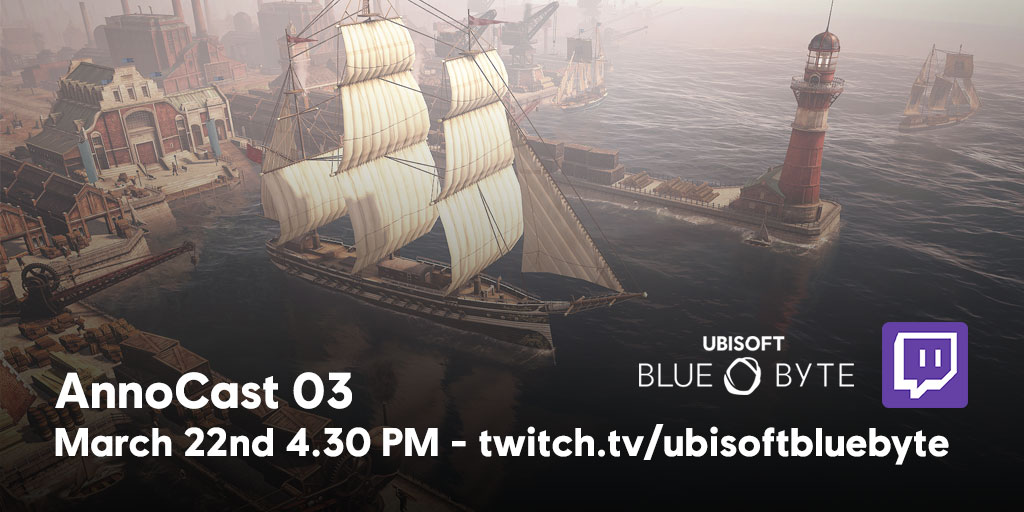 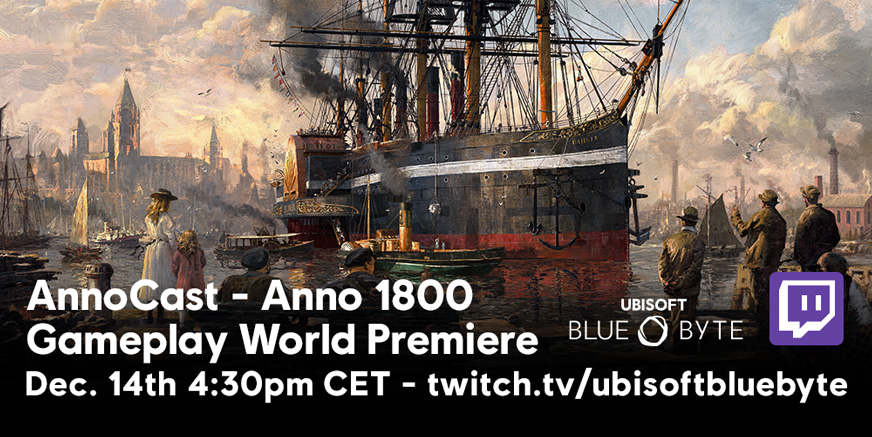