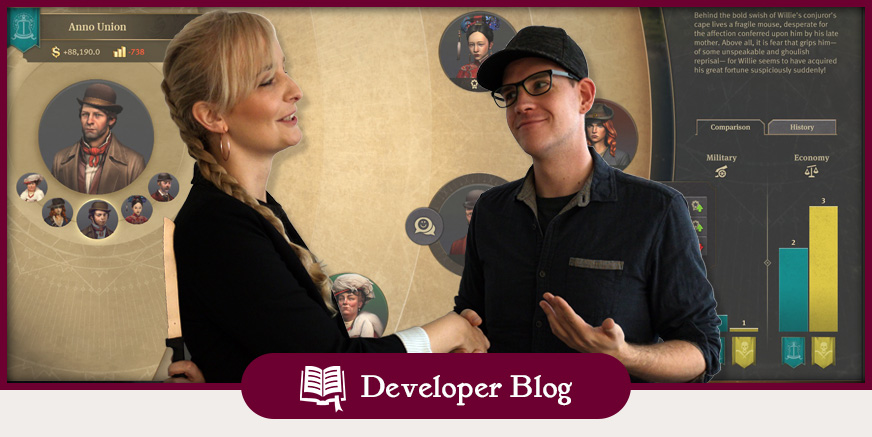 Hi, my name is Andrea, and I’m the Game Designer for Anno 1800’s Diplomacy feature. I’m pretty new to the Anno team, as I only joined in January of this year. Since I grew up with Anno, starting with Anno 1602 when it came out, I am still super thrilled to now work on this series myself! How cool is that?

I love city builders and management games, and adventures in the broadest sense. Recently I played They Are Billions, Project Highrise, The Red Strings Club and Deltarune.

The 19th century – a century of back-room politics
Creating a metropolis from rags to riches is one thing, doing that while competing with other characters over territories is where the Anno series stands out. During your journey through the world of Anno’s depiction of a 19th century, you will meet many different ambitious or even ambiguous personalities. It is up to you if you approach them as an opportunist seeking a profitable trading alliance or as a ruthless warmonger trying to dominate the other factions.
To breathe life into the world of Anno 1800, every single character not only has a standing with the player character, but also with each other, ranging from love triangles to hate relationships.
Every non-player character populating your island world has its own unique personality traits, and our diplomacy system allows you to interact with them in various ways: from forging alliances to raging relentless war campaigns.

How will the world remember you? – Anno 1800’s reputation system
The motor of our system is fueled by reputation, which represents your standing among the various second party characters as well as Anno’s ruthless pirates. Neutral factions are an exception as they are not in an active competition with the player and therefore are not part of the diplomacy system.
But more than just a rating for the players standing, reputation also takes the relationship between the non-player characters into account. The rating itself is in constant flux, as war driven actions of one character will constantly affect the opinion and therefore the reputation with another second party who dreams of a peaceful economic utopia. The longer the game goes, the more likely it is both characters will break their treaties, and even start their own personal war against each other.

Reputation is also the deciding factor for any diplomatic action in the game, which allow you to negotiate different treaties with the second party characters or pirates. 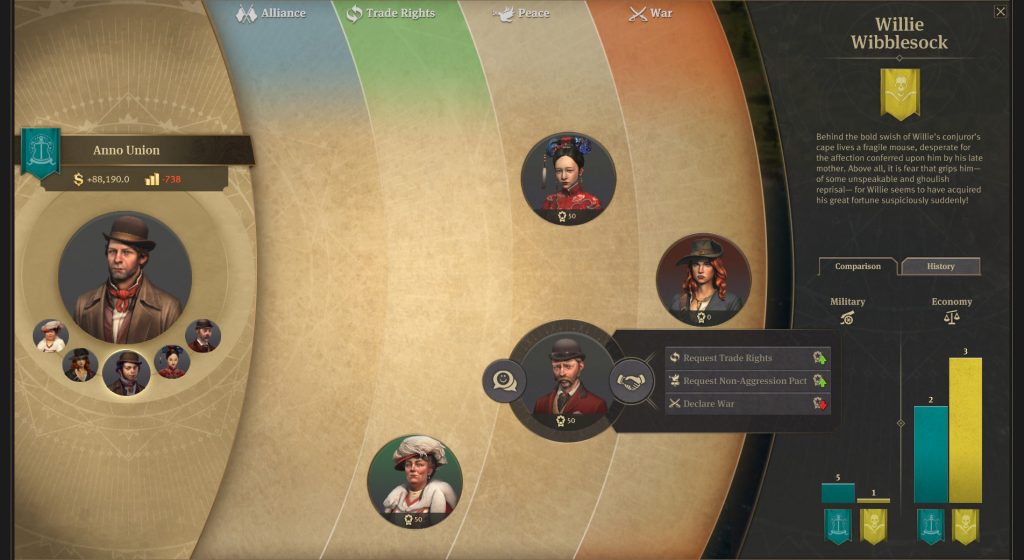 Here a quick look on our Anno 1800 diplomacy window.

Raging war or forming alliances – Treaties
There are four different treaties in Anno 1800. The success of signing a treaty depends on the reputation between characters as well as on their personality. A leery character might be way more open in engaging in a trading agreement than a selfish baron. Let’s have a look:

“Alliance” – Allies will protect your ships and harbors when under attack. When you declare war on somebody, your allies will follow you into war. Forging an alliance usually requires a high reputation between the involved parties.

“Trade Rights” – Easier to achieve as an alliance, this treaty allows you to trade goods with the involved party.

“Peace” – A peace treaty ensures that both parties are not engaging in any combat actions against each other. The treaty is effective until one of the two factions breaks the peace condition, namely by declaring war.

“War” – When declaring war on a party, your ships can attack all vessels of the other party. Any trading relationships cease with immediate actions, and other parties who might be in an alliance with your now declared enemy might also support the war effort of their ally. So you better check twice who might be your enemies!

In addition, there are pacts in the game which are agreed on only for a limited amount of time. While such a temporary pact is effective, both parties are unable to declare war on each other. This pact cannot be broken by either of the parties before time runs out. This is very helpful when you know that for the next minutes a surprise war declaration of that double-minded brute Alonso would ruin your day.

Family ties and popularity contests – Diplomatic negotiations
The likeliness of negotiations being successful is determined by the reputation rating. Naturally, it is in the interest of the player to change the standing with a character to have a higher chance for negotiations to result in the desired trade agreement or even an alliance.

Depending on the character themselves, they might also ask *you* for a treaty instead. This will of course only happen with friendly characters that want to make progress through this treaty – or who only want to protect themselves via a Non-Aggression Pact for example.

For all decisions, depending on it being a military or an economic issue, the diplomacy parties will consider how much stronger or weaker they are than you. Friendly and easy characters will not deeply care how much wealthier they are than you when thinking about accepting trade rights. Strong and stern characters on the other hand will carefully think about a request for peace, and only accept it if they are way inferior to you.

So how do you influence the other parties’ reputation towards you? There are four direct ways:

Apart from these direct actions, there are also some several passive, let’s say “hidden” actions. That’s also why we are not going to spoil too many examples here…

Artur Gasparov, the visionary architect, will love the effort you put into an impressive museum. On the other hand, his standing to you will sink if you build a lot of factories – pollution is a gross and detestable thing for Artur.

As a visionary architect, Gasparov is not really a fan of your unsightly factories!

Alonso, the war-hungry maniac, will grow to like you more when you start a war with another party. And Beryl O’Mara, the lady of organized crime, will not like it if you declare war on her underling Willie Wibblesock.

“You want to declare war on my dear Willie? NOT WITH ME!” In Anno 1800, different characters have various relationships or even feuds linked to their backstory.

What kind of diplomat are you in the Anno games? Do you want to be friends and allies with everybody, or with just the ones you like the most? Or are you excited for the challenge of war and want to fight everyone? Tell us in the comments!